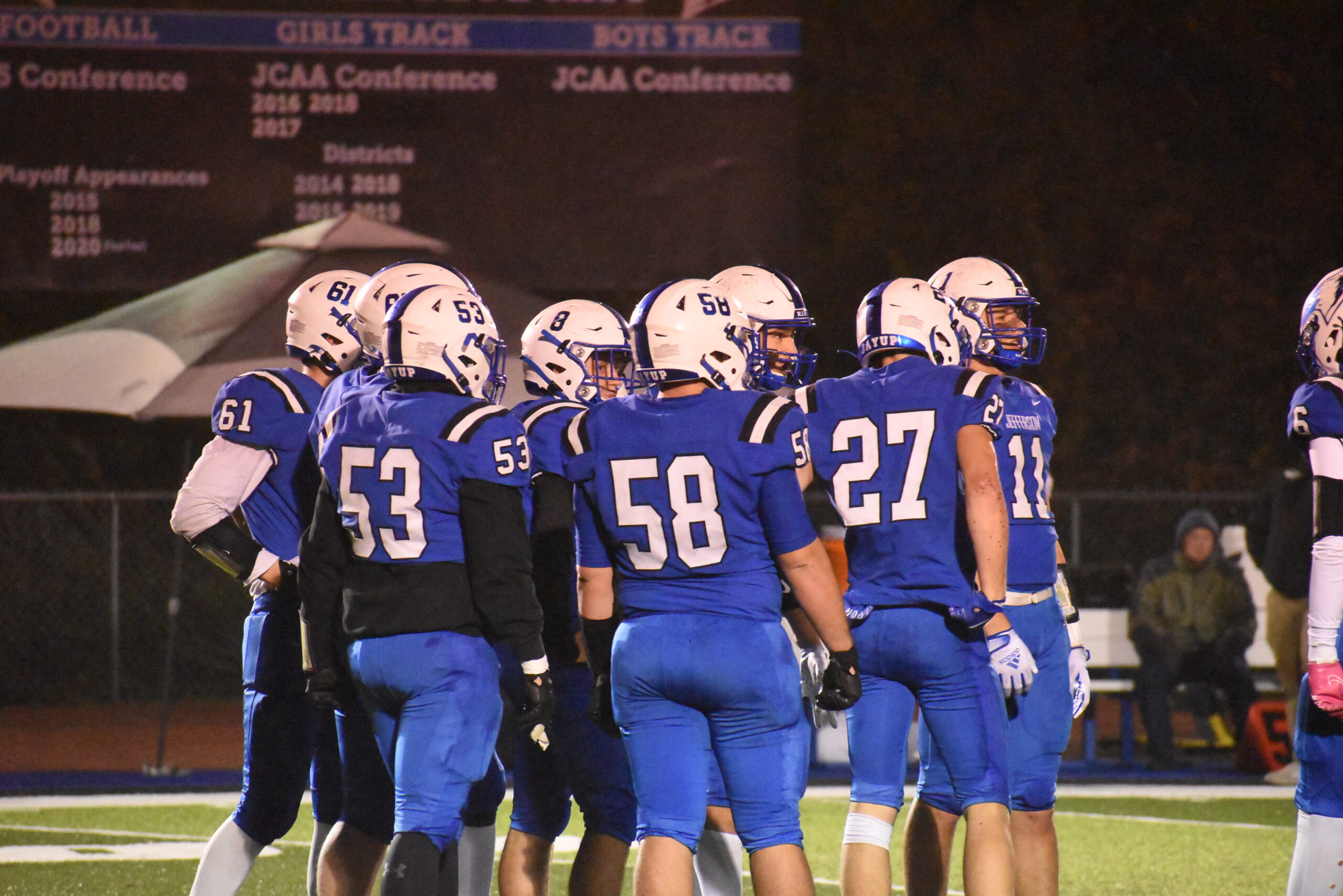 Preview what’s in store for the Jefferson Blue Jays this football season as Ameritime Sports breaks down their 2022 schedule.

The 2022 Varsity Schedules have been released, which means it’s time to start getting pumped up about the highlight reel catches, breakaway touchdowns, bone-crunching hits and last-second victories this year inevitably has to offer. With the season creeping up around the corner, Ameritime Sports is ready to take its annual deep dive into the teams’ schedules. Now it’s time to check out what’s in store for the Jefferson Blue Jays.

Last season the Jefferson Varsity Football team had an impressive 7-3 record, but were unceremoniously bounced from the MO State Tournament in the first round of the playoffs, losing to Kelly on the last play of the game, by one point, 22-21. It was a heartbreaking finish for the Blue Jays who looked poised to make a strong run at the title. The boys had successfully secured second place in their district, with a 4-1 record before the season-ending loss.

Scoring was never the issue as the team racked up impressive victories, including scoring at least 50 points, on three different occasions. The offense mustered 364 points in total, averaging 36.4 per game. The defense was stout as well, only allowing 148 points against, including four shutout victories.

August 26th is just around the corner, and Jefferson will travel to Fredericktown to open the season. Last year, the Blue Jays whomped the Black Cats 50-0, in an impressive offensive display. Fredericktown wasn’t much offensively in their season, only scoring a total of 200 points, going 0-4 in their district and a 3-7 overall record. It’s never wise to take any team lightly, however, the Blue Jays should have a great opportunity to start off 2022 on the right foot.

Jefferson will get their first home game of the season on September 2nd, against Cuba High School. If ever there was a possibility for a strong home opener, this is Jefferson’s chance. The Wildcats were a lowly 1-9 last season and gave up over 400 points. The Blue Jays mopped up last year in this one 41-0. Unless there’s an incredible crop of freshman athletes in Cuba, MO that no one knows about, expect a similar outcome.

The Blue Jays will head to Herculaneum on September 9th for a Week 3 battle. Last season, the Herculaneum Varsity Football team was the definition of middling. The Black Cats posted a 5-6 record, but were only 1-4 in their district, with 240 points scored, and 298 points allowed. This was not a high-powered offense with the majority of their points coming in two games; a 52-0 win over DuBourg and a 60-30 win over Bayless… two less than quality opponents. However, they scored twice against Jefferson, in their 48-14 loss, and did last one game further in the playoffs than the Blue Jays. Still, expect Jefferson to show no mercy in this one.

The following week, on September 16th, the Bluejays will host the Lancers from St. Pius. This should be the first real challenge of the season, as St. Pius narrowly defeated Jefferson 23-20 in one of their three losses in 2021. Matched up in week four, this feud has turned into a rivalry as these teams have played close games the last two seasons, splitting victories. The Lancers had a similar record, going 8-3, but 5-0 in their district, before losing in round two of the MO State tournament, to Mark Twain 20-0. This could be a rough night for the Blue Jays who had better bring their best stuff when St. Pius rolls into town.

The Bayless Bronchos will play host in week five on September 23rd, but which Blue Jays team will show up is the question. If last season is any indication, the Blue Jays will be coming off a tough game and could either be looking to take out their frustrations or possibly licking their wounds. Regardless, Bayless has never been a tough football program, as their 0-10 record last season would indicate. Jefferson dusted them 61-20 in 2021 and will be looking to do the same. It’s a good spot for this game because, in week five, both the offense and defense should be firing on all cylinders.

On September 30th, the Blue Jays will host the Pirates of Perryville, a newcomer to the schedule for 2022. After struggling last season, going 2-8 and putting up only 98 total points, Perryville should be a cakewalk for Jefferson. While Jefferson didn’t play them in 2021, St. Vincent did, and they handled Perryville 36-0, before getting beaten 20-13 by Jefferson. If that’s any indication, this should be another big win for the Blue Jays, and a chance to fine-tune their offense.

The new month starts with a trip to Grandview to take on the Eagles on October 7th. Seemingly a decent opponent, finishing with an above-average record of 7-4 while scoring 329 total points, those stats don’t tell the whole story. The real indicator could perhaps be the 49-0 shellacking the Blue Jays provided in 2021. Now, it’s tough to gauge how much better Grandview has gotten, but if history is any indication, they’ve been improving recently. In 2020 they were 5-4, 2-8 in 2019, and 0-10 the previous year. They could be building to a big season, making this game unpredictable.

The next week, on October 14th, Jefferson will host Ste. Genevieve, another newcomer to the schedule in 2022. This could prove to be another test for the Blue Jayss as the Dragons played a mean brand of football in 2021. Earning second place in their district with a 3-1 record, the team was overall a 7-4, ravaging opponents for 446 points in total offense. However, on the other side of the ball, their defense gave up 312 points. With only one common opponent from last season, Bayless, whom the Dragons scorched 56-8, these two teams look like formidable opposition and it may very well be a hard-fought victory for whichever team comes out on top.

The final game of the season will be at home against St. Vincent on October 21st. Last season, the Indians put up a fight before losing 20-13 to the Blue Jays. Despite their 5-6 record, St Vincent put up a ton of offense, rallying for 316 total points, with three games where they scored at least 43. This is not a team to sleep on as last season they made it to the District Finals before losing to Scott City 49-35. This game could be a tough matchup for Jefferson, and one not to overlook as they will need a strong finish to their regular season before heading into district play.

2022 could be another highly successful regular season for the Blue Jays, but the games that count are in November. Nonetheless, this Jefferson team is looking good and with a few key wins, when the dust settles, they could find themselves sitting at the top of their district.

You’ll be able to find all the regions high school live stream games: