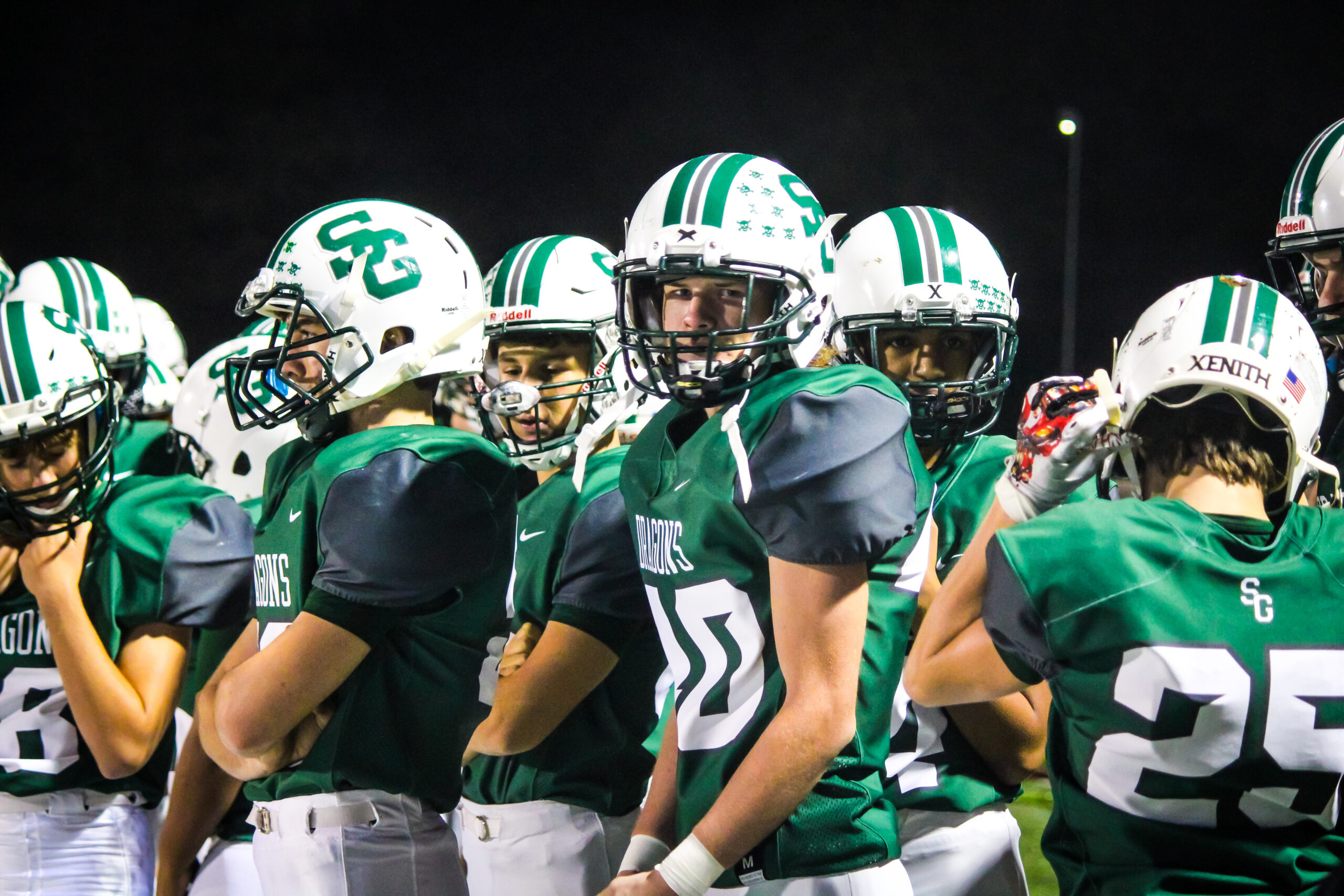 It’s almost time to suit up and hit the gridiron, so check out who the Ste. Gen Dragons will be facing when the 2022 season kicks off, as Ameritime Sports breaks down this year’s schedule.

The 2022 Varsity schedules have been released, which means it’s time to start getting pumped up about the highlight reel catches, breakaway touchdowns, bone-crunching hits and last-second victories this year inevitably has to offer. With the season creeping up around the corner, Ameritime Sports is ready to take its annual deep dive into the teams’ schedules. Let’s examine what’s in store for the Ste. Genevieve Dragons.

Finishing the 2021 season with a strong 7-4 record, the Ste. Genevieve Dragons stepped it up on the gridiron last year after coming off a 4-5 2020 season. The Dragons tailored their offense to their strength, which was their passing game, but struggled at times on the defensive side of things. They amassed 446 total points of offense, but on the flip side allowed 312. Still, they showed they were a force to be reckoned with by scoring over 50 points five times, including a 61-point outing.

Remarkably, Ste. Gen did what most teams could not, which was win on the road. The Dragons were a perfect 4-0 at visiting stadiums during the regular season, but unfortunately didn’t find the same success at home, going 3-3. Their only road loss was in a District playoff game to end the season at the hands of rival Valle Catholic, who seemingly had their number in 2021. That said, the Dragons have returned several starters and will look to continue their air-raid style offense in the 2022 season. With that in mind, let’s look at what lies in the Dragons’ path this year.

The 2022 season will start off on Friday, August 26th, the same way it did in 2021 with a game against Festus. Last year this was a nail-biter down to the wire with Ste. Gen able to score one more time to take the victory 36-31. This year, the game is at Ste. Gen, so that may bode well for the Dragons, who will take on the rather evenly matched Tigers who finished 2021 with a similar 6-5 record. Festus however, did make it one round further in the playoffs and are always tough. Should Ste. Gen be able to run their offense successfully, they will have a shot to bring home the first win of the season.

A schedule newcomer and another big cat, the Affton Cougars, will head to Ste. Gen on September 2nd. The Cougars only managed one win against nine losses last season, but did play some stiff competition. They also have a stud wide receiver and a Sophomore quarterback who started every game last season as a Freshman, so they are certainly trending up. Affton is relatively unknown to Ste. Gen, but this is not a game the Dragons should take lightly.

On Friday, September 9th, the Dragons will head to St. Charles to take on the Orchard Farm Eagles. The Eagles had a middling season, going 5-6 but could pose more of a threat than Week 2 opponent, Affton. Their competition, like their offense, was medium strength at best. The Eagles only put up 223 points and allowed 283 in exchange. The Dragons will have to be on their toes and not take this squad lightly though as they were a bit of a Jekyll and Hyde last season. They have the ability to put up big numbers one night or get blanked on another, but the also added a new Head Coach and the program may be on the upswing.

Next up, Ste. Gen returns home, as do the former graduates because, on September 16th, it’s Homecoming Night. Last season the Dragons topped the Black Cats 55-33 in their first 50-point effort of the 2021 campaign. Fredericktown didn’t do much to impress with their 3-8 record, including going 0-5 in district play, but that means there’s a chance they radically changed their offense. Still, the Dragons were up 42-0 after the first quarter in last year’s matchup and the underclassmen finished out the remaining three quarters. So there’s that. It’s a historically favorable matchup for Ste Gen., but the Dragons still need go full tilt.

On Friday, September 23rd, Ste. Gen will face a tough challenge with an away game at Park Hills Central. Last year the Rebels got the win by a pair of touchdowns, 28-14, but the game was hard fought and definitely closer than the score indicated. Central finished with a nearly immaculate 10-2 record, only losing to perennial powerhouses MICDS and St. Mary’s. Incredibly, the Rebels put up 614 total points, so for the Dragons to allow a mere 28 doesn’t seem too shabby when you consider they scored 76 against Perryville. This will be a battle for Ste. Gen, and will give the Dragons a real gauge of their abilities.

The following week, on Friday, September 30th, the Potosi Trojans head to Ste. Gen. Last season the Trojans got diced up by the Dragons 41-21, but Potosi had some struggles at times last year. They had a middle-of-the-road season and finished 5-6, with around 300 points both for and against them. However, both teams played Fredericktown, and Potosi played them tougher, winning 61-20. This one is a sleeper game that Ste. Gen had better not overlook.

Moving ahead to October 7th, it’s rivalry time as the Valle Catholics Warriors will host the Dragons, and Ste. Gen must be prepared. In 2021, the Warriors took down the Dragons 46-0 in Week 2, then again 69-35 in the playoffs, so the 2022 matchup will likely be a tough one again. However, this year they will battle in Week 7. Perhaps the Dragons hadn’t found their stride yet in 2021, but they’d better not wait around to find out as Valle finished 10-1 last year, and it’s likely they’ll be just as tough. The Warriors racked up 547 total points and allowed only 153, including only 35 in two games to the Dragons. Time will tell, but this could be tough sledding for Ste. Gen.

One week later on October 14th, Ste. Gen will head to Jefferson. Seemingly an even match-up, the Blue Jays will be another diligent challenger. Last season, Jefferson was 7-3, but they had a stellar defense, allowing only 150 points, including five shutout victories. They were no slouches offensively either putting up over 50 points three times, including a 61-20 win over Bayless. This game is primed to be big as the schools didn’t face each other last year, but faced similar competition with similar results.

The final game of the regular season will be on October 21st, and it’s Senior Night. The graduates to be will be hoping to create some highlights against Kelly, a perennially solid football program. They finished  7-4 last season, but faced undoubtedly tough competition. That said, they weren’t an offense machine, as they only managed 196 total points, but their defense was game-changing. Regardless, they’re a tough but potentially beatable team, and that’s a good thing for Ste. Gen, who would love to finish on a high note.

The Dragons have some tough tests in 2022, but there are some layups on the schedule as well. If they can reproduce even a portion of last year’s offensive success, they should be primed for another winning season.