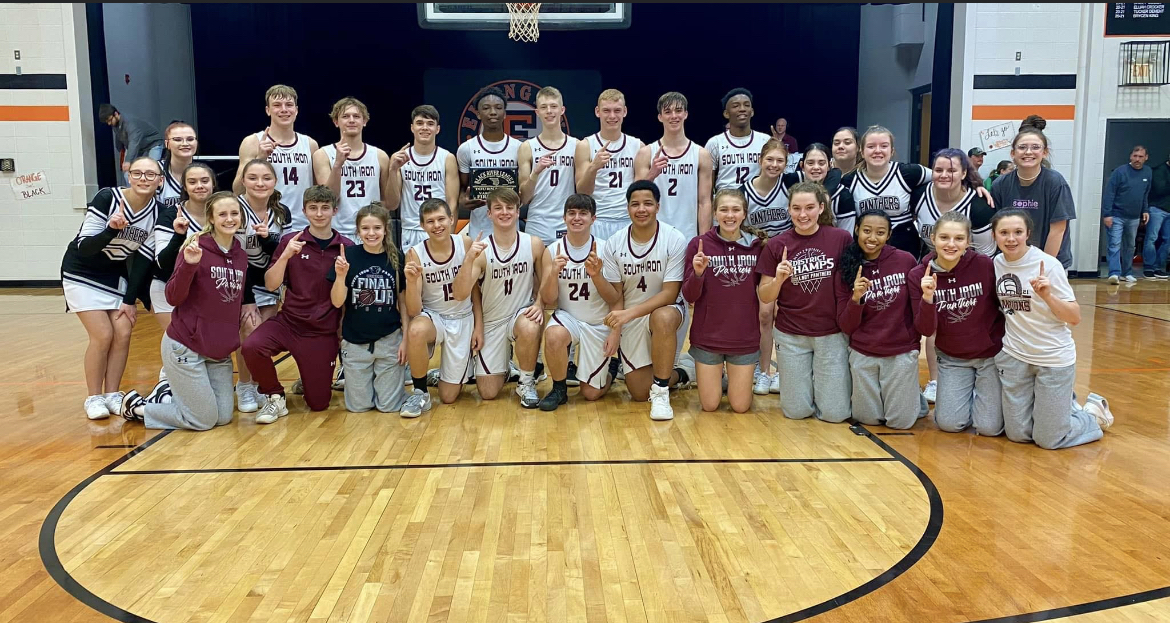 The Lady Panthers of South Iron have now won 14 straight games, as they knock off East Carter and Ellington to claim the BRL Tournament Championship.

To call the South Iron Girls Varsity Basketball team “teflon” is likely not doing them justice. These Lady Panthers are seemingly unstoppable, impenetrable, unbeatable (insert any superlative here), and they are making tsunami-sized waves this season. Now 16-1, they knocked off East Carter and Ellington to win the annual Black River League Tournament, and have won an incredible 14 in a row.

They were the top seed in the Tournament, so they had the luxury of a first round bye. That set them up to play East Carter in the Semifinals, and East Carter was more or less a sitting suck. The Panthers controlled the pace of the game and time of possession in the first half, but they had trouble getting their shots to drop. Thankfully the defense was on point in this one.

They only managed a dozen points in the first quarter, with Madison Ayers and Anna Parker combining for all 12, but the stout D held the Redbirds to just six. It was more of the same in the second, with the Panthers racking up another dozen and keeping East Carter at bay with eight. That gave them a comfortable 24-14 lead at the half and set up what would be a breakout third quarter.

The shots finally started to drop after the break and South Iron exploded for 29 points in the third quarter. They limited the Redbirds to just nine and took a 30-point lead into the final eight minutes of play. In the last frame East Carter managed 15 points to the Panthers’ 13, but the ladies from Annapolis were just chewing up the clock to preserve their huge lead. When it was all said and done they had themselves a 66-38 victory and a trip to the Finals.

The outside shooting game was off in this one, as the Panthers limped to a 2-0f-21 shot performance from downtown, but they still managed to have four players in double digits. Ayers, Parker, Enzley Dinkins and Allecia Cornell all accomplished that feat. But the real story was the defense, which forced 29 turnovers to really change the landscape of the game.

So the stage was set for the Championship game with South Iron facing off against the Ellington Whippets, and the first half of this one was a tight affair. Inaccuracy from the floor plagued both teams once again, and after the first eight minutes, the Panthers were clinging to a razor-thin 10-9 lead. Parker made her mark in the game early though with eight of her team’s 10 points in the quarter.

The second frame was just as tight, with both teams finding a little more consistency on offense, but they just traded buckets back and forth. Dinkins stepped up with eight points to lead the Panthers to a 16-15 edge in the frame, but their lead heading into the break was just two.

After halftime though, the Panthers once again found their form in the third quarter. They put up 16 once again, but the defense went full bore and held the Whippets to just four. That opened up a huge lead and a chance to seal the deal in the final eight minutes. Parker loomed large in the frame, hitting a pair of threes and totaling eight points.

South Iron went lead foot in the fourth and floored it, pouring in 17 and blanketing the Ellington offense once again. They outscored their opponent 33-9 in the second half, and took down the Championship in convincing style with a 59-33 victory. Adding another piece of hardware to an already bulging trophy case.

Parker led all scorers with 22 points and made two of the three 3-pointers in the game. Cornell had the other and was good for 13 points, while Dinkins had 16 to round out the top scorers. Defense was paramount once again as the 23 turnovers the Panthers forced led to several easy transition buckets and helped them pull away in the second half.

All in all it was a pretty convincing sweep of the tournament for the top seed.

They will get back at it on Tuesday when they travel to Arcadia Valley to try and make it 15 wins in a row.