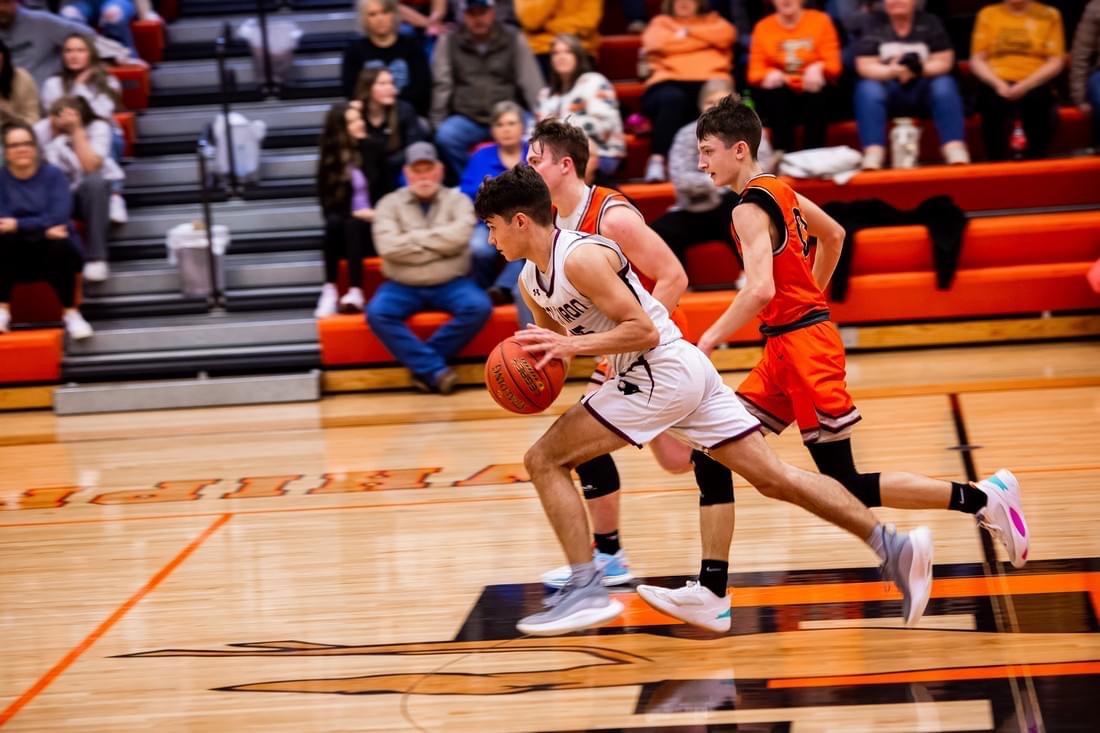 The top-seeded South Iron Panthers breeze through the Semis against Ellington and then gut out a tight win over Bunker to claim the Black River League Championship.

Coming off a tough loss to a stacked Greenville team last week, the South Iron Panthers rebounded in a big way, claiming the Black River League Tournament Championship over the weekend. The Boys Varsity squad rolled over Ellington in the Semifinals before gutting out a hard-fought victory over rival Bunker in the Finals. The pair of wins upped their record to 17-2 on the season.

With the luxury of being the first overall seed in the tourney, the Panthers earned themselves a first round bye and an immediate entry into the Semifinals. That pitted them against the Ellington Whippets, and this one started out as lopsided as a poorly hung painting.

The Panthers went up 13-2 in the first quarter, and the Whippets just didn’t have an answer for the South Iron (defensive) Curtain. The next frame would be a little closer, but the Panthers still held the advantage 16-9 and took a healthy 29-11 lead into the break when the halftime buzzer sounded.

Ellington must have had quite the locker room speech though, because they came out guns-a-blazing in the third quarter. They had the Panthers on their heels and outscored them 23-15 to make it a much tighter game. It was 44-34 going into the final quarter, so the Panthers had to bear down. They did just that, erupting for 23 points in the fourth, their highest scoring output of the day. The Whippets came up with 14, but it was hardly what they needed to stay alive in this one.

The Panthers had themselves a 67-48 victory and punched their ticket to the BRL Finals. Sawyer Huff made the biggest impact in this one with 19 points, helped by his 3-of-4 performance from downtown. Jermarquis Burse had a big game as well with 17 points and three steals, while Hunter Huff and Jermartez Burse shared the team lead with seven rebounds.

That win sent the Panthers into the finals to take on an always tough Bunker squad. The Eagles are 12-3 this season and as potent as ever, so this would be a challenge from the jump. It also didn’t help that South Iron was dealing with an illness throughout the week that affected the team, but they rallied and persevered to fight this one to the finish.

It was gridlock in the first quarter, with both teams struggling to produce consistent offense, but the barely Eagles came out on top 13-12 after eight minutes of play. The second quarter was not quite as close, with Bunker putting up 14 and holding South Iron to a mere five. That would put the Panthers behind the eight ball, trailing 27-17 going into the half. It was their lowest scoring half of the season.

Halftime speeches from Head Coach Dusty Dinkins have been known to have an effect in the past though, and this one must have had some mustard on it, because the Panthers came out with purpose in the third. They scored 15 and held the Eagles to just 10 to cut their deficit in half. Down just five in the fourth quarter, never having led in the game, they stormed the basket and protected their own with a 17-6 showing.

Clutch free-throw shooting was key at the end, as the team went 14-of-18 collectively from the line, and South Iron was able to hold on for the 49-43 victory and the Tournament Championship.

Coach Dinkins commented on the game saying, “We battled through some sickness this week and did an outstanding job of competing and finding ways to overcome adversity. We never led until very late in the game. Very proud of our effort and ability to defend and rebound which helped us have the opportunity to comeback and win.”

Sawyer Huff was the team leader in points with 15, but right behind him was Gabe Ruble with 14. He made four of his eye-popping 12 attempts from downtown and also led the team with a pair of steals. Tez Burse once again shined around the glass, leading the Panthers with eight boards. He had eight points as well and was sniffing a double-double.

This was a clutch performance from a team dealing with some adversity and coming off a tough loss. It shows that the Panthers are indeed human, but a very resilient and dangerous group of humans. They will look ride this momentous wave into Fredericktown on Tuesday when the take on the Blackcats.