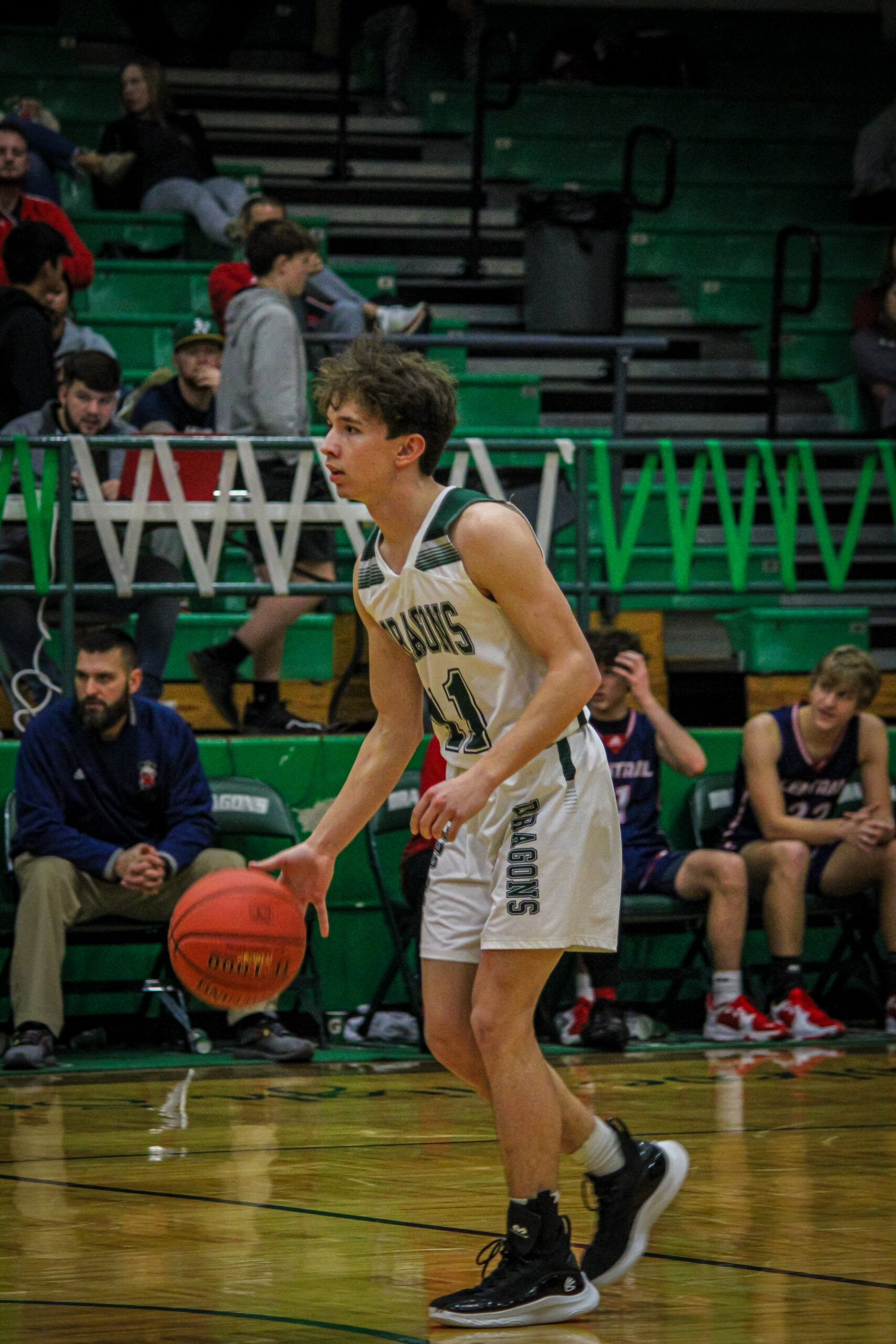 After a scorching hot five-game winning streak, the Dragons cooled off during their second game of the week, a loss to the Kelly Hawks.

Nearing the end of the regular season, Ste. Genevieve was in action twice last week, going 1-1 in games against Herculaneum and Kelly High School. Recently, the Dragons had been playing excellent basketball and were looking to add to their four-game winning streak. The team did just that in their first game against Herculaneum, but that streak was snapped with a loss to Kelly.

In the first game of the week, on Monday, February 14th, Ste. Gen hosted the Herculaneum Black Cats on Senior Night, in what ended up being a comeback victory. To start it off, the Dragons barely edged ahead of their opponents 14-13 after the first quarter. However, Ste. Gen played excellent defense in the second, holding the Cats to only four, giving them a comfortable eight-point lead, 25-17, going into the break.

Herculaneum must have been given a rousing halftime speech as they came out in the third and unloaded 20 points while keeping Ste. Gen to 11. With the Dragons now down by one with only eight minutes left, the winning streak was in jeopardy. Wanting badly to win on Senior Night, the Dragons began breathing fire and absolutely torched the twine, scoring 27 points, putting them well ahead of the Cats 18, to take the victory by the score of 63-55.

Proving to themselves that they could step up when the game was on the line, Ste. Gen fought hard for this win. Recognizing this, Head Coach Rob Coleman commented, “It wasn’t our best defensive game we’ve had, but give a lot of credit to Herculaneum. They are a good team with some good offensive weapons. I was very proud of our guys and happy for them to get a win on their Senior Night.”

The three key offensive weapons were all in sync against Herculaneum. Aiden Boyer led the way with 16 points, while Rudy Flieg and Ricky Hunter were not far behind with 15 and 14 respectively. Boyer also dominated the boards, pulling down 15 rebounds, with Flieg adding seven more, to secure the win.

Next, Ste. Gen traveled to Benton to challenge the Kelly Hawks on Thursday, February 17th. Not helping matters, starting point guard Nick Plati didn’t play at all because of illness. The Dragons opened up as usual, getting a lead 13-7 after one quarter. They kept the heat on in the second, adding 14 more while holding the Hawks to another seven, to enter the intermission up by a large margin, 27-14.

It must have been a rough bus ride though, as Ste. Gen just seemed to run out of gas. Kelly came back in the third, scoring 13 to cut the lead down to 10. Despite being down double-digits, the Hawks kept pecking away in the fourth. Unnecessary fouls cost the Dragons, as Kelly got hot from the free-throw line and ended up scoring 22 in the final eight minutes to defeat Ste. Gen 49-46.

Coach Coleman was a bit dismayed by the result, and said, “We struggled on the offensive end. We had a good lead at the beginning of the third quarter but didn’t play well down the stretch. Flieg got in some foul trouble, but give Kelly some credit. They hit a lot of free throws to pull out the win.”

This one wasn’t pretty statistically speaking. Flieg did what he could, still managing to post 12 points and grab five rebounds, and Boyer was the next highest scorer with seven, also contributing nine rebounds. The Dragons only shot 50 percent from the free throw line, which ended up costing them the game.

Ste. Gen only has one regular season game remaining to get back into the win column before districts. The Dragons will look to finish on a high note as they will square off against Perryville on Thursday, February 25th. This could be a big finale for the 18-6 Dragons, who will certainly be the favorites against the 2-21 Pirates.