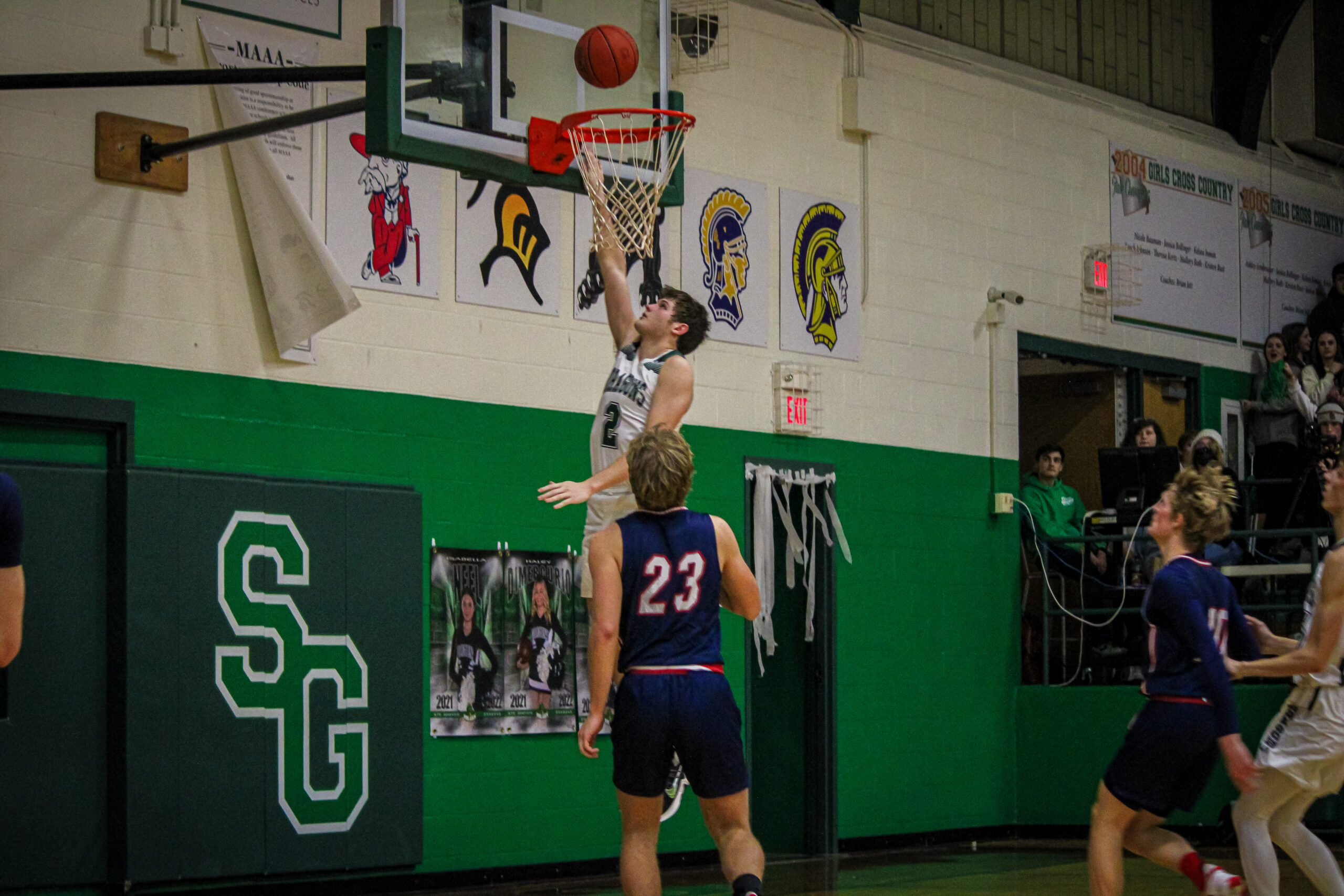 It was a big week for the Ste. Genevieve Boys Varsity Basketball team as they competed in the MAAA Conference Tournament, hosted by Mineral Area College. The Dragons played three tough games, but were victorious in each, earning them the Conference Championship. The team managed to bring home the first place plaque after defeating Potosi, Park Hills Central and North County.

In the first game of the tournament on Tuesday, February 8th, Ste. Gen took on the Potosi Trojans, a team the Dragons had just barely beaten only a week prior. Similarly, it was a close game until the second half when the Dragons pulled away, earning them the opening round victory. Ste. Gen finished strong and ended up winning by 12 points, 63-51.

Head Coach Rob Coleman spoke to the tightness of the first half and the eventual win, saying, “We struggled with offense early, but our guys kept attacking and played pretty good defense the entire game. The big thing in the first half that hurt us was their fast breaks, and we didn’t do a very good job of getting back. Obviously hitting free throws were big for us the entire game. I was proud of our guys and how they handled the situation.”

It was a stand-out performance from Aiden Boyer that allowed the Dragons to advance. Boyer led the way in scoring and rebounds with 20 and 13 respectively, but was followed closely in points by Ricky Hunter who added 18 more. Blake Morganthaler also contributed an additional 10 points to help carry the Dragons past the Trojans, and into the semifinals.

With the win, Ste. Gen was next matched up against Park Hills Central, another team with whom they had recently battled. In the previous meeting, the Rebels got the better of the Dragons and defeated them 49-39. This time, the Dragons were more prepared for the Rebel’s fast-paced offensive style.

This semifinal game, which took place on Friday, February 11th, was a fight all the way to the finish line. In fact, the Dragons were trailing by four points at the end of the third quarter, and had to come from behind to get the victory. It was looking dire in that final quarter. Coach Coleman quipped, “At one point in the fourth, we were down seven but made some big plays and hit our free throws to pull out the win.” In the fourth, Ste. Gen turned up the heat on offense and exploded for 17 points, while holding Central to 10, earning them the victory by three, 64-61.

It was Hunter, this time, who did the most damage on the scoreboard as he racked up 23 points. Boyer was also key down the stretch as he posted 14 more, as well as nine rebounds. Rudy Flieg helped his team out by scoring 13, but more impressively, he grabbed 10 rebounds for the double-double to help boost the Dragons past the Rebels and into the tournament finals.

The finale of the tournament took place on Saturday, February 12th, and pitted Ste. Gen against the always dangerous North County Raiders. This would be these teams’ second meeting this season, with the Dragons beating the Raiders by only four points just a few weeks back, and another intense game was set to take place in the finals.

This game came down to the wire. Central had a small two-point edge, 31-29, at the halfway mark. However, Ste. Gen was able to unload an additional 20 points in the third, while holding their foes to only 10. With a seven-point lead going into the final quarter, the Dragons stayed strong, focused on their defense and managed to hold onto the victory 61-59.

The Dragons certainly showed grit as they fought for each point. Coach Coleman noted, “We led almost the whole game, but it was close the entire time. Again our guys held their composure, even when things weren’t going our way. They believed in each other, stayed positive and got the job done. Our defense kept us in all the games, and free throws allowed us to pull it out down the stretch.”

Once again, it was Hunter who played some incredible basketball, shouldering most of the work as he put up 25 points. Morganthaler was the next leading scorer with 12, followed by Flieg with 10, who also dominated the boards by snatching 12 rebounds.

Pumped up by the results, Coleman stated, “The boys played awesome all week. They executed our game plans and believed in each other.  This is the first MAAA Conference Tournament Championship we have won. I am very proud of their hard work and how they have prepared for these games.” With these three wins, the Dragons improved their season record to 15-6.

Now the Dragons must keep the momentum rolling as there are still two regular season games remaining before districts. The team will travel to Kelly for a game this Thursday, and then finish the season next week on February 24th with another away game at Perryville. Good luck Ste. Gen!