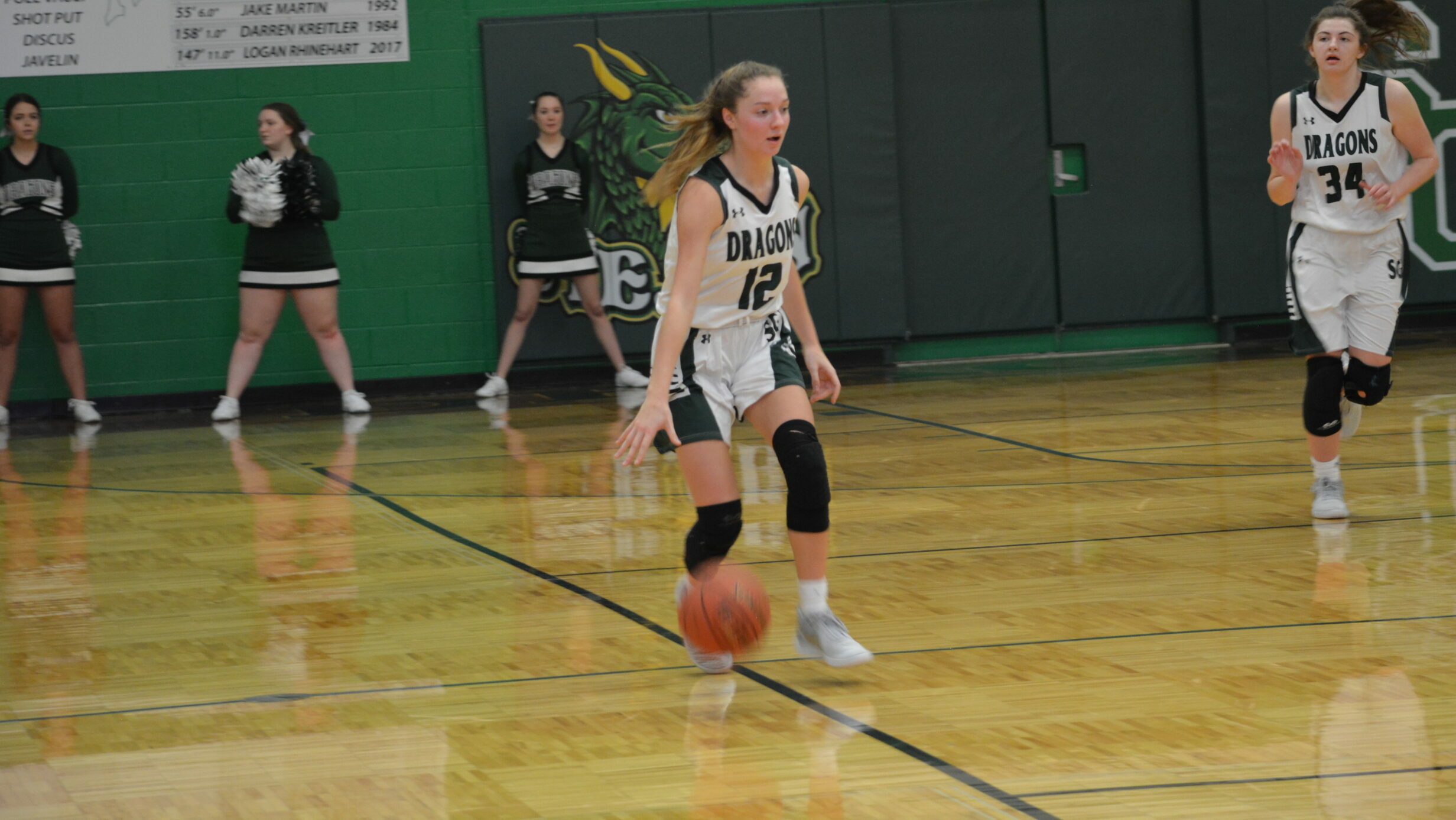 The Lady Dragons faced their toughest test yet in an 8-1 Cape Norte Dame Squad, but the Dragons were flying in on a five game win streak.

The Ste. Genevieve girls’ basketball team picked up a big win this week, taking down Notre Dame 49-43. Notre Dame came into the matchup 8-1 on the season, but oddly enough their sole loss was at home. The Lady Dragons have been on a tear since the new year and they weren’t letting Notre Dame ruin their hot streak.

Notre Dame started out hot, out scoring Ste. Genevieve 16-12 to open the game. But, Megan Aubuchon didn’t let the Dragons fall to far behind dropping 10 of the 12 first quarter points, keeping them in the game. Ste. Genevieve’s defense would turn the course of the game in the second quarter. They held Notre Dame to just three points in the eight minute span and would take a dominating 27-19 lead heading into the break. Marysa Flieg led the Dragons offense in the second quarter with five points, nailing a big shot from beyond the arc and another bucket from the field. Maci Reynolds followed up with another three ball from deep and Sydney Bumgardaner hitting a couple big shots from the field, both added four points in the quarter.

Ste. Genevieve’s offense hit a snag in the third quarter; Notre Dame’s high pressure defense held the Dragons to just six points. But, Ste. Genevieve’s defense did much the same as Notre Dame. The Dragons were able to hold the Bulldogs to under 10 points and kept a 33-28 lead heading into the final eight minutes of play.

Both teams’ offenses came out firing in the fourth, but Sydney Bumgardaner was the Dragons saving grace. She sank seven free-throws at the end of the game to help Ste. Genevieve take the 49-43 win. For Ste. Gen, it really was charity stripe as they went 11-14 from the foul line.

Coach Jordanna Walk commented on Bumgardaner’s performance down the stretch. “Gotta make free throws late to seal the deal and she did that. Coach Walk followed up on the key factor in the win, saying,”Staying composed and don’t press the panic button playing against their pressure defense. The girls did a great job handling it and had no fear.”

Megan Aubuchon led the way for the Dragons with 15 points while Bumgardner added in 13 points and Marysa Flieg followed suit with 11 points.

“I think it was a team effort and we all worked together really well,” said Abby Moore. “We are an older team and have been playing basketball for a long time, so composure has just came with a lot of experience and time on the court.”

“I think overall we did good both offensively and defensively. With such a close game we just kept playing and trusted each other,” said Megan Aubuchon.

When asked if this was the team’s biggest win of the season, Coach Walk’s response?

“Yes, the girls really wanted that one and worked hard for it.  Huge team effort and win!”

The Lady Dragons extend their win streak to six games and move to 10-4 on the season. They travel to Fredericktown next on the 21st, with tip-off at 7pm.