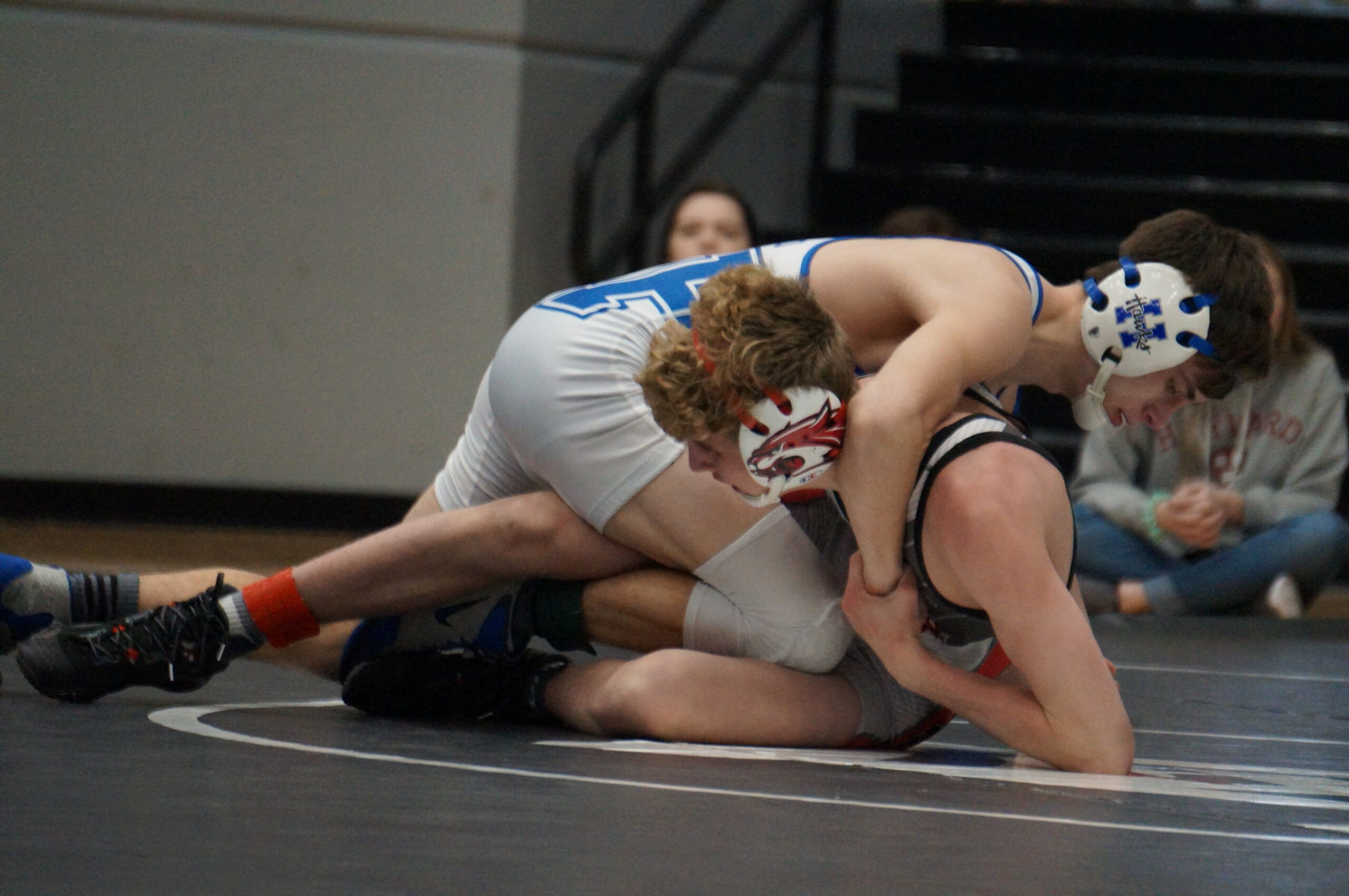 With nine medalists, the humble Hawks earn a third place finish in the Smithville Tournament. Hillsboro Boys Varsity standouts Gavin Alexander and Dalton Litzsinger both bring home gold medals with spectacular performances… but there is still work to do.

The Hillsboro Hawks Boys Wrestling team competed in the Smithville Varsity Wrestling Tournament last Saturday, December 19, scored 152 team points and came away with a third place trophy. This would be an excellent finish for most schools, but the expectations at Hillsboro are much higher. Head Coach Matt Mitchell commented, “We learned a lot about ourselves and we can build off of the weekend results. Right now, we just have to continue to get better each day in the practice room.”

The Hawks, who are determined to be the best team in the state, know that they have a lot of work to do.

The team finished with nine wrestlers in the top three. Mitchell was pleased, and said, “Overall I think we wrestled well. We talked about how placing in the top three here is similar to the new Sectional Tournament. If you take top three there, then you go to state. We made that a goal for each athlete. We knew that this would be the toughest tournament of our regular season, and we would be going against a lot of wrestlers that we will see in the State Tournament.”

The results were solid for Hillsboro, but they now realize that in order to be the best, they have to continually beat the best. The expectation at Hillsboro is to be on the top of the podium.

Wrestling at the 106 lb. weight class was Aidan Black, who went 1-4 on the day, with his win coming by way of pin.

Gavin Alexander wrestled at 113 and won the division, defeating five opponents while pinning two. Mitchell was impressed, and noted, “Alexander really got back to some of the things he does well. He had a great day.”

Sam Richardson placed third at 126 with a 2-3 record, with his two wins coming by pin. Richardson wants more, and said, “I will work harder than ever in the practice room.”

At 132, Evan Morris also placed third, with a 2-2 record. Mitchell noted, “Morris actually got a couple of key wins. He avenged a loss from the State Tournament last year. Any time you get to avenge one of those losses, it’s a good thing. He was excited, but I know that he wanted to wrestle better in that match. He will get back to work.”

Dalton Litzsinger had a tremendous tournament winning the 138 lb. weight class, going 4-0 against some stiff competition and pinning two opponents, including a pin in the gold medal match. “Litzsinger put together quality matches against tough opponents. He looked really strong from the top position. He also had a great day,” Mitchell said.

Rather than focus on individual efforts, Litzsinger and the Hawks look at how the individual can benefit the team. He said, “We look at these trips as a business trip. Therefore, everyone wrestling is there to go out and score points for the team. We have looked pretty good so far this season, but we have plenty of things mentally and physically that we can work on to be in the running for a state title.”

At 145, Raymund Barnett placed fourth, with a 2-3 record, pinning one opponent.

Griffin Ray placed third with his 4-1 record, pinning three opponents. Mitchell explained, “Ray had a good showing. He got caught in a weird position in his semi-final match and lost. I know he was better than his opponent. I hope we get another shot against him at the State Tournament. Ray was upset with himself, but he will learn and grow from that mistake; I know he will.”

Ray was in fact disappointed, but vowed to redeem himself, and said, “I got caught by a decent wrestler, but that will never happen again. I’m on a mission now.”

At 160, Eddie Hines also took third. Hines was 3-2 on the day, with three pins. Said Mitchell, “Hines had a pretty solid tournament. He was winning his semi-final match, but lost really late. I know he wants that one back. For his first Varsity tournament he wrestled well. He just needs more matches to get his stamina up.”

Hines noted, “I’m just going to continue to keep putting in work, and prove to everyone that my name matters. No matter how great I become, I’m going to remain humble.”

Next, John Bennett wrestled at 170, going 2-3, with a pin. Then at 182, Nicholas Green placed third with a 2-2 record, which included two pins. Mitchell noted, “Green had some quality matches. He had a solid day and did some good things.”

Green then said, “When I wrestle I am determined to take care of business for the team. We all did very good. I’m just focusing on getting better and better as the season goes on.”

Hunter Rhodes and Jordan Jarvis both lost in the finals. Rhodes took home a silver medal at 220, going 3-1, with three pins. At 285, Jordan Jarvis also earned a silver medal, going 3-1 with one pin. Mitchell was complimentary of the efforts from his big men, and said, “They wrestled really well. They have both been showing a lot of improvements week-to-week. They have been working hard in the practice room and it showed today.”

Rhodes is determined, and said, “I’m going to keep putting in the work, making everyone around me better, and will remain humble no matter what I do.”

The Head Coach was content with the result, but knows that there is work to do to improve. “We are in a good spot. We will continue to make adjustments in different positions. We did have a few kids that I thought could compete better with their competition. We will continue to work on that. When the post-season comes we have to be ready to compete in every match no matter what, and I’m not sure we are all there yet,” said Mitchell.

The Hawks will be in action this week. On Monday, December 21, the Girls Varsity team travels to North County, while the Junior Varsity team will be wrestling in the Cape Central JV tournament. On Wednesday, December 23, the entire Hillsboro wrestling program will be competing in quad duals at Liberty-Wentzville with Lindbergh and Timberland.

With a team first mentality, the humble Hawks will get to work, and save the celebrations for the State Tournament.