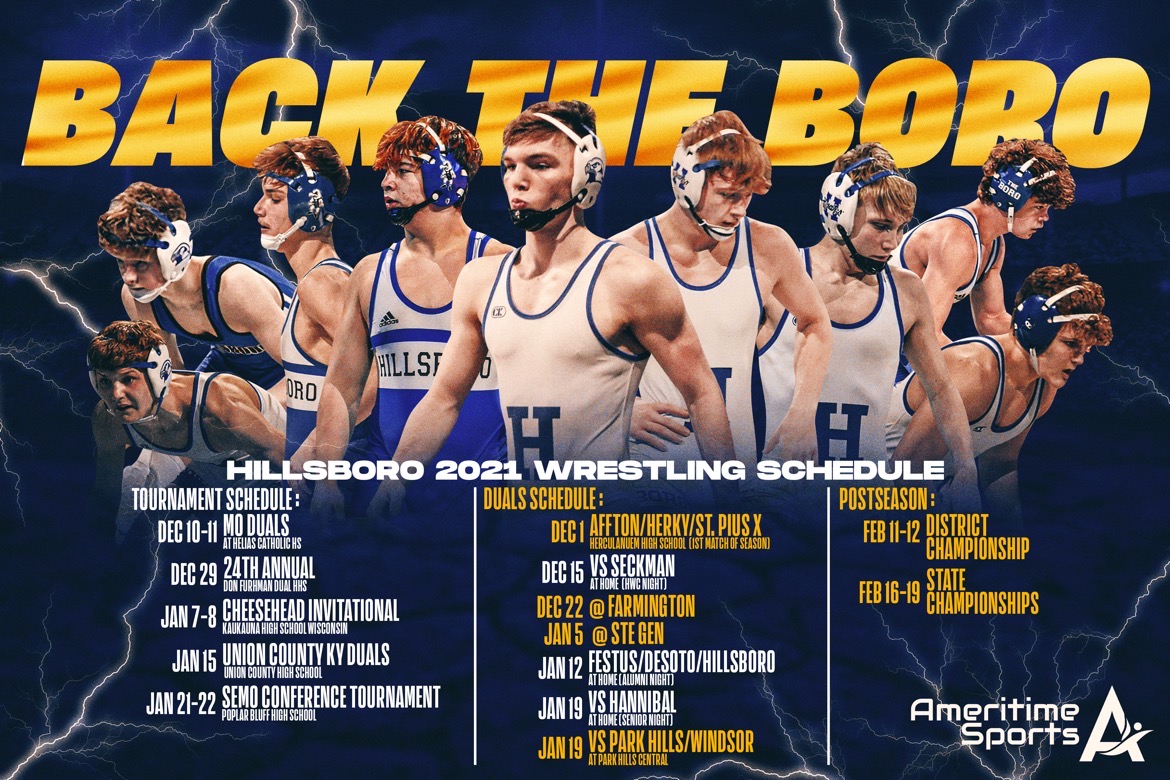 Last season the Hillsboro Hawks Wrestling program tasted some success, finishing 3rd in the State Tournament, but this season they’re coming for the top spot.

It’s almost December and that means high school wrestling is ready to begin! The Hillsboro Wrestling Program is coming off a stellar 20-21 season, and are looking to do even better this year.

Last season, Hillsboro made an incredible run, culminating in an impressive third place finish in the Class 3 Missouri State Tournament. The Hawks dominated their district as well, finishing in first place in the Class 3 District 1 Tournament.

The Hillsboro Wrestling Program is always strong, but this season could be better than ever due to the fact that the Hawks only graduated two starters: Aidan Haggard and Zach McNees. While their presence will be missed, the returning starters are a force to be reckoned with. Aidan Black, Gavin Alexander, Dalton Litzsinger, Griffin Ray, Sam Richardson, Evan Morris, Eddie Hines, Nate Barnett, Hunter Rhodes and Nick Green all started for the team last season, but this year, they’re even hungrier.

In a recent interview, Ameritime Sports asked Head Coach Matt Mitchell his thoughts on the upcoming season. Here are his responses:

Who do you see as being your top and key athletes this season?

“I’m really excited to watch Litzsinger being that it’s his Senior year. He has been in the program a long time, since his youth wrestling days in fact. It should be fun to watch him finish out his career at Hillsboro. All of our returning guys are motivated to do better than last year. They have had a great off-season and I’m looking forward to watching them compete on a high level.”

What are your expectations for the team this season?

“Our expectations go up every year. This team has high goals. It will all come down to how much they commit and come together as a team in the practice room. We know that when they work hard and push each other good things happen on match day.”

What are the strengths of this team, and what aspects do you think will be a work in progress?

“Their willingness to push each other in the practice room is their biggest strength. They are always looking to get better. A lot of this team has been to the State Tournament and at least had a taste of what that is like. They have some good experience, but will need to build off of that.”

What do you think of your schedule this year? What will be some of the challenges?

“I really like our schedule. After a crazy schedule last year, partly to do with COVID, we get to return to some tournaments we missed out on last season. Of note, we got into a nationally ranked tournament in Kaukauna, WI called the Cheesehead Invitational. We are really looking forward to that challenge for our team. The kids are excited about making the trip and competing on a national level.”

Mitchell continued, “I’m excited to watch Rhodes this season. He suffered a torn ACL at the Missouri State Tournament last year and was unable to get on the podium. I’m excited to watch his return. We also have a solid Freshman group that is looking to compete for spots on our Varsity roster, including Jordan Penick, CJ Bauer, Gabe Barnett, Kaden Larkin, Jackson Tucker and Aidan Petit.

One thing is for sure, Hillsboro will be prepared for whatever challenges lay ahead. These athletes wrestle hard and leave everything on the mat every time. With that mindset, only good things can happen for these Hawks who are always looking to soar.