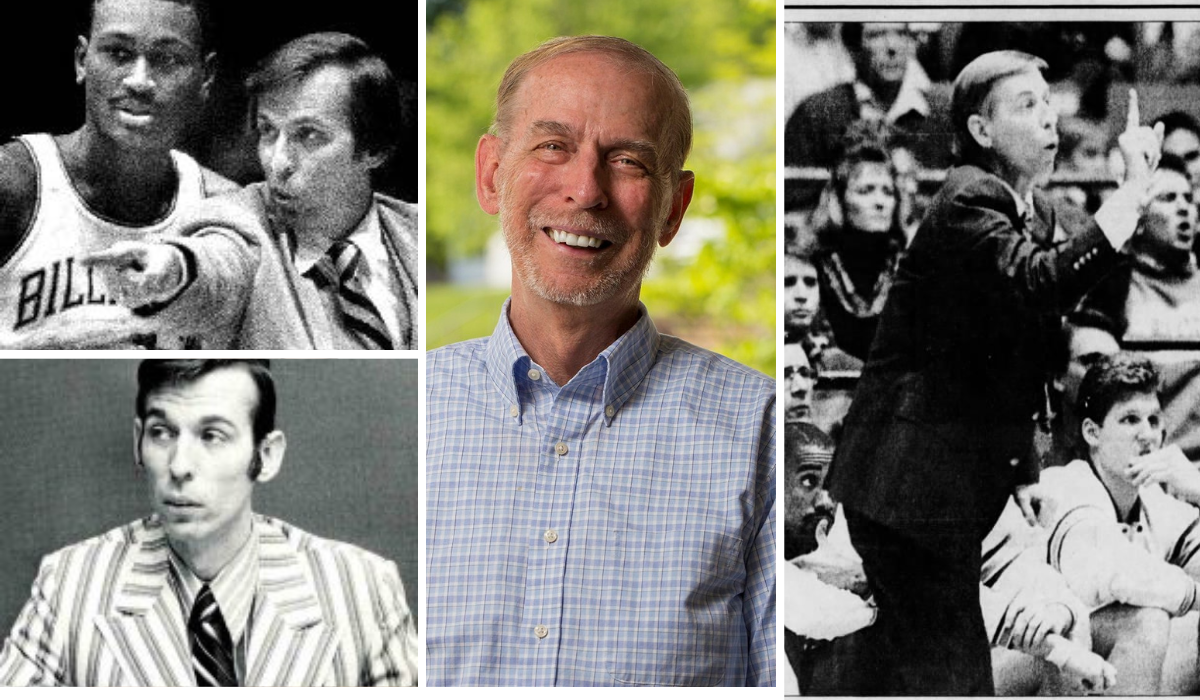 Many often wonder…where are they now?

Well, Ameritime Sports, Resource One® and all associated companies within Ameritime’s Integrated Financial Network® are pleased to provide that information to our readers with a series of verbal portraits featuring some of the most iconic local sports names in the area. The inaugural installment kicks off with renowned basketball coach Rich Grawer. Despite being a basketball legend, he is a teacher, first and foremost, and finds himself drifting back to that again and again.

Richard Grawer, 79, is most notably the famed basketball coach of DeSmet Jesuit High School and Saint Louis University, but there is much more to the man than a clipboard, an occupationally-hoarse voice and sweat on the hardwood.

Having played baseball and basketball himself in college at Rockhurst University, Grawer was first offered a position as a baseball coach rather than as a basketball coach when he began teaching history at DeSmet in Saint Louis in 1971.

“Coaching is teaching, really,” Grawer said. “I had more accomplishments in baseball than basketball, but […] I felt as a coach I could have more influence on the athletes and on the game in basketball. I felt that I could teach the kids more, so that’s why I gravitated more to basketball than to baseball after I got out of college.”

Grawer proved himself correct, leading DeSmet to three Missouri State Basketball Titles in the 1970s and setting a record for consecutive wins among large schools in Missouri with 63 over a two-year period.

So, when offered a position as an assistant coach at the University of Missouri under Norm Stewart, Grawer “decided to take that plunge.”

“It was a tough decision,” Grawer said. “I had to talk it over with my wife because we were going to take a pay cut, but she [also] knew that I wanted to test myself and see if I could succeed at the college level like I did at the high school level.”

After a year of serving as an assistant coach, Grawer returned to the Gateway City to become the new head coach at Saint Louis University, inheriting a basketball program with no winning seasons since 1964-1965.

“When I got the job at SLU they were almost willing to disband the program,” Grawer said. “The biggest thing is that I kept [the program] alive. Without the success that we had, you know, they would have dropped the program.”

Grawer overcame the immense pressures “by sticking to [his] guns” and ingraining both technical skills and a strong sense of morals into his athletes.

“I was a perfectionist and a disciplinarian,” Grawer said. “I was very precise on passing, cutting, dribbling, doing it the right way, [but] I also felt that [my players’] actions off the court were very important. I thought that they had to be gentlemen in all respects, [and] if they missed practice or if they missed class or if they did something wrong, I would punish them the only way that I knew how: and that was to take away playing time.”

Grawer would finish his career at SLU with 159 wins (the second-most wins in the history of SLU basketball), but would be let go in 1992 after suffering the first losing season since 1984-1985 after 10 years with the Billikens, having never led them to the NCAA tournament.

Upon reminiscing on his time at SLU, Grawer recalled “a time when [he] had this really tough decision” before the end of the season Conference Tournament in 1988.

“Right before we were to play in that tournament, one of my star players at practice went up behind one of my other players and knocked him in the back and punched him,” Grawer said. “My rules basically say that if you do something detrimental to your teammate, you’re suspended from the team. I realized that if I suspended this guy from the team, we were not going to win that tournament and get to the NCAA [tournament]. If I [didn’t] suspend him from the team, I violated one of my principles. What would you do?”

By suspending his player from the team, Grawer may have lost his shot at the NCAA tournament, but he maintained the importance of never straying from one’s values.

Despite missing out on the NCAA, Grawer’s achievements have not gone unrecognized. Grawer was most recently inducted into the Missouri sports hall of fame in 2014, but as he humbly puts, has also been inducted into “five or six others.”

“You have to be yourself. You can’t try to be somebody you’re not,” Grawer said. “I’m proud of the fact that I lasted 10 years at the collegiate level at a place that was very hard to coach at; we didn’t have a lot of money, we didn’t have good facilities. I was also proud of the fact that I think about 90% of all of my players graduated, [and that] we doubled, tripled, and quadrupled the attendance in the stands. I remember all that stuff more so than the victories.”

With his sports days more or less behind him, Grawer has transitioned to a new form of teaching: as a Medicare and Social Security strategist for Infinite Educational Strategies® (IES®), a non-profit organization, which serves to simplify financial complexities to assist clients in gaining greater control of their wealth.

“I’m a resource on Social Security and Medicare to help a person develop a comprehensive financial plan for the rest of their life,” said Grawer. “What I try to do is give them what I call comprehensive and objective; those are the two keywords. I don’t sell anything, I don’t try to tell them what to do, but I try to lay out all of the options so they can make a decision that’s best for them.”

Grawer often reflects on his experiences and how they have prepared him for the uniquely-curated job that he currently holds.

“It’s all the same principle: what I’m doing now with Social Security and Medicare, I teach people,” Grawer said. “I can still teach, which I enjoy doing. I’ve done that my whole life, whether it [be] in the classroom or on the basketball floor or baseball field. That’s teaching. I think that it’s been the perfect carry-over for what I’m doing now.”

Grawer credits his teaching successes to his wife, Theresa, a teacher in her own right and “the most important influence on [his] life.” Working for IES, Grawer can set his availability on an interactive calendar that clients can access to schedule meetings on dates and times that work best for him, giving him more time to do things with the people that he loves.

“[What I am doing now], it allows me to spend some more time with my family, immediate family, my wife, my grandkids,” Grawer said. “I enjoy life and I enjoy doing all this with teaching and being with my family. Life for me now is good.”

To learn more about Coach Grawer’s amazing journey and what he can do to help you or your loved ones in his area of expertise, contact him at IESeducates.com.

Or feel free to peruse any of the other helpful sites regarding the services we provide at:

Sports is an incredible journey, but life doesn’t end there. Reach out to those who know.