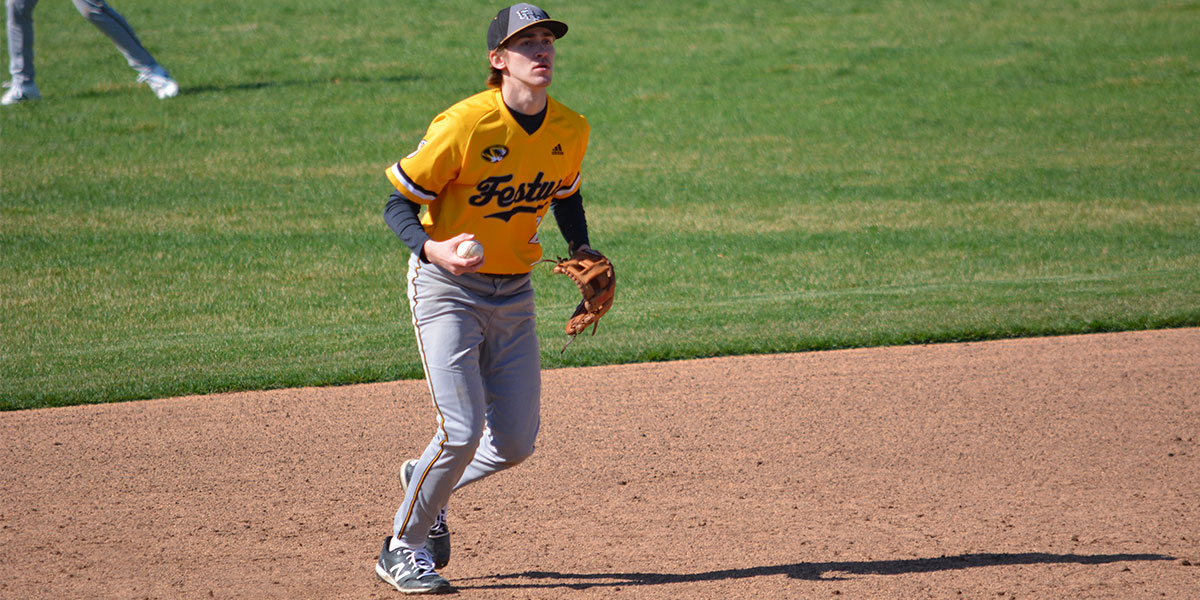 The Festus Tigers’ Varsity Baseball team loses two games to the Windsor Owls and sinks their record to 6-8. Next, the Tigers take on Ste. Genevieve on Monday, April 19th.

The Festus Tigers’ Varsity Baseball Team lost two games to the Windsor Owls on Monday and Tuesday. The Tigers had won their previous five meetings with the Owls before these two losses.

The first of the two games against the Owls didn’t go Festus’ way. It was a low-scoring affair and the Windsor pitchers had their way with the Tigers.

Festus did jump and score the first run of the game in the top of the third inning. Hayden Bates was hit by a pitch to start the inning and he advanced to second on a fielder’s choice. He then got over to third base off of an error and scored when Tyler Bizzle smacked a sacrifice fly to right field.

Windsor did some damage in the bottom of the fourth though. Two singles and a walk loaded the bases for the Owls before Festus hit a Windsor batter that brought the game-tying run to the plate. Shortly after, the Owls hit a two-RBI single that gave them a 3-1 lead. That was all of the offense either side could muster up. Windsor won 3-1.

“I honestly think we played pretty well,” Bizzle said. “Just next time we need to limit the strikeouts.”

Festus did not come up with a hit the entire game. Bizzle had the only RBI, and Bates was responsible for the run they scored. Baserunners were few and far between for the Tigers. They were outhit by Windsor 8-0.

Nate Moore started the game on the bump for Festus. He allowed three runs off five hits through four innings. He also struck out five. Kaleb Kennedy pitched two innings in relief. He allowed three hits and walked one batter.

The scoring picked up in the second game. Unfortunately, it was the Owls’ bats that came alive.

Windsor took an initial 1-0 lead in the top of the first before rallying to score three more in the third. The Owls led 4-0 after three frames.

Mistakes from the Tigers helped Windsor to another rally in the fifth. Festus walked six batters in the top of the fifth. Those walks mixed in with a few Windsor hits resulted in a five-run inning that gave the Owls a 9-0 lead.

The finishing blow came by way of a Windsor grand slam in the top of the seventh. The Owls finished off the Tigers 13-0 and sunk their record to 6-8.

Bates was the only Tiger to come up with a hit in the second game. He was 1-3. They struck out nine times as a team and were outhit 9-1.

“We all struggled to put the bat on the ball so that is something we need to work on,” Collin Reando said. “At times, we seemed scared to hit and we just need to focus on getting on base.”

Jackson Gross started the game on the mound and pitched two innings. He allowed one run off three hits and struck out two batters. Aidan Irelan was the first out of the bullpen in relief. He also threw two innings and allowed five runs. Connor Hulsey and Brendyn Zohner also made appearances on the bump. Hulsey allowed three runs and Zohner allowed four.

The Tigers only came up with one hit over both of these outings. These are two games Festus will put in the back of their minds and move forward with the season. They look to get their bats hot once again on Monday, April 19th against the Ste. Genevieve Dragons.