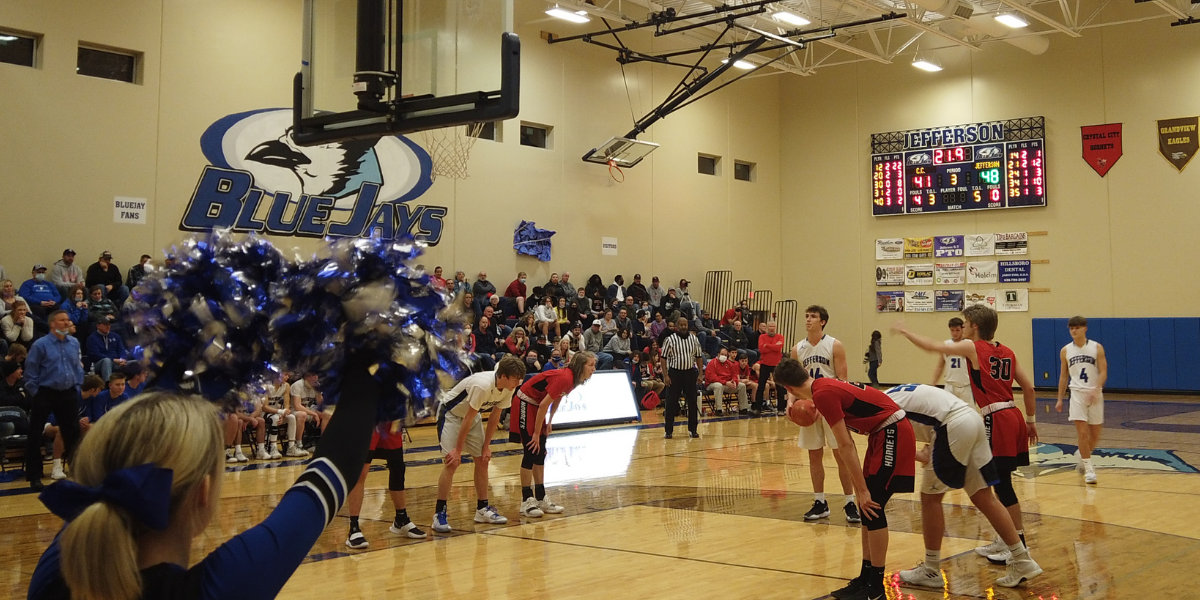 The Jefferson R-7 Blue Jays Boys Varsity Basketball team take down the Crystal City Hornets on Friday 63-58. The gusty victory boosted the Jays to an 11-9 record and showcased excellent performances from Colby Ott and Colton Richardson.

The Jefferson R-7 Blue Jays Boys Varsity Basketball team had their hands full on Friday night with the rival Crystal City Hornets. Thankfully for Jays’ fans, they came through with a hard-fought 63-58 victory.

The first quarter started out hot for Jefferson, thanks in large part to Colton Richardson. He led the way with ten points in the frame, hitting five-of-seven field goal attempts, and the Blue Jays found themselves with a 19-11 lead after eight minutes of play.

When asked about his red-hot teammate, Colby Ott smirked,  Richardson aka ‘Bronny Bucket’ had a great game, especially in the first half.”

The second quarter would produce the exact same results… but for opposite teams. The Hornets came away with 19 points in this one, while the Jays managed just 11. Before you do some quick math in your head, the score was tied 30-30 going into the half.

Well, the halftime speech must have been inspirational for the Blue Jays, because they came out on fire. And the Hornets apparently woke a sleeping giant in Ott. “Mr. Everything” went 3-3 from beyond the arc and led the way for Jefferson as they won the quarter 18-11, en route to a 48-41 lead.

The fourth quarter was dicey though, as Crystal City poured it on with 17 points, but the Jays were able to hold off the scoring barrage just enough. They managed 15 points of their own and held on for the 63-58 victory.

When asked about the win, Ott responded with, “I hit some shots late, but overall we played as a team and stayed focused. I think we could’ve won by more if we made a couple more shots under the basket. That is something we need to work on. But it’s always fun to play against a crosstown rival like Crystal. I have a lot of respect for those guys.”

There is likely mutual respect from Crystal City. Certainly for Richardson, who led the team with 19 points and 11 boards. Ott wasn’t far behind though with 17 of his own, plus five rebounds, three assists and four steals. Daylen Whitener was the other true standout with 10 points, eight boards, two assists and two steals.

He had this to say about the team’s performance, “We moved the ball really well… finding the open guy. And I thought we did good job of rebounding as a team.”

The now 11-9 Jays will look to continue that style of play, and try for their third straight win as they take on the Festus Tigers on Tuesday, February 9th. Tip off will be on Festus’ home court, and starts at 7pm.