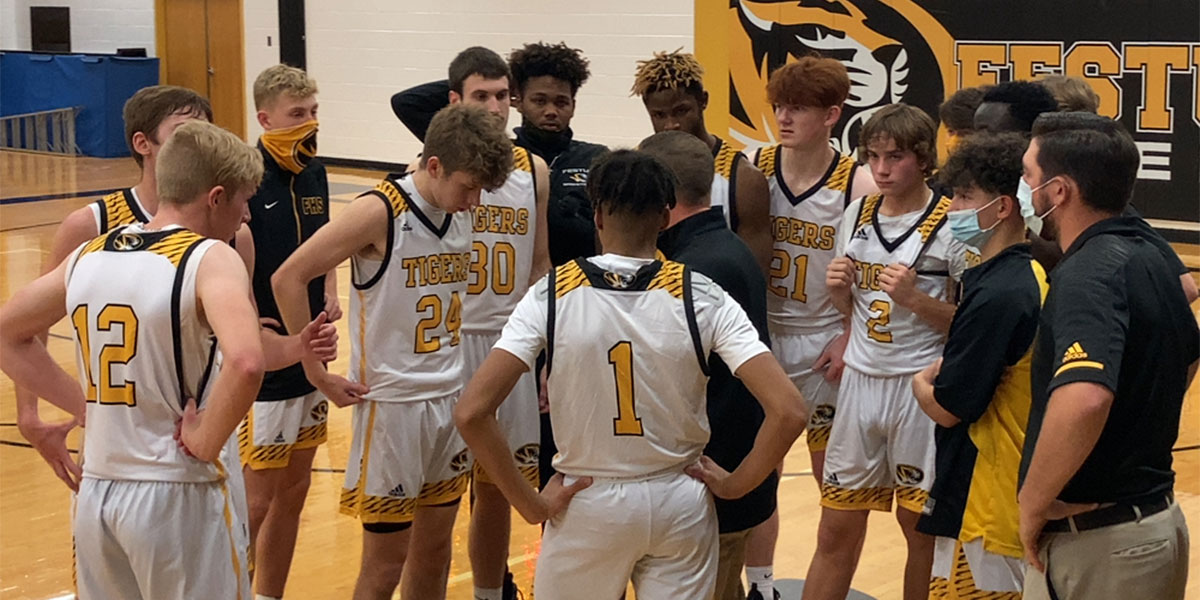 Festus Cruises Past Ste. Genevieve to Advance in the Park Hills Christmas Tournament

The Festus Tigers avenged their loss to South Iron with a big win over the Ste. Genevieve Dragons. Festus has won seven in a row against the Dragons dating back to 2016.

The Festus Tigers bounced back from their loss to South Iron with a 75-62 win over the Ste. Genevieve Dragons in the Park Hills Christmas tournament. This was Festus’ seventh straight win over the Dragons dating back to 2014.

Festus broke the game open in the second. Arhmad Branch went 6-8 from the free-throw line in the quarter and scored eight points. Cole Rickermann got into a rhythm and scored seven points. Collin Reando had two baskets and hit a free-throw to add five points to his total. The Tigers exploded for 26 points in the quarter and only allowed nine to the Dragons. Festus led 45-19 at the half.

“In the first half, we brought some great defensive energy that allowed us to take a big lead,” Reando said. “We also shared the ball very well and took smart shots.”

Ste. Gen came out of the half determined to cut into Festus’ lead as we saw Branch hit a three and added five more points to his total in the third. JD McDowell had two baskets in the quarter as well. The Dragons outscored the Tigers 19-15 but still trailed by 22 going into the final eight minutes. Ste. Gen had another solid showing in the fourth quarter but it was not enough to overcome Festus’ strong first half. The Tigers secured a 75-62 victory and bumped their record to 7-3.

“We played a great first half,” Head Coach Jason Therrell said. “We didn’t play our best in the second half but held on for a nice win versus a good team. Our effort in the tournament has been really good and we hope that continues. It all starts with our defense.”

This was a strong performance for the Tigers especially coming off of a loss.

“I think we were able to bring energy out of the gate after playing a tough game yesterday,” Rickermann said. “I feel like as a team we are having a really good tournament all around. We have played well in all of our games and are really showing we are not an eight seed.”

Rickermann followed up his 18 point performance against South Iron with 19 points against the Dragons. Branch was just behind with 16. Westhoff was the only other Tiger in double-figures with 13 points. The dynamic Collin duo, Reando and Weinhaus, had eight points each. McDowell had seven and Desmond Davis and Logan Cash each had a basket as well.

Festus is pleased with its performance in the Christmas tournament thus far.

“We had a big win in the first round against Fredericktown, ” Reando said. “In the second game, we played great offense and defense against a great team but fell just short. Against Ste. Gen we did many positive things. We have been very consistent throughout the tourney, which is nice to see.”

The Tigers sit at 7-3 and have won six of their last seven games. This team is starting to sink into the rhythm of the season and look to keep the success going into the new year. Next, Festus will take on Desoto in their final game of the Park Hills Christmas tournament.

Festus Cruises Past Ste. Genevieve to Advance in the Park Hills Christmas Tournament