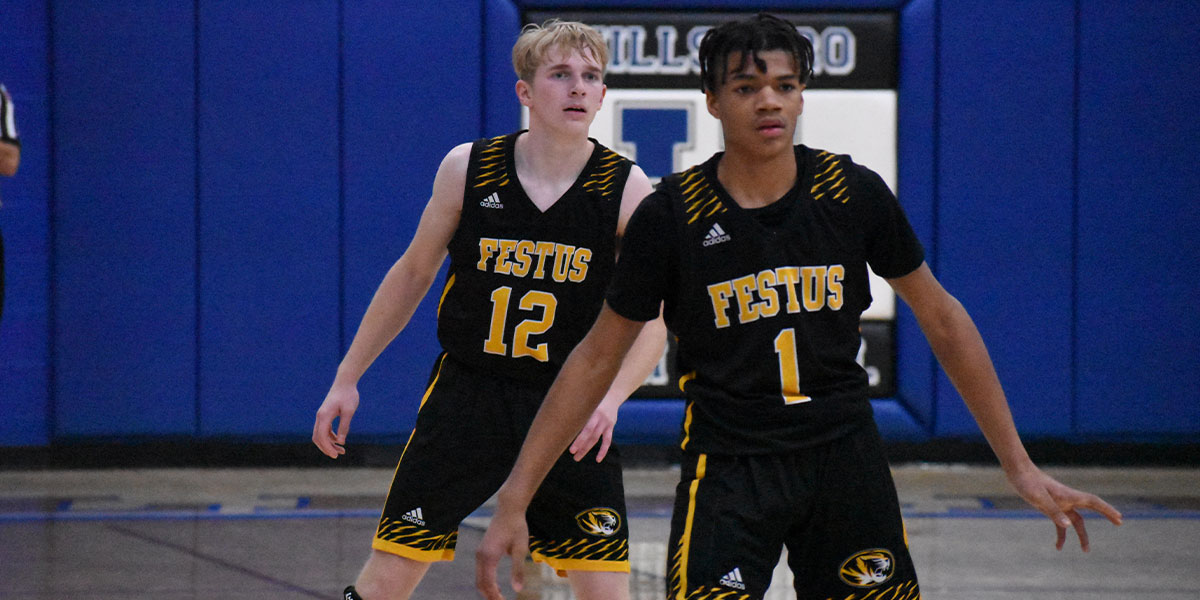 Festus Keeps Their Conference Record Perfect with Win over Perryville

The Festus Tigers picked up their fifth win of the season against the Perryville Pirates on Friday. Festus has now beaten Perryville three consecutive times dating back to 2019.

The Festus Tigers boys’ varsity team rolled past the Perryville Pirates 75 to 51 on Friday. Festus won the last three matchups against Perryville dating back to the beginning of 2019.

Festus came out determined to make their mark early. Collin Reando led the way in the first quarter with five early points. Kaian Roberts Day stepped up in the absence of Desmond Davis who is currently quarantined. Day scored four points early, and Festus led 19 to 8 after one quarter.

The Tigers continued the attack in the second. Cole Rickermann scored a few baskets in the quarter, and Logan Cash went two for two from the free-throw line for his first-ever varsity points. The Pirates had a better second quarter but still trailed 33 to 20 at the half.

Festus kept their foot on the gas in the second half. Arhmad Branch came out on fire and scored nine points in the third quarter. Connor Westhoff scored six in the quarter as well. The Tigers had a comfortable 55 to 36 lead at the start of the final quarter.

The fourth was yet another high-scoring quarter for Festus. Collin Weinhaus hit two threes for his first points of the night. Cash added to his night with a basket and two more free throws. Branch capped off his night with five fourth-quarter points as well. Festus secured a 75 to 51 victory for its fifth win of the season.

“We had 8 different players score 6 points or more and 12 players record stats in the game,” Head Coach Jason Therrell said. “We could have had better shot selection at times, but overall we played hard and got a nice road win. I would like to point out Collin Reando who continues to be a team leader and our best rebounder. Kaian Roberts Day also had great contributions in this game.”

Branch scored 16 points to lead all Tigers. Westhoff was just behind with 13. Reando scored ten, Rickermann had nine, Cash had eight, Day and Weinhaus both had six. JD McDowell scored seven and is shooting over 70 percent on the season.

Festus is 5 and 2 on the season and is 2 and 0 in conference play. Most teams would be satisfied with a 24 point win. The Tigers are not satisfied.

“We played pretty well, I think there is another level that we can play at,”  Weinhaus said. “But I’m overall happy with our performance.”

Reando also felt the Tigers’ effort was far from perfect.

“I thought we played well at certain times throughout the game,” He said. “We came out in the second half and did a few good things but also struggled with some minor stuff. Definitely can’t complain about a 25 point conference win.”

Festus has some time to relax and reflect on the 5 and 2 start to its season. The Tigers will not play again until the Park Hills Christmas tournament. The tournament starts on Saturday, Dec. 26.

Festus Keeps Their Conference Record Perfect with Win over Perryville