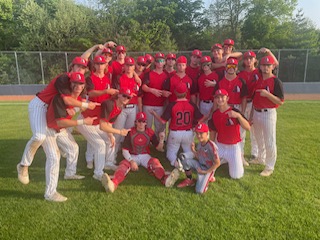 The Jackson Indians close out the regular season with a pair of dominant wins and look forward to Monday where they will square off with Poplar Bluff in the District Tournament.

The Jackson Indians finished out their regular season this week in grand fashion, as they blasted the Kelly Hawks and the Perryville Pirates with an impressive display of both offense and defense. The Tribe crushed the Hawks 18-1 before blowing out the Pirates 10-0 to end things on a high note heading into the much anticipated District playoffs.

The first game against the Hawks on Monday was an absolute bloodbath from the jump. The Indians plated three in the first inning, highlighted by a Caden Bogenpohl RBI single, before they released the hounds in the second. Jackson took advantage of some defensive miscues by Kelly and grinded out tough at-bats to break through with seven more runs for a quick 10-0 lead.

They kept things quiet on the defensive side, and then exploded for eight more runs in the top of the fourth. The Hawks managed a solitary run in the bottom of the inning, but it wasn’t near enough as the rarely-seen 15-run mercy rule kicked in after the 4th and the Indians had themselves a whopper of an 18-1 victory.

Bogenpohl was the big hitter in this one with a 2-for-3 day that included a game-high three RBI. Henley Parker and Jack Wyatt were the other Indians with multiple hits, while Steven Schneider was the only other hitter with multiple RBI. On the mound it was… guess who? Bogenpohl again. He went the distance and allowed just one run on two hits and a walk while striking out six to earn the victory.

Then in the final game of the regular season the Indians kept the line moving and continued their trend of piling on early. They dropped a five-burger on the Pirates in the first and followed it up with three more in the second, which featured a four-bag blast from Bogenpohl, who is having himself a week.

They tacked on two more in the third to crack double digits and then held on defensively to once again trigger the mercy rule. This time it was of the ten-run variety, but like history tends to repeat itself, the game was halted before five full innings had been played due to the 10-0 score. It was a fitting way to end the regular season for a team that has truly dominated in 2022.

Bogenpohl was again the main masher at the dish with his 2-for-2 effort that included a homer, three runs, a walk and two RBI, but Quinton Borders and Tyler Malugen each had a pair of RBI as well. Clayton Ernst and Kyle Richardson drove in the other two runs in the game. On the bump, it was a bullpen start with four hurlers combining for the one-hit shutout. The Indian pitchers walked three and struck out nine in the effort.

The 2022 regular season for these Indians has been a blizzard of highlights, accolades and inspiring moments. They knocked off the 21st ranked team in the nation in CBC, got to play a game in Busch Stadium against the best team in Illinois and collected 20 regular season wins. Now with Districts kicking off next week, Jackson will try to parlay some of that historic success into momentum that will create a deep run in the district tournament.

Then comes State… and we’ll all be on the edge of our collective seat for that.

They will open the District Tournament on Monday, May 16th against the Poplar Bluff Mules. The two teams have split the season series, and the Indians will likely use the Mules to make a statement, because they don’t take a rare loss very lightly.

Good luck Indians and be sure to check out all the games on Ameritime Sports’ livestream page!