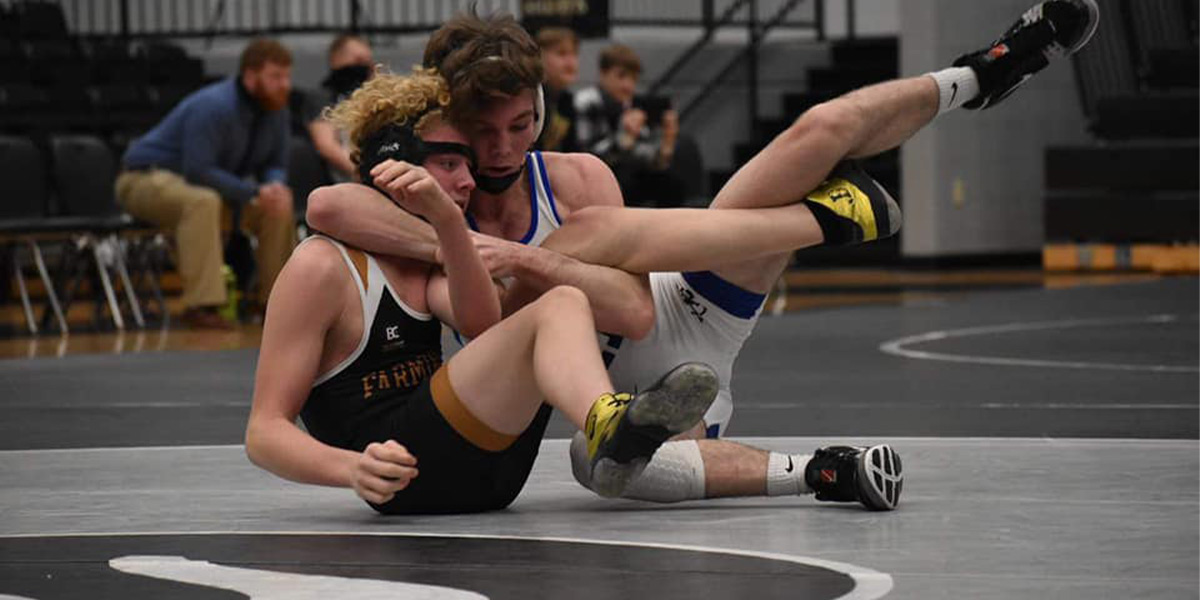 The Hillsboro Hawks Boys Varsity Wrestling team continues to show why they are among the best in the state, stomping four schools this week to keep them undefeated at 10-0. Junior standout Dalton Litzsinger achieved an impressive milestone at one of the meets, collecting his 100th victory.

The season has started hot for the Hillsboro Hawks. In their first 10 dual meets, the Boys Varsity Wrestling team has been untouchable, knocking off everyone in their path, including some key opponents. This week, the team defeated Windsor (Imperial), Central (Park Hills), Farmington and Whitfield.

On Wednesday December 9, the Hawks competed in a three-school meet, which included Windsor (Imperial) and Central (Park Hills). In their first conference win of the season, Hillsboro ran over Windsor (Imperial) first, winning by the score of 66-9. In that first dual, Hillsboro won eight of 10 matches, with four pins.

Aidan Black started the night off against Imperial, winning by major decision, 9-1, at the 106 lb. weight class. Head Coach Matt Mitchell commented, “Black did some good things tonight for his first ever high school match and I know he is looking to get back to work and get better in the practice room.”

McNees says he has no lack of motivation, “My family, my teammates and my past failures keep me working hard throughout the season.” Lastly, at 220, Hunter Rhodes earned a win after injury time ran out for his opponent who could not continue.

In the second dual, against Central (Park Hills), Hillsboro won 67-7, winning five of seven matches, three by way of pin. At 145, Barnett won a major decision 11-3. At 160, Ray won again by pin, at 3:31. Ray commented on how he is helping the underclassmen, “I’m just constantly reminding them why we are here, and I don’t let them get off track.”

At 195, McNees took only 25 seconds to pin his opponent. Rhodes, at 220, pinned his opponent in 1:58, and at 285, Jordan Jarvis won a decision 4-1. Mitchell commented on Jarvis’ performance, “He kept battling the whole time and stayed in good position. That has been something we have been working on in practice with him this week.”

On Thursday December 10, the Hawks had another three-school dual, this time against much stiffer competition. The Hawks won against Farmington 39-24 first, and then narrowly defeated Whitfield 37-33. Mitchell expressed his satisfaction, “I’m proud of our team tonight. We had some really tough matches. However, we could have wrestled better in more than a few matches. We lost a lot of decisions, but got bonus points from some unexpected kids.”

Against Farmington, the team won six of the 13 matches, five on pins. At 113, Gavin Alexander earned a pin at 57 seconds. At 120, Richardson pinned his opponent in 1:30. At 138, Litzsinger took merely 11 seconds to pin his competitor. It was his 100th win of his high school career. “Litzsinger is just becoming a great leader for us on and off the mat. To get 100 wins this early into his Junior year is pretty significant. We are really excited to see what he can do in the postseason,” said Mitchell.

At 160, Ray dispatched his opponent by pin at 18 seconds. At 170, John Bennett took only 21 seconds to earn the pin. Mitchell said, “That was a big win. It really helped the team. The kids were really happy for him.”

At 220, Rhodes won a decision 10-4. Rhodes, who has been tearing up the competition and is currently 10-0, said, “My teammates help me improve everyday, in the practice room and at the meets cheering me on. We really have something special here. We want to win it all and we are going to work for it.” Mitchell commented on how good Rhodes listens on the mat, “It allows us to make adjustments in the middle of the match, and Hunter has done a really good job with that.”

Whitfield was the most difficult match-up for the Hawks. Of the 10 matches, Hillsboro won three, with one coming by pin. At 113, Alexander won a major decision 8-0. At 145, Barnett won a decision 5-2. Mitchell was pleased with this result and said, “Barnett continues to have great matches. He is doing a lot of little things right. I’m proud of his effort so far this season.” At 160, Ray pinned his opponent at 2:23, making him an undefeated 10-0 on the season.

Mitchell was happy with his teams’ performance, but said, “We could have wrestled better across the board. I think the boys felt the same way. It’s tough wrestling back-to-back nights during the school week. It can be exhausting mentally and physically, but our kids handled it well.”

As the season continues to move forward, the Hawks will stay prepared by training hard on the mat, studying film of matches and supporting each other. Their next dual meet is scheduled for Wednesday December 16 at Seckman, where they will look to keep the train moving.