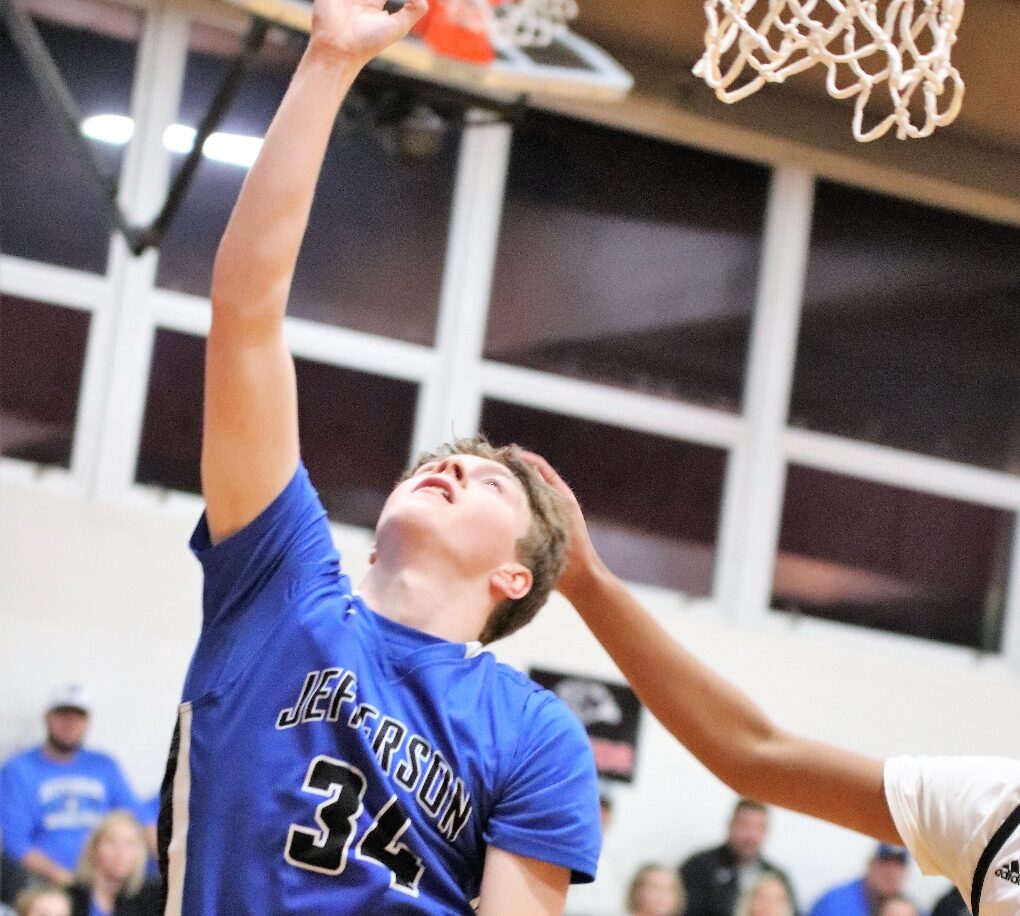 The Jefferson Blue Jays Boys Varsity Basketball team falls in their second game of the season, losing in the first round of the St. Vincent Round Robin to the St. Vincent Indians 58-32. Despite the loss, the Blue Jays get a boost from the returning football players on the team.

The Jefferson Blue Jays Boys Varsity Basketball team played their first game of the St. Vincent Round Robin on Monday, taking on the host St. Vincent Indians. The Blue Jays managed to keep the game close in the first half, but the Indians pulled away in the second half, eventually earning a 58-32 win.

The Blue Jays had reason to be excited entering their matchup Monday night as they had their entire Varsity team back for the first time this season. They gutted out their first game with just four varsity players active. On Monday with a full roster at their disposal, the Blue Jays had their sights set on taking down St. Vincent, a team that has won three consecutive matchups against Jefferson over the last two years.

It was a tightly contested first quarter between the two teams, with seven points from Colby Ott keeping Jefferson within one point, trailing 11-10. Jefferson’s defense began to crack in the second quarter however, allowing 16 points, but they kept it within striking distance down 27-19. Ott was on fire in the first half, contributing 13 of the Blue Jays 19 points, with the rest of the scoring coming off of three-pointers from Drew Breeze and Ethan Boyer.

The second half saw the Indians begin to pull away, scoring 20 points in the third quarter while holding the Blue Jays to just five. The fourth quarter was closer, but with the Blue Jays trailing by 22 entering the fourth, it didn’t make much difference, and Jefferson ultimately took a 58-32 loss.

Following the game, head coach Sean Breeze said that due to the team’s lack of practice, they have a lot to work on.

“It was the first day of basketball for eight of our 11 varsity players since the end of the football season,” Breeze said, “It was really just like playing a pick-up game with the lack of practices we’ve been able to have. The boys put out a good effort, but we clearly have a lot to work on.”

Senior guard Ott was one of the bright spots for Jefferson Monday night, leading the team in scoring with 15 points on 6-16 shooting from the field. Ott contributed in more ways than scoring, adding four rebounds, two assists and a steal.

Ott said that despite it being a tough night, there was plenty for Jefferson to build on moving forward.

It was also a standout game for Senior guard Boyer, who scored a career-high eight points on 2-4 shooting from three and 2-2 shooting from the free throw line. Boyer also added two rebounds, two steals and an assist to his box score.

Boyer was overall pleased with his team’s performance, considering the lack of preparation they had heading into the game.

“All around (we) didn’t do too badly considering we never got to practice,” Boyer said. “We struggled with rebounding and with making our shots, but got up and down the floor well and when I had the chance with the ball I did what I could to score.”

While Boyer and Ott both had solid evenings, some other Blue Jays struggled in their return to the hardwood. Drew Breeze and Colton Richardson combined to shoot 2-19 from the field and scored a combined five points. Despite struggling to score, both helped Jefferson elsewhere on the floor, with Richardson securing a team-high eight rebounds to go along with a steal and a block, while Breeze grabbed four rebounds and had a pair of steals.

The Blue Jays, now 0-2, will look for their first win on Wednesday when they face off against Valle Catholic (1-0) in the second round of the St. Vincent Round Robin.