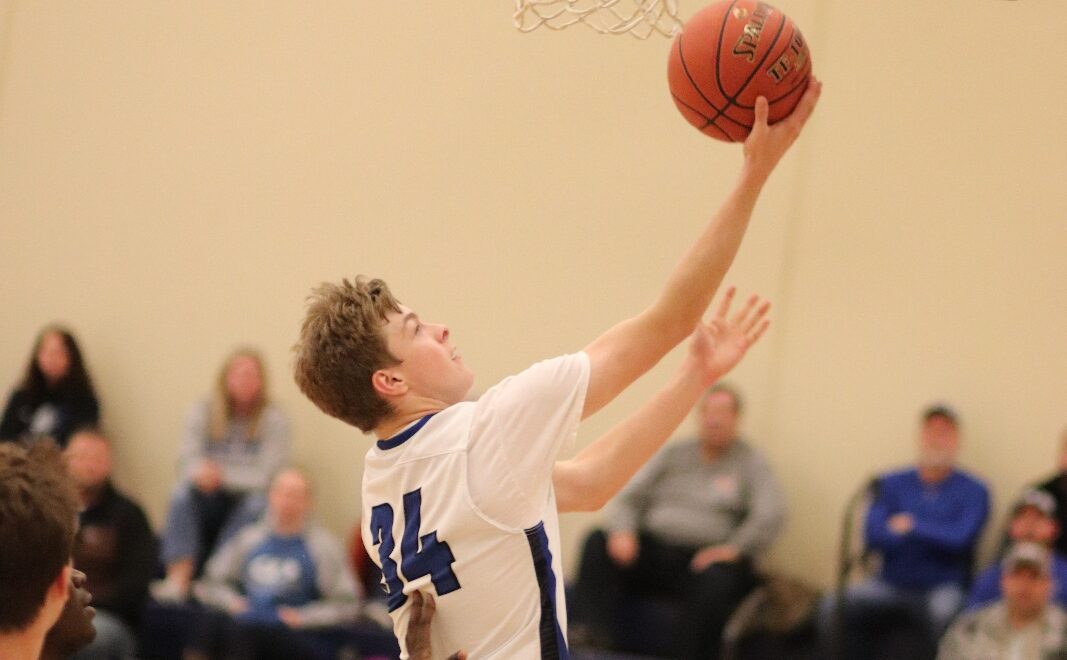 The Jefferson Blue Jays Boys Basketball team faces a tall order in their season opener, taking on the Hancock Tigers with just four varsity players available. Leading as late as the third quarter, Jefferson falls victim to a fourth-quarter comeback, and suffers a 56-36 defeat.

The Jefferson Blue Jays Boys Basketball team took to the road Tuesday to start its 2020-21 season against the Hancock Tigers. Despite missing most of their team, with many players still playing on the Jefferson football team, the Blue Jays performed admirably. They held the lead late in the game and trailed by only one point going into the fourth, but a late surge from the Tigers dealt Jefferson a 56-36 loss.

The Blue Jays entered Tuesday looking to improve on the success they had last season, where the team finished with a record of 14-12, losing in the semi-final round of the Class Three District Three tournament. Jefferson’s opening game was more difficult than expected, as only four varsity basketball players were available for the Tuesday night game as the remainder of the team were still playing football in the State Championship Semi-Finals. The Blue Jays’ opponent was no walk in the park either, as they faced a Hancock team that beat Jefferson 79-71 last season en route to a stellar 21-6 record.

Despite such an inexperienced squad, the Blue Jays opened the game looking like a team with years of varsity experience, leading 11-7 after the first quarter and entering the half leading the game 19-14. Sophomore C.J. Johnson, in his first varsity basketball game, came out firing, leading all Blue Jays in scoring in the first half with six points. Senior Masen Wilson also helped out in a significant way, with five big first-quarter points.

Some cracks began to show for the Blue Jays though at the start of the second half, as the Tigers’ offense came alive for 19 third-quarter points. A big third quarter from Senior Daylen Whitener, who drained eight points, kept Jefferson in the game, but left them trailing 33-32 entering the fourth quarter.

In the final quarter, things fell apart for Jefferson as the Tigers pulled away in dramatic fashion. Hancock scored 23 fourth-quarter points and held Jefferson to just four to give the Tigers a 56-36 victory.

With only four varsity players, and just Wilson and Whitener returning from last year’s team, Head Coach Sean Breeze was happy with his team’s performance Tuesday night despite the loss.

“We only had two returning Varsity players in uniform and only four Varsity players total,” Breeze said. “Considering the circumstances, the boys played a tough game, and I was very pleased with the effort of all involved.”

Seniors Whitener and Wilson led the Blue Jays in scoring Tuesday night, with Whitener leading the team with 13 points and Wilson adding on an additional 10. Whitener posted his 13 points on 5-13 shooting, while also leading the team in rebounds with seven. Wilson had a tough night shooting the ball, going 4-20 from the field and just 2-10 from three, but he contributed in a big way outside of scoring, putting up four rebounds, three assists, a steal and a block.

Jefferson managed to get some strong performances out of a pair of varsity debutants in Sophomores Johnson and Sam Stokes. Johnson finished the game with seven points, knocking down two threes and a free throw, while also providing a pair of rebounds. Stokes was outstanding for the Blue Jays on the glass, snagging six boards (two of which were on the offensive end) to go along with four points, an assist and a steal.

Now 0-1 on the year, the Blue Jays will have the chance to bounce back Monday night when they take on St. Vincent in the first round of the St. Vincent Round Robin Tournament. And thankfully help is one the way, as they should have a full roster by tipoff.