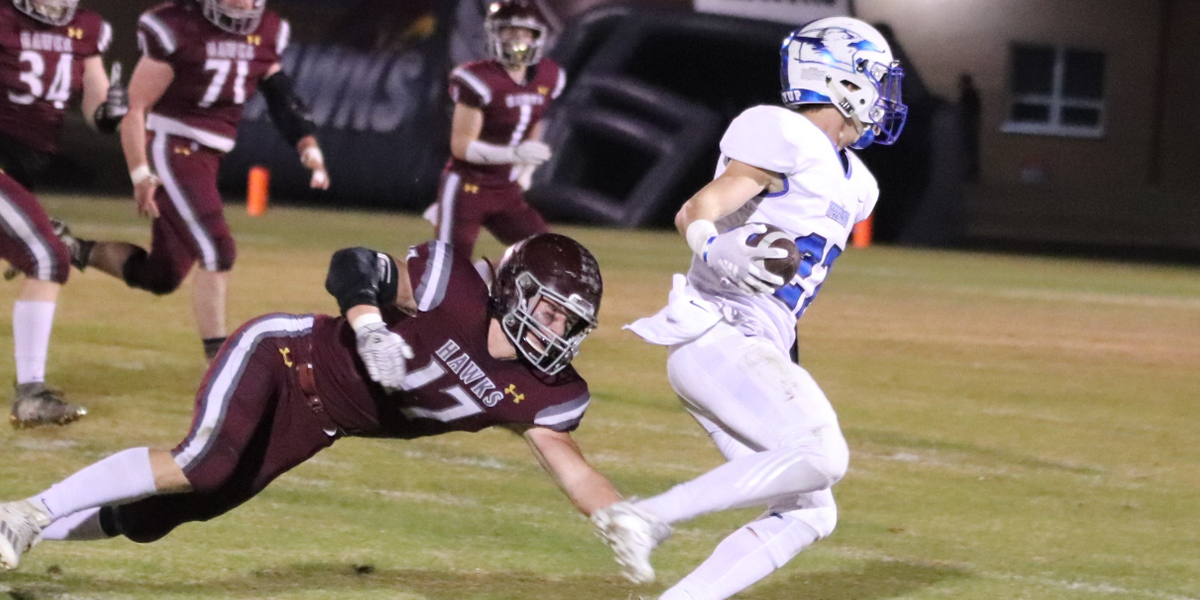 Jefferson Advances to District Finals with Win over Kelly

It was another terrific game for the Jefferson R7 Blue Jays on Friday, November 6 as they blew out the Kelly Hawks 40-7. The team faced a lot of adversity as they entered visitor territory, and had to hold off the Hawks attack in the first quarter, but came out victorious due to their resiliency. Head Coach Alex Rouggly was thrilled with his team’s ability to gel together, and said, “We came out and weathered a Kelly storm early, and continued to do what it takes to win playoff football games. Run the football, control the clock and play great team defense.”

Kelly put up the first points of the game towards the end of a brutal first quarter. With 1:48 left in the first, Kelly scored on a 34-yard touchdown pass to jump out to a 7-0 lead.

It wasn’t until 9:05 in the second quarter that Jefferson finally got on the board after a one-yard touchdown run by Dylan Schnitzler. Will Breeze added the extra point to tie the game, 7-7, and Jefferson remained in control for the rest of the half. Eight minutes later, D. Schnitzler again scored on another one-yard touchdown run with 1:18 left. This time the kick failed, but that gave the Blue Jays a 13-7 lead going into the break.

The team defense really shined in the second half, as the Blue Jays shut out the Hawks the rest of the way. Keeping the offense on the field allowed Will Schnitzler to carry the ball eight-yards for a touchdown run at 7:17 of the third quarter, and he then added the two-point conversion to open the score to 21-7. With 1:07 left in the third, W. Schnitzler took another hand off in for a touchdown from four-yards out. The extra point missed, but the score was now 27-7. Will Schnitzler noted that he couldn’t have done this alone, “Everyone did their jobs extremely well across the board which led to a big night for the backfield. However, none of that is possible without the big boys up front pushing the defensive line around all night.”

In the fourth quarter, Jefferson went back to D. Schnitzler who broke free from 55 yards out to score his team’s fifth touchdown. W. Breeze tacked on the extra point, which now gave them a 34-7 lead. Finally, with 1:28 left on the game clock, Colby Ott added the final touchdown coming off a one-yard run. The two-point conversion failed, but the game was essentially over with a final score of 40-7. Ott said of his team’s success, “That was a big win, we need to keep the momentum going into the biggest game of the season.”

Defensively the team was outstanding, tying the school record for team sacks with seven. Dawson Jakoubek led the night with ten tackles and two sacks. He said, “We executed our game plan perfectly. We had a big sack on a 3rd down that really changed the momentum.” Adding to the defensive success was Colton Richardson who managed six tackles and two sacks. Jackson Combs added five tackles and one sack. Robbie Hurley had five tackles. D. Schnitzler got involved defensively as well grabbing three tackles and one sack. Konnor Armstrong also had two tackles and a sack.

Rouggly was impressed with his team’s performance and noted, “This was a team win. I can’t stress that enough. We will enjoy this one for another 24 hours and then all eyes are on the New Madrid County Eagles for a district championship game. This team is playing great team football at the perfect time of the year!” Jefferson will host that upcoming game this Friday, November 13th at 7:00 P.M.

Jefferson Advances to District Finals with Win over Kelly