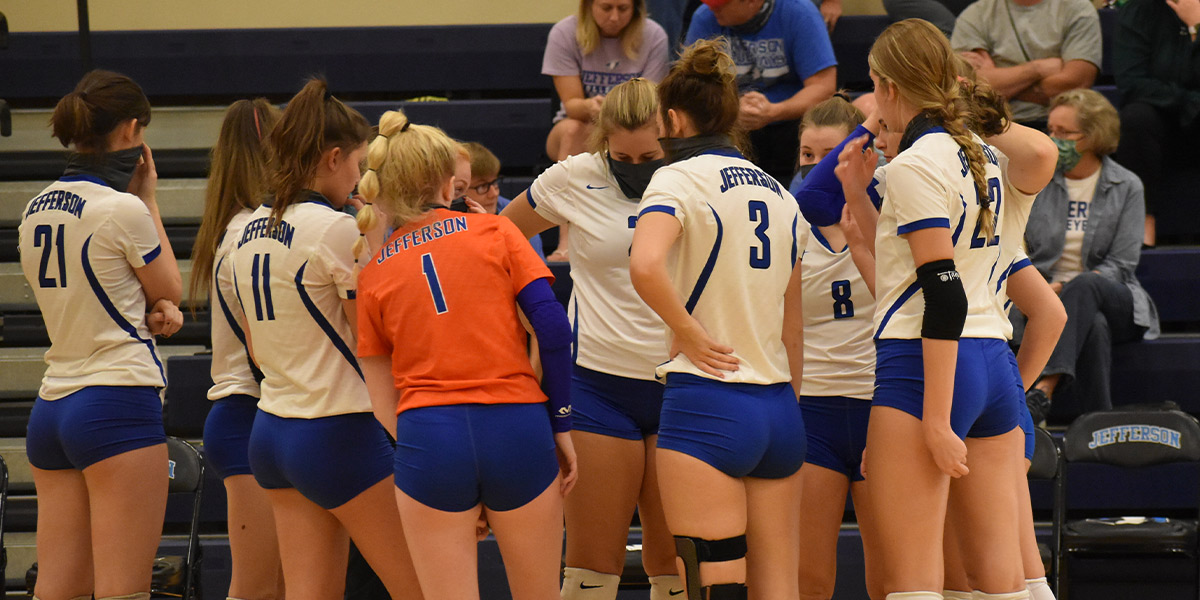 A tough finish to a successful season

The Blue Jays wish they were still playing, but unfortunately that’s not the case. On October 26th, Jefferson R7’s Varsity volleyball team competed in the final game of the season, as they lost their district match up to the West County Bulldogs in four sets. The team battled hard, but ultimately it was not enough to advance in the tournament. Head Coach Tara Fish commented, “Our defense just wasn’t where we needed it to be tonight in the back row.” The team wrapped up the season with a positive record of 12-6.

West County won set one 25-16 and set two 25-18. However, on the verge of defeat, the Blue Jays did manage to rally and take the third set from the Bulldogs 25-11. It wasn’t enough to get the job done, though, as West County narrowly won the fourth set 25-22, to send Jefferson home. Fish noted, “The team captains, Laney Smith, Payton Siebert, Mackenzie Rarick, and Ava Roth, did a great job this season in their own ways leading the team while continuing to grow themselves.”

Emma Breier was one of then positive points in the game, hammering 13 kills and connecting on two blocks. Brier said, “The thing that I focused on the most during that game was doing everything I can to help out my team. Whether it was getting touches on the blocks or getting a kill. Overall I think the season was pretty good. We just had a bad game at the wrong time.”

Another shining star of the game was team captain Roth who tallied nine kills, 24 digs and 21 serve receptions with only one error.

Paige Siebert was another game changer, especially from the service line, nailing 17 serving points, which included six aces. She also aided her team with 13 assists. Siebert said of her teammates, “This was an amazing team and I wish it could’ve ended better. For serving I was focused on helping my team win as many points as we could.”

Kirstyn Loyd, however, led the assists category with 14 and added two blocks. She commented on the game as well, “We definitely didn’t play our best game, but we will learn from the loss. We have to come out, have fun and focus on one game at a time and play like there’s no tomorrow.”

Also big on defense was Smith who managed a solo block as well as assisting on two others. Payton Siebert was also helpful in providing two more block assists.

Fish was pleased with her team’s accomplishments, and added, “We wish our Seniors, Laney, Payton and Mackenzie, the very best in the future and thank them for all of the years they have dedicated to our program. I look forward to seeing the returners work hard in the off season and be ready to come back seasoned and stronger.”

It was an impressive season for the Blue Jays, and we expect big things from them again next year.