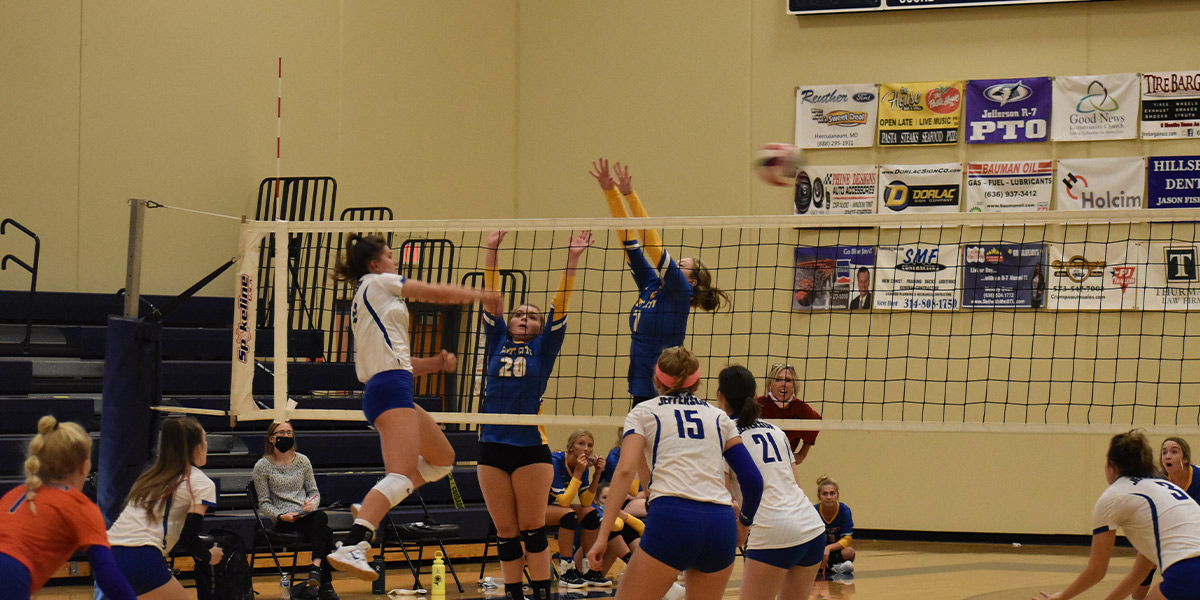 Jefferson bounces back from a tough loss on Tuesday night to take dominate 2-0 win over Scott City.

The Jefferson Blue Jays (8-5) suffered a tough loss the night previous and were looking to regain their form against the Scott City Rams (5-11-3). The Blue Jays took care of business against the Rams with a dominant 2-0 win.

The Blue Jays were hurting after a tough 3-0 loss to St. Pius X on Tuesday night, and the target for that win came Wednesday night against the Scott City Rams.

The Blue Jays put their foot on the gas early and never let up, winning the first set in convincing fashion 25-10. The second set was more of the same, as the Rams could never keep pace with the Blue Jays offensive attack, taking set two 25-9.

With the 2-0 win the Blue Jays move to 9-5 on the year, and with only four games left in the season, they have a great chance to end their season on a high note heading into the playoffs.

Sophomores Kirstyn Lloyd and Paige Siebert came up big for Jefferson. Lloyd led the team in assists with seven, while Siebert had three aces on twelve serving points.

Another sophomore, Ava Roth, also put in a big game for the Blue Jays. Her eight digs and two aces showcased her skillset, while also providing the team with energy throughout the game.

While head coach Tara Fish was pleased with the game overall, she was most pleased with getting a lot of her players time on the court.

“It is always a good night when everyone gets to see some court time,” Fish said.

The Blue Jays will play the first of their four remaining games Monday night when they head to Hillsboro high school to take on the Hawks.