The Tigers use a pair of late touchdowns to shock the Raiders with a 39-35 triumph.

The Festus Tigers kept their perfect season alive on Friday night after a thrilling come from behind victory against the North County Raiders. A big 4th quarter propelled the Tigers to a 6-0 record atop the conference and stung the crestfallen Raiders, who dropped to 4-3.

The game kicked off in style for Festus as Daylen Wagoner hauled in a 30-yard pass from quarterback Cole Rickermann, but North County quickly answered with a 96-yard kickoff return. But there was still a lot of game to go. When asked about his team’s effort Wagoner replied, “We make sure to never quit and keep fighting no matter the score or the people that are in.” 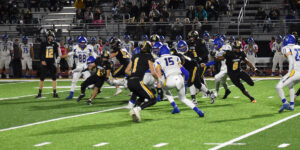 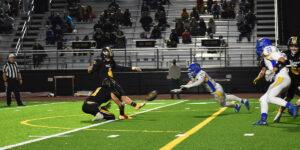 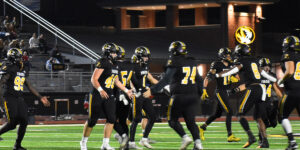 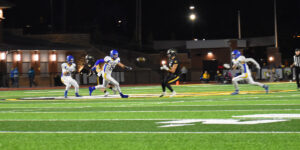 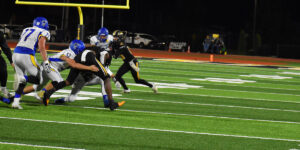 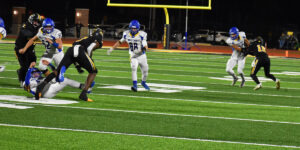 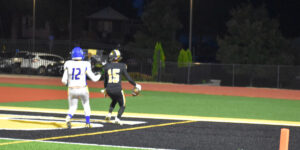 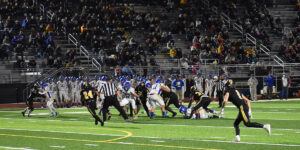 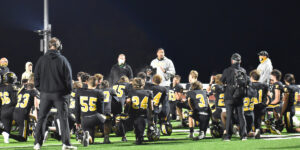 Festus responded with a 35-yard hookup from Rickermann and Kaian Roberts-Day to regain the lead 14-7, but North County was not to be denied, going off for three consecutive scores to close out the first quarter. As the clock ticked down to zero the Tigers found themselves behind 28-14.

Then the defense for both sides took over. The Tigers did manage a five yard TD run from Cayden Glaze to cut the lead to 28-21, but that was the only offense in the second or third quarter for either team.

Enter quarter number four. After a strong defensive stand, the Tiger offense picked itself up by the bootstraps and went to work. A punch-in from the one yard line by Cole Wagner made it 28-27, but the extra point was no good. The Raiders took advantage of this momentum and tacked on another seven points from a 48-yard TD run and subsequent extra point, making it 35-27.

Down but not out, the Tigers and Wagner went to work once again on offense as he snagged a 63-yard bomb from Rickermann. The two-point try failed, making it 35-33, but Rickermann and his crew weren’t done yet. This time he hooked up with Cayse Martin for a 24-yard strike and the comeback was complete. The defense held strong the rest of the way and the Tigers kept their perfect season alive with a hard-fought 39-35 victory.

When asked what it felt like to have the game come down to the wire and come out on top, Wagner replied, “It was a great feeling never giving up and continuing to fight with my guys. We might not have played our best football but coming out on top of that game really shows you the type of heart that this team has.”

Heart and talent to boot. Rickermann was a stud once again, throwing for 330 yards and four TDs against two picks, and his offense out-gained the Raiders 416 to 371 overall. Most of the play was through the air, but Glaze and Wagner each had a TD and rushed for 27 and 20 yards, respectively.

Wagoner led the receiving core with 77 yards and was one of four different wideouts to catch a touchdown. Martin, who caught one of those scores, also led the team in tackles with eight and Wagner added five and a sack to go along with his receiving TD.

Likely not the way the Tigers would have drawn this one up, but they got the job done. Plus the nail-biters are always the games that are the most memorable and nostalgic in the rearview mirror.

The Tigers take to the road and look to go 7-0 this week in a cake matchup with the struggling 1-4 Pacific Indians.