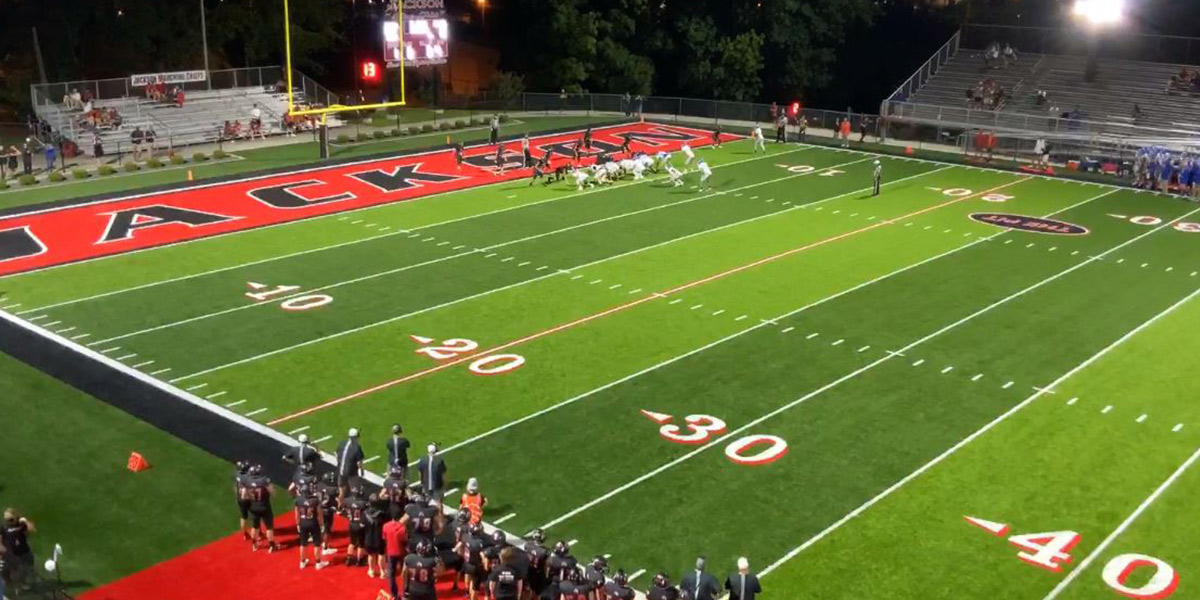 The Hillsboro Hawks swallowed a tough pill in The Pit on Friday night, falling 55-14 to the imposing Jackson Indians, but despite the score the team believes there is still room for optimism.

The Hillsboro Hawks swallowed a tough pill in The Pit on Friday night, falling 55-14 to the imposing Jackson Indians, but despite the score the team believes there is still room for optimism.

Although they were outscored 55-0 after three quarters WR/DB Tristan Jones championed that sentiment by stating, “Jackson is a heck of a team and we knew that going in. We saw it as an opportunity to get better and now we have a lot to reflect on. We did some good things last night but we also had a lot of little mistakes. We just need to clean up some of those mistakes over the next few weeks and I truly believe our team will be tough to beat.”

Three quick strikes and a field goal in the first quarter set an uneasy tone for the game, and the blocked punt returned for a touchdown added insult to injury… but the Hawks pushed back in the second half. They held the Indians to just six points (all in the third quarter) and managed to rush for a pair of three-yard scores in the 4th quarter to get on the board.

Bryce Davidson scampered in for the initial score at 2:57 of the 4th and John Bennett III followed suit with just 14 seconds remaining in the game. Kicker Andrew Brody connected on both extra points.

“Our kids battled and played hard the whole game. We knew it would take a mistake free game in order to come away with a win.”

That likely relieved Head Coach Bill Sucharski to a degree, but he liked the way his boys handled themselves from the jump. “The kids came out and put a good drive together to start the game, started at the 20 and moved inside their 30 but stalled out. Our kids battled and played hard the whole game. We knew it would take a mistake free game in order to come away with a win.”

A mistake-free game wasn’t in the cards, but going up against a tough opponent, the Hawks showed moxie and chose to finish strong while piling up some noticeable accomplishments along the way.

Coach Sucharski noted a few standouts by saying, “We threw for over a 100 yards which was nice to see. Austin Romaine and John Bennett made some good catches and runs from the full back spot and Austin Romaine was all over the place on defense.”

The Hawks also put up just 69 fewer total yards (230 to Jackson’s 299) and out rushed the Indians 126 to 65. They also dominated in time of possession (32:24 to 15:17), but were hurt by turnovers and big-play scoring drives. Still, they had impressive performances from multiple offensive players. Griffin Ray and Junior Arnold combined for 104 passing yards, Jaxin Patterson rushed for 66 yards on just 15 attempts and Austin Romaine led the team with 58 receiving yards on a pair of catches. He also led the team in tackles with nine, and added half a sack. Zach McNees led the team with 1.5 sacks on the night.

Offensive Lineman Jordan Jarvis believes in his squad and feels the best is yet to come, saying, “I think we played hard, we gave it all we had. We need to stop half ass at practice, but be ready… we are going to be a different team next week. We got cape and then conference games next!!!”

The Hawks know they faced a tough opponent and took it on the chin in this one, but they also know that they did a lot of things well and have the grit and determination to stick it to the next team. After a tough 0-2 start they will try and put that positive energy into a battle with Cape Girardeau next week.