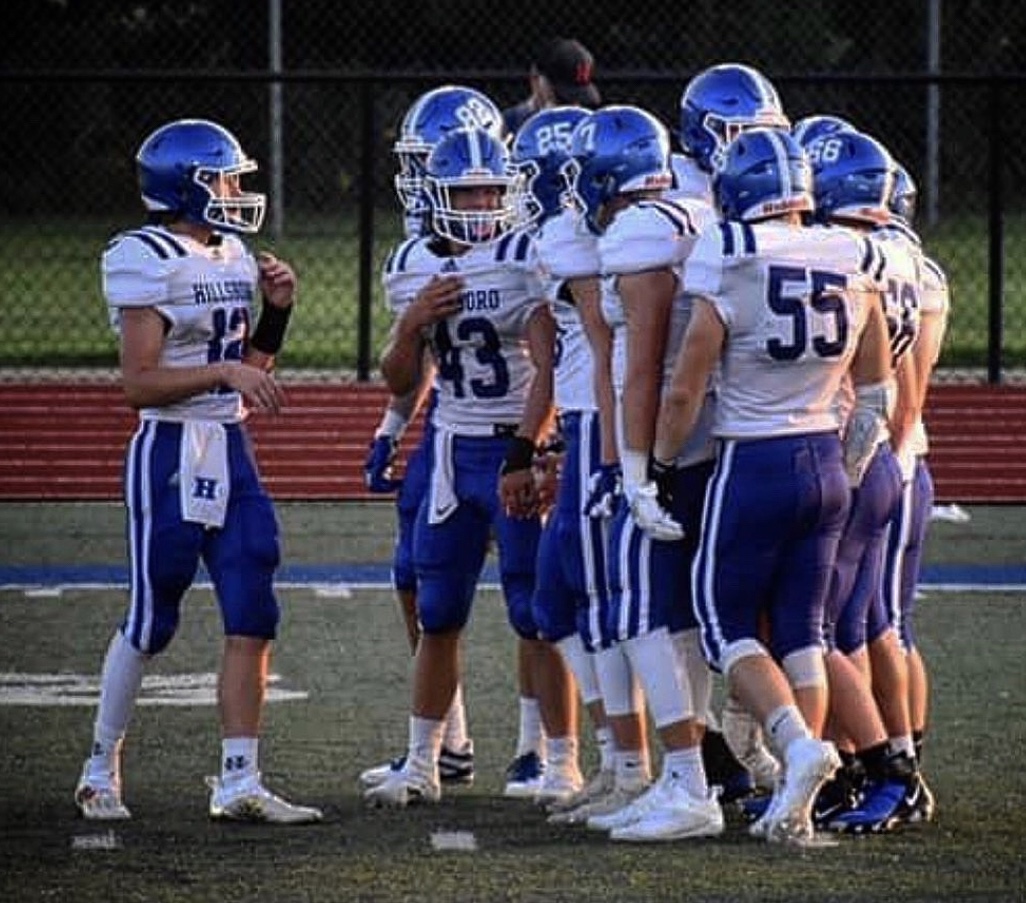 In a game where points were plentiful, the Hillsboro Hawks fought hard after an early deficit, but just couldn’t come all the way back. Hillsboro opens the Bill Sucharski era with a ten point loss.

Slow starts at the beginning of a season aren’t at all uncommon.  But the slow start the Hillsboro Hawks experienced at the beginning of their football season opener at Northwest may have cost them the game.  After falling behind 16-0 halfway through the second quarter, the Hawks fought valiantly to come back, but fell ten points short, losing 37-27 to the Lions.

“I was extremely proud of our players and the resiliency that they showed,” new head coach Bill Sucharski commented.  “They played with great effort.  We did a lot of good things, but a few key penalties hurt us in the end.  We need to cut down on our mistakes and learn from them, and keep getting better day by day.”

The Hawks don’t have that far to go.  They out-gained the Lions offensively by 15 yards.  But the mistakes mentioned by Coach Sucharski, to the tune of a turnover, a botched punt attempt, and nine penalties for 75 yards, did in the Hawks.

After Hillsboro’s first drive stalled, Northwest tallied an eight yard touchdown pass to go up 7-0.  Then, early in the second quarter, the Lions went up by two touchdowns after a one yard run.  Hillsboro took over offensively, couldn’t muster much, and then prepared to punt.  The snap eluded punter Austin Romaine, and despite the Hawks recovering in the end zone, a safety was secured, and the home team was up 16-0.

“We definitely started a little slow out of the gate,” Coach Sucharski admitted.  “We had some unfortunate, not smart, penalties that killed our first drive of the game.  We had the snap sail over our heads for a safety on a punt, and we put ourselves in a hole.”

But, like any gutsy Hillsboro team would do, they fought back.  Just three minutes after the safety, Jaxin Patterson took the ball to the end zone on a ten-yard TD run.  The point after failed, but the Hawks had pulled to within ten points.  And then, with 1:18 left before the half, Romaine went on a 41 yard touchdown jaunt.  The conversion pass from Griffin Ray to Tyson White was successful, and all of a sudden, Hillsboro was trailing just 16-14.

But as quickly as the Hawks had grabbed momentum, Northwest took it right back.  Just 14 seconds later, a 52-yard touchdown pass connection gave the home team a 23-14 halftime lead.

After the break, Ray guided the team down the field, culminating with his own one-yard TD run with 5:06 to go in the third.  Andrew Brody‘s kick split the uprights, and it was back to a two-point ballgame at 23-21.  However, right before the quarter ended, another big pass play produced points for Northwest, this time from 49 yards.  The Lions took a 30-21 lead into the final quarter.

Maybe lost in the shuffle of the third quarter was a touchdown the Hawks scored, but couldn’t put on the board.  Gabe King returned a kickoff, but the score was nullified by one of those nine penalties Hillsboro incurred.

The Hawks gave it one more push when, with 6:59 left in the game, Ray connected with Watson for a 46-yard touchdown pass.  After the extra point was missed, Hillsboro was still within three points and had a fine chance to tie or win.  But like the home team had done all night, they answered with a 36-yard touchdown pass to push the eventual final margin to 37-27.

“Unfortunately, Northwest hit some big pass plays and made two unbelievable catches that set up TDs,” Sucharski lamented.  “Hats off to those guys, because they responded every time we cut the lead to two or three.”  The Lions had 243 yards passing on just eight completions.  They averaged just over 30 yards with each catch.

But there were a lot of bright spots for Hillsboro.  Ray was seven-of-ten passing for 82 yards and a touchdown pass.  The rushing combination of Romaine and Patterson was tough on the Lions.  Romaine rushed eight times for 107 yards, and said being healthy to start the season was a welcome feeling.  “It felt great honestly,” he said after the game.  “I was a little nervous before the game warming up and in the locker room, but once kickoff and a few defensive plays occurred, I wasn’t nervous anymore at all.”  Patterson rushed 16 times for 89 yards.  He said, considering everything that’s going on, the Hawks performed well.  “Without a jamboree, 7-on-7, or any competition besides our own team before our first game, I couldn’t be more proud of my teammates.  They played their hearts out.  If we fix and focus on our little mistakes, I feel that game would have had a different outcome to it.”

Coach Sucharski liked what he saw from his backfield.  “Austin had a great game running the ball for us, and he reeled off some big runs.  Jaxin provided his tough, hard running style for us, and Griffin played pretty good for his first varsity start.  All three of those guys are sophomores, and they definitely stepped up for us.  Ray said his first varsity start was a highlight.  “I felt great,” he confessed.  “I was ready from the start, definitely had a little nerves, but those went away quickly.  We had a few mistakes that caused us to beat ourselves, but I’m confident that we will get that fixed quickly.  Other than the mistakes we made, I felt as if we played very fast and physical football, and I’m proud of the guys.”

Watson caught three passes for 63 yards and a TD.  “Tyler made two great catches and took one in for a TD,” Sucharski noted.  “I thought we threw the ball well.  Ray only threw three incompletions, and two of those incompletions were drops.”

And Sucharski liked his defense, in spite of the four touchdowns given up through the air.  “Defensively, Zach McNees led the way and played really well.”  McNees was in on eight tackles, five of which were behind the line of scrimmage.  He also had a sack.  Romaine also was involved in six tackles.  He, too, recorded a sack.  “We held them to 100 yards rushing and recorded ten tackles for loss as a team,” Coach Sucharski added.

The schedule doesn’t get any easier for the Hawks as this Friday, the team will travel to Jackson to meet the Indians.  Game time is scheduled for 7:00 p.m.