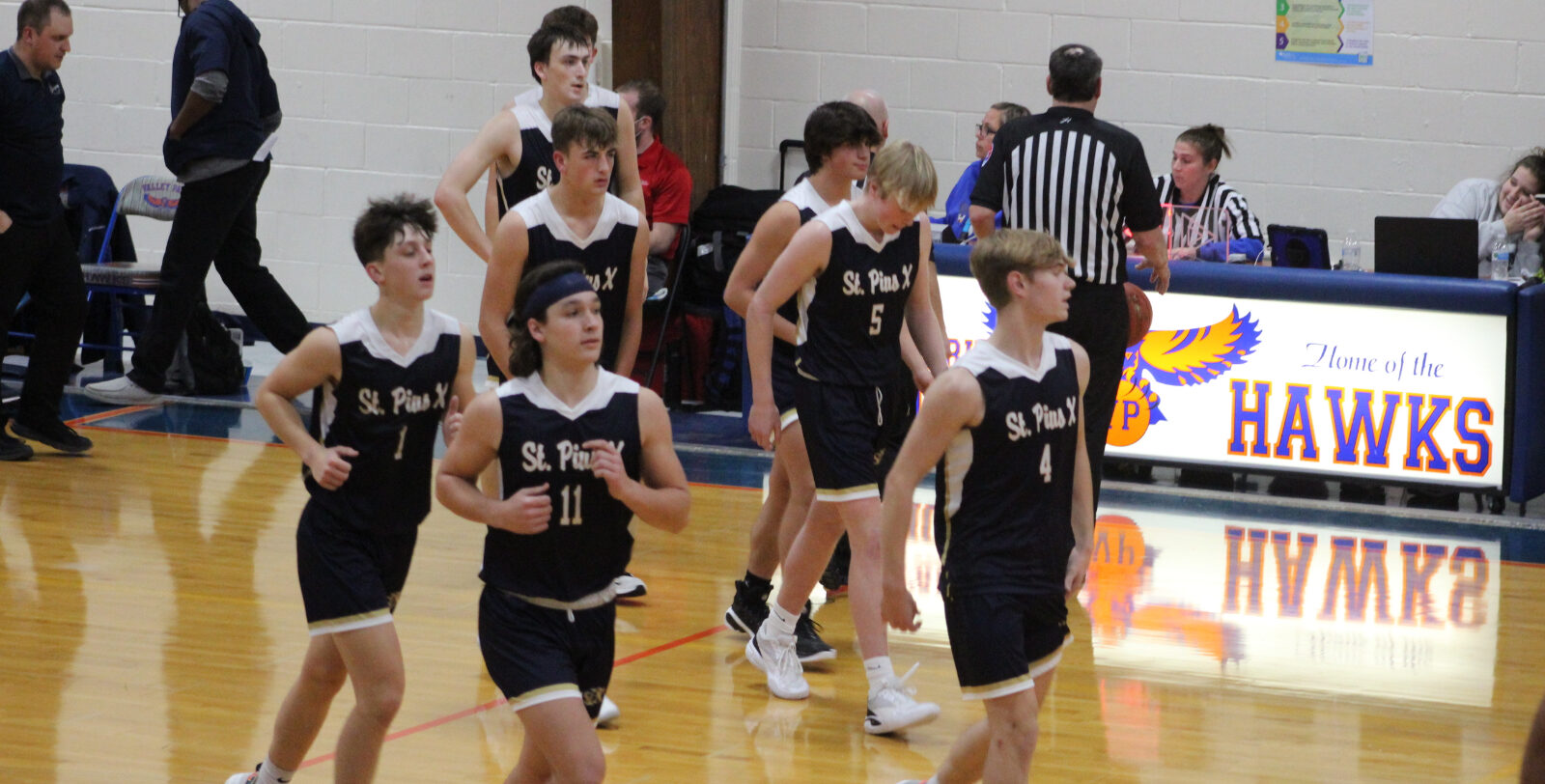 St. Pius gets their first win of the season with a 60-29 blowout of Valmeyer. They play Brentwood for the 3rd place game in the Valley Park Tournament.

Sometimes playing back-to-back games causes a team to play much slower and sluggish on the second night. Unfortunately for the Valmeyer Pirates, the St. Pius X Lancers didn’t let the scheduling bother them.

On Tuesday night, the Lancers picked up their first win of the season, defeating Valmeyer 60-29 in the Valley Park Tournament, after losing just 24 hours earlier.

The first quarter was a little sloppy, but St. Pius X Head Coach Chris Miller told his team to keep up the intensity on defense.

“We talk about how your offense cannot affect your defense; if you’re not playing well with the ball, make it tough on the guy you’re guarding,” said Miller. “We preach that everything starts with defense.”

Defense was definitely the solution to the Lancers’ problems early as they only held a 5-1 lead midway through the first quarter. The Lancer press continued to wear on their opponent as the Pirates made poor decisions (8 turnovers) and poor shot selection (9% from the field). Senior Dabrein Moss also put his mark on the game as he powered the Lancer offense in the first quarter. Scoring 12 of the Lancers’ 14 points, Moss helped open up offense as St. Pius X finished the quarter on a 9-2 run and led 14-3 at the end of the first quarter.

In the second quarter, Valmeyer continued to struggle to score against the St. Pius X pressure, as they shot only 30% from the field during the quarter and scored nine points in the frame as a team. While defense was causing havoc on the Pirates, the Lancer offense got a key contribution from another player. Junior John Whitman got hot in the second, hitting three 3-pointers in the quarter by himself, and helped propel the Lancers to a 32-12 halftime lead.

As inexperienced teams do, the Lancers began to take their foot off of the gas after halftime, and the Pirates offense began to click, as they tallied 15 points in the third quarter alone. Unfortunately for Valmeyer, the Lancer offense failed to give way as they hammered out 16 points of their own in the frame, and held a 48-27 lead going into the 4th quarter.

The fourth quarter did not bear any of the same fruit offensively as the third for Valmeyer, who only managed two points in the quarter. St. Pius X finished off the Pirates by dropping 12 points of their own and triggering the mercy clock to finish off their opponent 60-29. Picking up the first win was important, but Coach Miller is still looking for improvement.

“I was very happy with our defensive effort except during the third quarter,” said Miller. “I think we got a little too comfortable and great teams don’t do that. Too many turnovers despite the big win means we can clean up our game and do a better job taking care of the ball.”

Moss was a beast in this one with 26 points, 13 rebounds and three assists, while Whitman had 18 on six three-pointers and 15 rebounds for a double-double.

St. Pius X improves to 1-2 on the season and takes on Brentwood for 3rd Place in the Valley Park Tournament, Thursday night at 7:00 p.m.