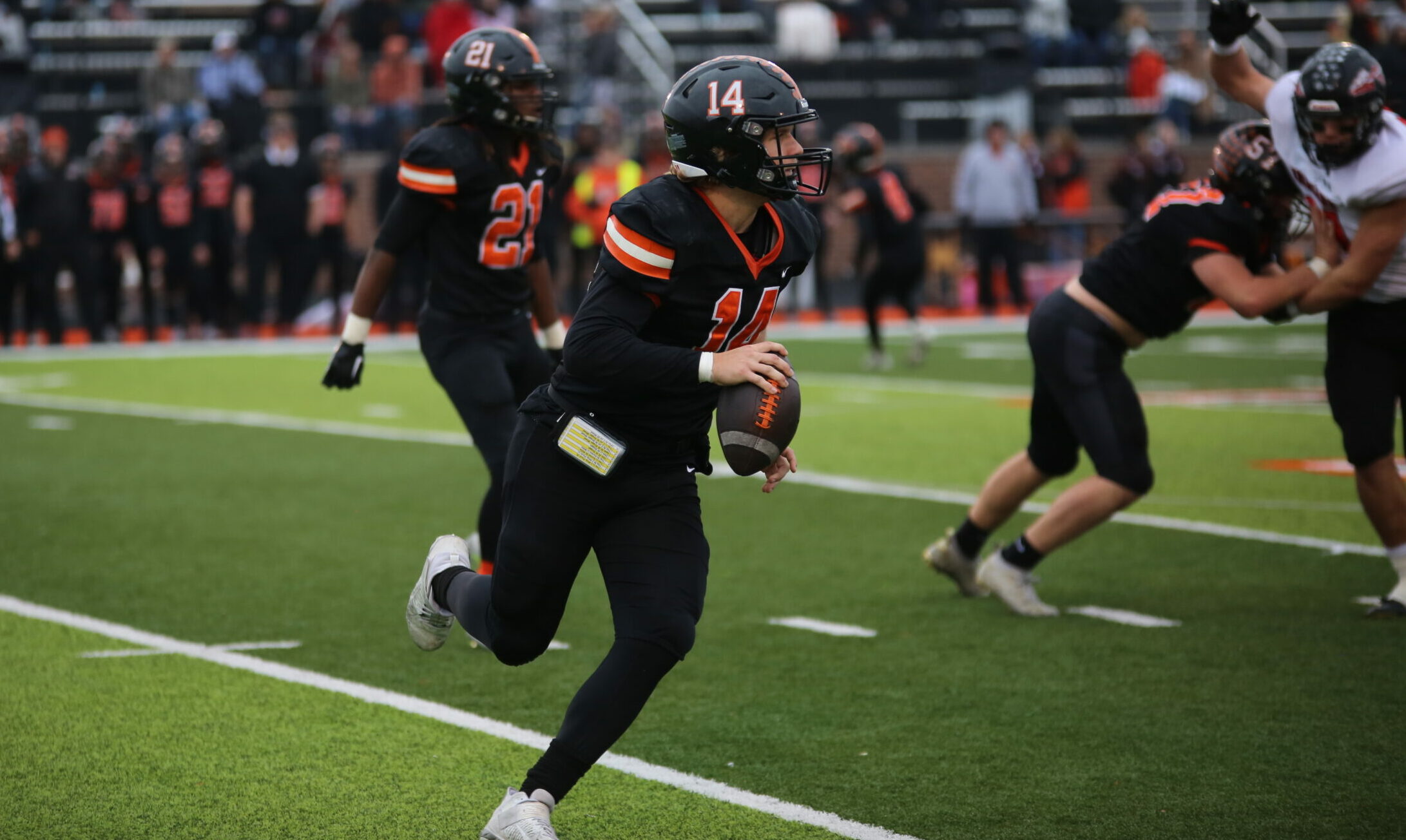 The Cape Central Tigers fall in the State Semis, but execute a brilliant season that falls just short.

The final game of the season didn’t go quite as planned for the Cape Central Tigers, but it doesn’t begin to besmirch the reputation this team garnered in 2022. Head Coach John Gibbs‘ Tigers finished with an incredible 10-4 record, won the Class 5 District 1 Championship and made it all the way to the State Semifinals.

The upstart bunch out of Cape Girardeau fell 56-20 to Fort Osage in the State Semifinal, but it was a banner year for these Tigers regardless. Relatively new to Class 5, they made a statement this season that this is a historic program that has proven to be a tough matchup for anyone on their schedule.

As for the final game of the season, the Tigers had a stellar first half, but Fort Osage was a bull in a china shop in the second, and Central just couldn’t keep up. The 11-2 Indians, and the pride of Independence, MO, are still very much alive in the State Playoffs and they struck first in this one.

A short drive at the 8:29 mark of the first quarter resulted in a one-yard TD run to give them a 7-0 lead. But the Tigers answered with a monster 65-yard pass from QB Morgan Diamond to Wideout Marshon Edwards to cut the lead to 7-6.

Central then stopped the Indians on their next drive and, after taking over, quickly scored with another passing touchdown. This time it was Diamond to Marquel Murray for a 25-yard strike, and just like that, the Tigers had themselves a 13-7 lead.

The wheels would come off after that though. A 48-yard punt return for a score gave Fort Osage a 14-13, which was one they wouldn’t relinquish. They went on to punch in two more TDs on back-to-back four yard rushes to create a 28-13 lead at the half. A costly fumble on the kickoff led to the final touchdown for the Indians.

That didn’t change in the second half. Osage ripped off seven and 58-yard rushing TDs in the third quarter before driving a nail into the coffin with a pick-six. That made it 49-13 and more or less sealed he deal.

Clayton McClard did have a nice three-yard receiving TD on a tricky reverse from Zai’Aire Thomas in the fourth quarter, but the season wasn’t salvageable at that point. Coach Gibbs had this to say after the 56-20 defeat, “We just couldn’t sustain our early momentum, but I take my hat off to them because they have a very good, well-coached football team. Their experience being in the Semifinals last year probably helped them a little bit.”

He followed up with, “I am really proud of our kids and thankful to have been a part of their great season. Also really proud of the Seniors who stayed with us and worked everyday to get better.”

Diamond is one of those Seniors who is moving on. He was excellent in this one with 223 yards passing, two TDs and also had eight tackles on defense. Co-Senior Edwards was a beast in this game as well with a receiving touchdown to go with his team-leading 154 yards.

McClard, who had 33 yards and a TD to go along with his team-high 11 tackles, will also be moving on after this year. He will be joined by Keontae Dixon, TJ Mackins, Lataveaun Smith, Zarique Childs, Paxton Schiwitz, Soren Janzow and Azeriontay Ray to sum up the list of graduating Seniors.

It was an incredible year that defied expectations no matter how you draw it up though. This group really came together and relied heavily on, not just their superstars, but their depth as well. Next year will likely be a challenge with all the graduating Seniors, but there is still foundation in place.

Shifty, lightning in a bottle Running Back Thomas is just a Sophomore, so he will lead a group that will look to repeat this year’s success. He’ll have help from Keyshawn Boyd and Murray, who are just Freshmen this year, and the defense remains intact as well with Manny Kinder, Max Vogel and the Pittman boys (both Gavin and Deklin).

The Tigers and Coach Gibbs should be proud of this season and be riding high going into next year with a lot of talent on the roster and a lot of fire in their bellies.

Congrats on an incredible 2022 campaign.