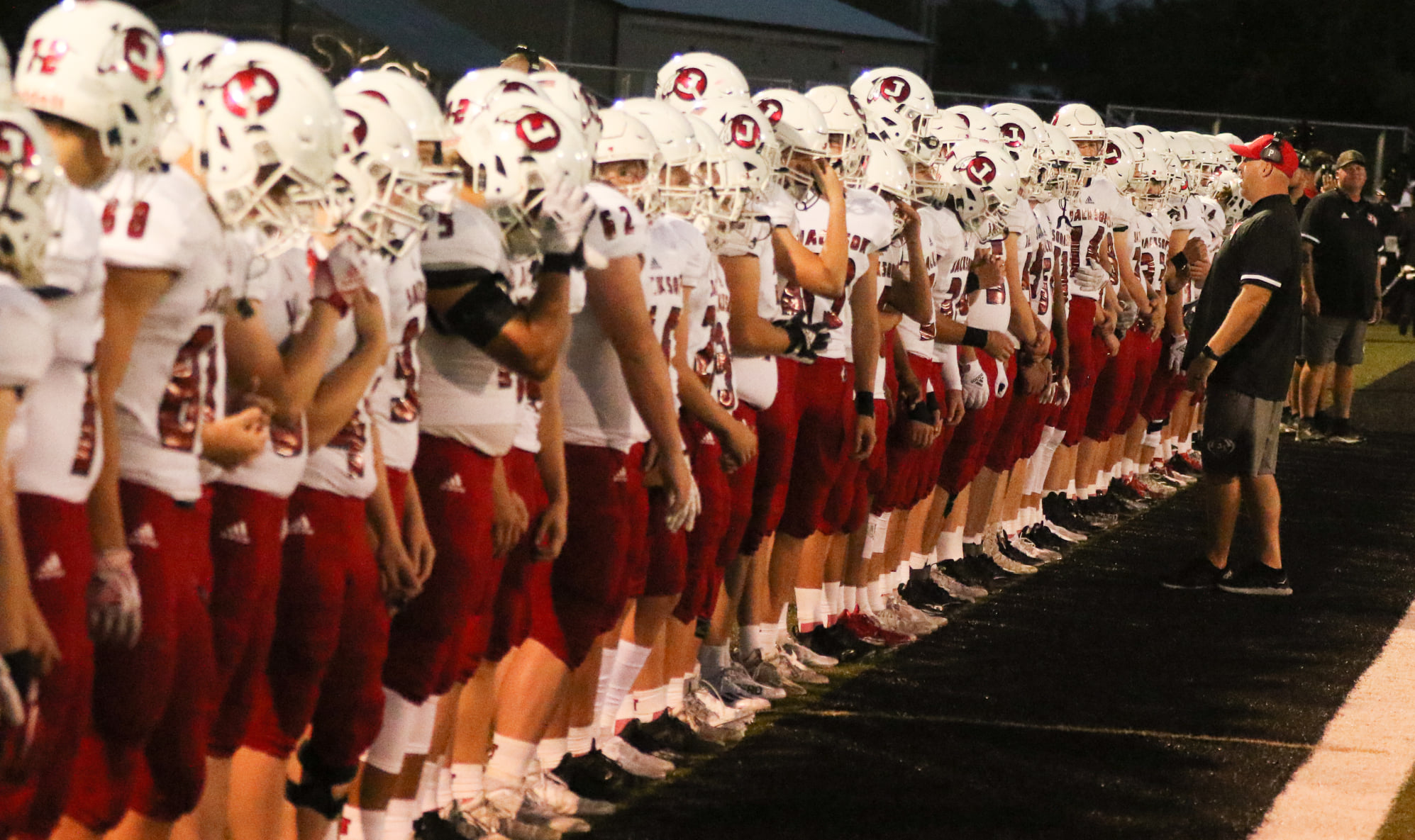 The Jackson Indians win their fourth straight game and get Coach Eckley his 100th win with the program after a 68-13 trouncing of the Sikeston Bulldogs.

It’s official. The Indians are back, and they’re taking no prisoners.

After an uncharacteristic 0-2 start to the season, Jackson has now rattled off four straight victories with Friday night’s 68-13 drubbing of their latest victim, the Sikeston Bulldogs. This win was a special one too, as the Indians turned the dial to 11 for Head Coach Brent Eckley, who, after the victory, now has 100 career wins calling the plays for this Jackson program.

His magical night kicked off in style, as just over four minutes into the game, QB Zach Calder hit Wideout Isaiah Davis with a 25-yard dart into the endzone for a 7-0 lead. Yes, it was early but it was a lead that Jackson would not relinquish, and it was just one of four first-quarter touchdowns.

Calder punched one in from the one-yard line to make it 14-0 before Carter Shipman took it to the house on a nine yard scamper. Davis converted the two-point try and Jackson was up 22-0. Co-QB Adrian Fox then got into the mix with a three-yard rushing touchdown of his own, and Davis again converted on the two-point try. When the dust settled after the first 12 minutes, Jackson had a commanding 30-0 lead.

Sikeston would get on the board early in the second quarter with a four-yard TD run, but Jackson answered right back with Calder hitting Kai Crowe on a 23-yard strike into the endzone. Again, the two-point try was converted by Davis. Then, on the following possession Davis took it in himself from ten yards out for his second TD of the game, and the Indians must have seen something in the Bulldog defense that was infinitely exposed, because Davis AGAIN walked in the two-point conversion. That gave the Indians a 46-7 lead at halftime.

After the break the ground game wasn’t done, as Chase Fischer and Jason Goodman ran in scores from six and one yards out, respectively, filling in admirably for injured running back Tony Williams. Skip ahead to the four quarter and it was Fox once again getting in on the fun for the Indians’ final TD of the game. He hooked up with Gavin Alspaugh for a 76-yard bomb, and after the two-point conversion by Boyd Langford, Jackson was up 68-7.

Sikeston would tack on another late touchdown, but it was far from meaningful, and the Indians had themselves a ridiculous 68-13 victory that moved Coach Eckley into triple-digit win territory.

Hitting the century mark for Eckley was certainly the most notable achievement of the night, but these Indians put up some incredible individual numbers. The QB duo of Calder and Fox was impressive again, as Calder went 11-of-14 for 169 yards and two TDs, while Fox was 4-of-7 for 126 yards and a score. Together the two quarterbacks also accounted for 51 combined yards on the ground and each had a rushing touchdown.

The receiving game was dominated by Davis and Crowe, per the usual, as the two blazing wideouts each caught seven passes, eclipsed 100 yards and caught a TD pass. Davis lead the way with 115 yards, and had a monster game overall with 21 rushing yards, a TD on the ground and five (yes, five) successful two-point conversions. He accounted for 22 total points in the endzone.

As for the vaunted Jackson defense, it was business as usual. They won the turnover battle 4-1 and held the Bulldogs to just 153 total yards (76 through the air and 77 on the ground). Griffin Horman was huge, leading the way with eight tackles, three assists, two for a loss and a big time fumble recovery. Fisher Stevens, TJ Altenthal and Tyson Ford all had interceptions and the Indians were a blanket that the Bulldogs just couldn’t find their way out of.

This was a dominant win in every facet of the game, and Jackson is on a roll. They will look to keep the line moving next week as they host Confluence Prep Academy and extend their winning streak to five games.