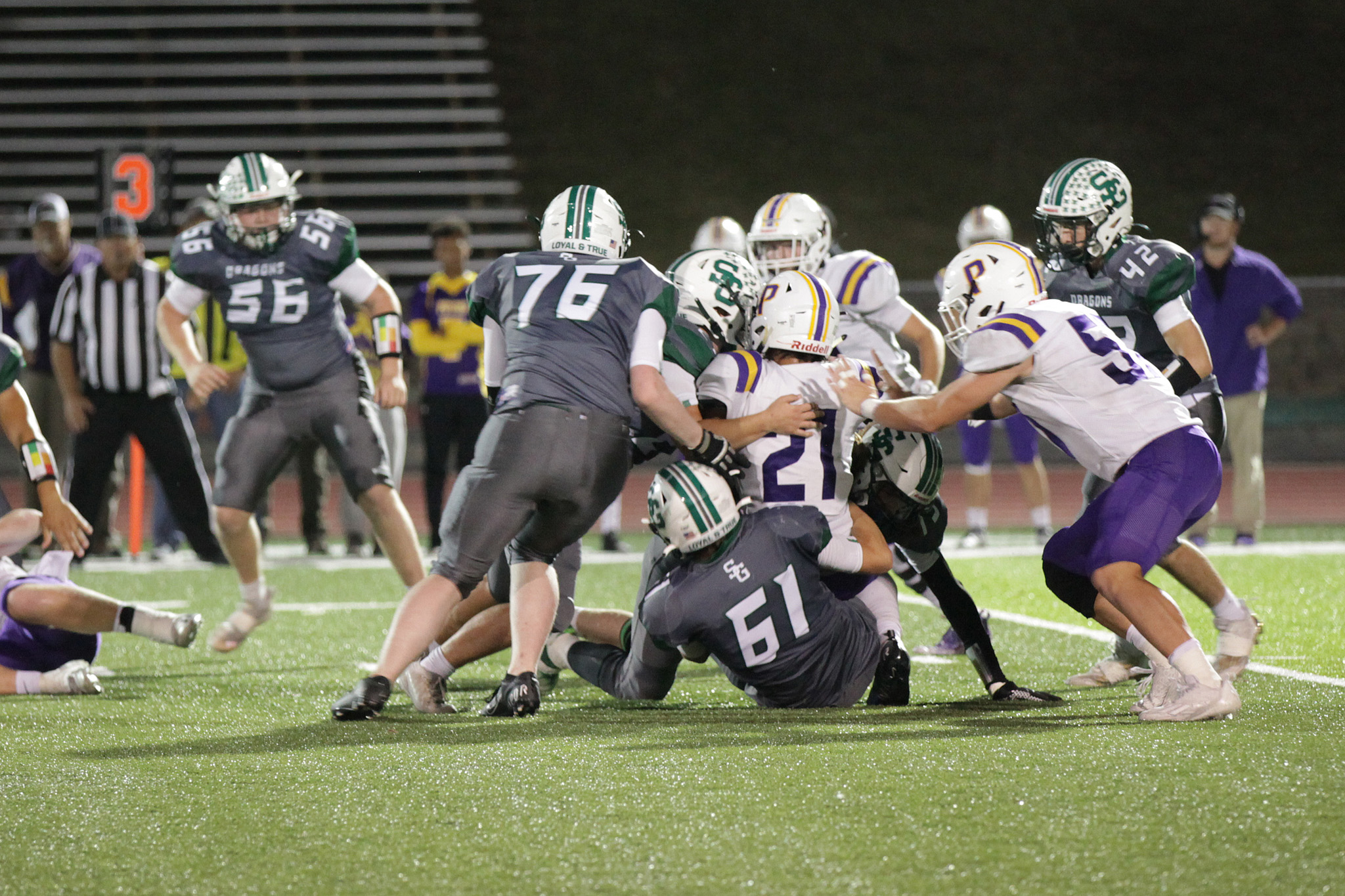 After a rough loss last week, the Dragons destruction of the Trojans gets them back on track and points them in the right direction for the remainder of the season.

After a tough loss the previous week to Central, Ste. Genevieve steered the boat back on course this week, earning a big win over Potosi. Last Friday, September 30th, the Ste. Gen Dragons hosted the Trojans in an important Class 3 matchup for both schools, looking to move up the rankings before being seeded for districts. On this night, the Dragons managed to toast the Trojans, winning the game 26-12.

This was a must-win for the Dragons who were still sour from the week prior. They came out looking tough with a chip on their shoulder and something to prove. Ste. Gen started the scoring with a 44-yard touchdown run by Jack Farlow, then added the extra point to make it an early 7-0 lead. However, Potosi answered quickly with a drive resulting in an eight-yard touchdown pass. The extra point was missed, so Ste. Gen retained the lead 7-6 after one quarter.

The Trojans took over in the second quarter, and on their first possession, their quarterback completed a 49-yard touchdown pass to jump up 12-7. They went for the two-point conversion but were stuffed, keeping them at a five-point lead.

Opening up the second half, Ste. Gen got the ball. QB Aiden Boyer aired out a monster 44-yard pass to Devin Flye that resulted in a touchdown. This time, the Dragons went for two but also failed. However, they now had the lead 13-12.

It didn’t take long for the Ste Gen defense to come up big as they forced Potosi to give the ball back. The Dragons drove down to the five-yard line, setting up a quick Boyer pass to Jacob Johns for their third touchdown of the game. The Dragons opted for the extra point this time and were successful, giving them an eight-point lead, 20-12.

It was all Ste. Gen in the fourth quarter. Their defense absolutely shut down Potosi who never was able to score. The Dragon however did manage to put up one more touchdown of their own, which came on a seven-yard run from Ayden Butcher. The two-point conversion failed, resulting in a final score of 26-12.

Ste. Gen dominated most of the statistics. They ran 76 plays for a total of 358 yards. 119 of those yards came from the arm of Boyer who aired it out 20 times, completing 10, including two touchdown passes. Flye was responsible for one touchdown, from three catches covering 65 yards, while Johns had the other touchdown on three catches, providing 36 yards. With three catches of his own, Jayden Rhinehart picked up 23 yards.

However, rushing was where the Dragons really shined. They moved the ball 239 yards on the ground, with Butcher responsible for 147 of those yards on 27 carries, including a touchdown. Farlow added another 79 yards and a touchdown on 17 tries. Boyer himself notched 12 yards on three attempts.

Now sporting an impressive 5-1 record, Ste. Gen will look ahead to next week and prepare for what will surely be their toughest game of the season, as they will travel to Valle Catholic to take on the perfect 6-0 Warriors. Even though their opposition looks to be as solid as they come, the Dragons will be prepared to do battle, as they always are.

Next Friday, October 7th, Ste. Gen will need to play excellent football, and can make no mistakes if they hope to walk away victorious.