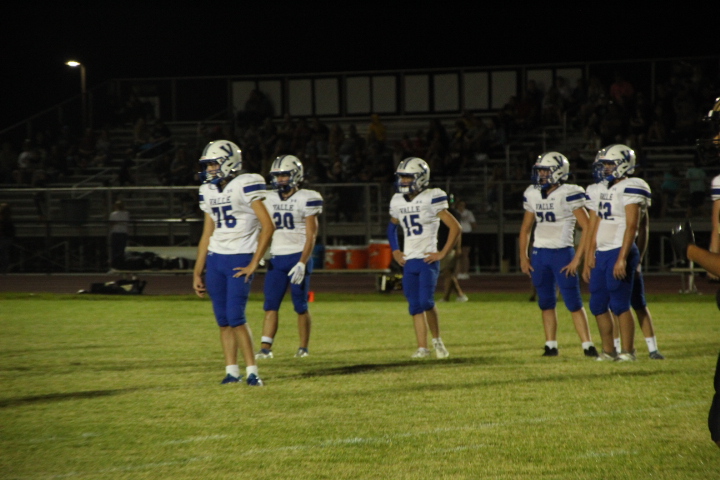 Valle Catholic Lights Up the Scoreboard Again at Potosi

The Valle Catholic Warriors runs wild in a 61-point first half at Potosi to improve to 4-0 on the season.

The Valle Catholic Warriors football team is putting up numbers that would make most high school basketball teams proud.

The Warriors improved to 4-0 and 2-0 in the Mississippi Area Conference White Division with a 68-13 drubbing of Potosi on Friday night.

Valle has scored more than 60 points twice already this season and is averaging 59 points per game.

Just when you thought the Warriors had set a mark that would be tough to top when they scored 53 points in the first half last week at Fredericktown, they surpassed it at Potosi with an unbelievable 61-point first-half performance.

Valle’s offense again had the precision of a fast-break basketball team.

The barrage started less than two minutes into the game when quarterback Chase Fallert hit his cousin Grant Fallert on a 21-yard touchdown pass. Will Kuehn added the PAT to make it 7-0.

Less than three minutes later, Bryce Giesler found the end zone on a three-yard run. The PAT made it 14-0 with 7:29 left in the first quarter.

Just 12 seconds later, Giesler scored again, this time from 18 yards out. The extra point was no good, so the score remained 20-0 at the 7:17 mark.

Moments later, Giesler crossed the goal line again on a 33-yard run. Again, the PAT failed and it was 26-0 with 5:38 to go in the first quarter. Giesler’s three touchdowns give him nine on the season.

Valle wasn’t done finding pay dirt in the first quarter though. Tim Okenfuss took his turn in the end zone with a three-yard run, and Kuehn split the uprights this time to make it 33-0 after the opening quarter.

Okenfuss opened the scoring in the second quarter with a 40-yard run at the 9:47 mark. The successful PAT made it 40-0.

Just under three minutes later, Alex Viox scored his second TD of the season on a 33-yard run. The PAT made it 47-0.

Carson Tucker joined the party next with a 14-yard pick six. This is the second consecutive game where Tucker has returned an interception to the house. He also had fumble recovery for a score last week. The PAT made it 54-0 with just 6:41 remaining in the second quarter.

Finally, Potosi gave its fans something to cheer about over the next few minutes. Quarterback Blake Coleman tossed a TD pass to Luke Brabham, but the conversion failed. So after just bit of noise, Valle led 54-6 with 3:43 left in the first half.

The Trojans scored again at the 1:12 mark when Coleman ran it in from five yards out. The PAT was good to make it 54-13.

Just when Potosi thought it had the momentum, Rylan Fallert returned the ensuing kickoff 86 yards for a score to make the halftime score 61-13 after Kuehn converted his fourth straight PAT.

After a scoreless third quarter with a continuous clock, the Warriors capped the scoring at the start of the fourth on a 14-yard run by Josh Fallert, his first of the season. Kuehn booted the PAT to make the final 68-13.

This concluded a three-game road trip for the Warriors in which they outscored their opponents 175-33, and Valle rolled up 407 yards rushing led by Giesler’s 156 yards on just ten carries.

Chase Fallert was efficient in the passing game as well. He completed 11 of 16 for 151 yards and a touchdown. Grant Fallert led the receiving corps with five catches for 54 yards and the TD, testifying that the Valle offense is something to be reckoned with. The Warriors are averaging 514 total yards per game.

On the other side of the ball, A.J. Basler led a balanced defensive attack with five solo tackles and two assists. Eighteen different players collected a solo or assisted tackle. In addition to Tucker’s interception, Okenfuss collected a fumble recovery. Another dominant effort from virtually every player on the roster.

The Warriors know how to spread it out.

After being “road” Warriors the past three weeks, Valle now embarks on a four-game homestand starting next Friday, September 23rd against another 4-0 squad in St. Vincent. Kickoff at Father John Dempsey Field is set for 7 p.m.

Valle Catholic Lights Up the Scoreboard Again at Potosi