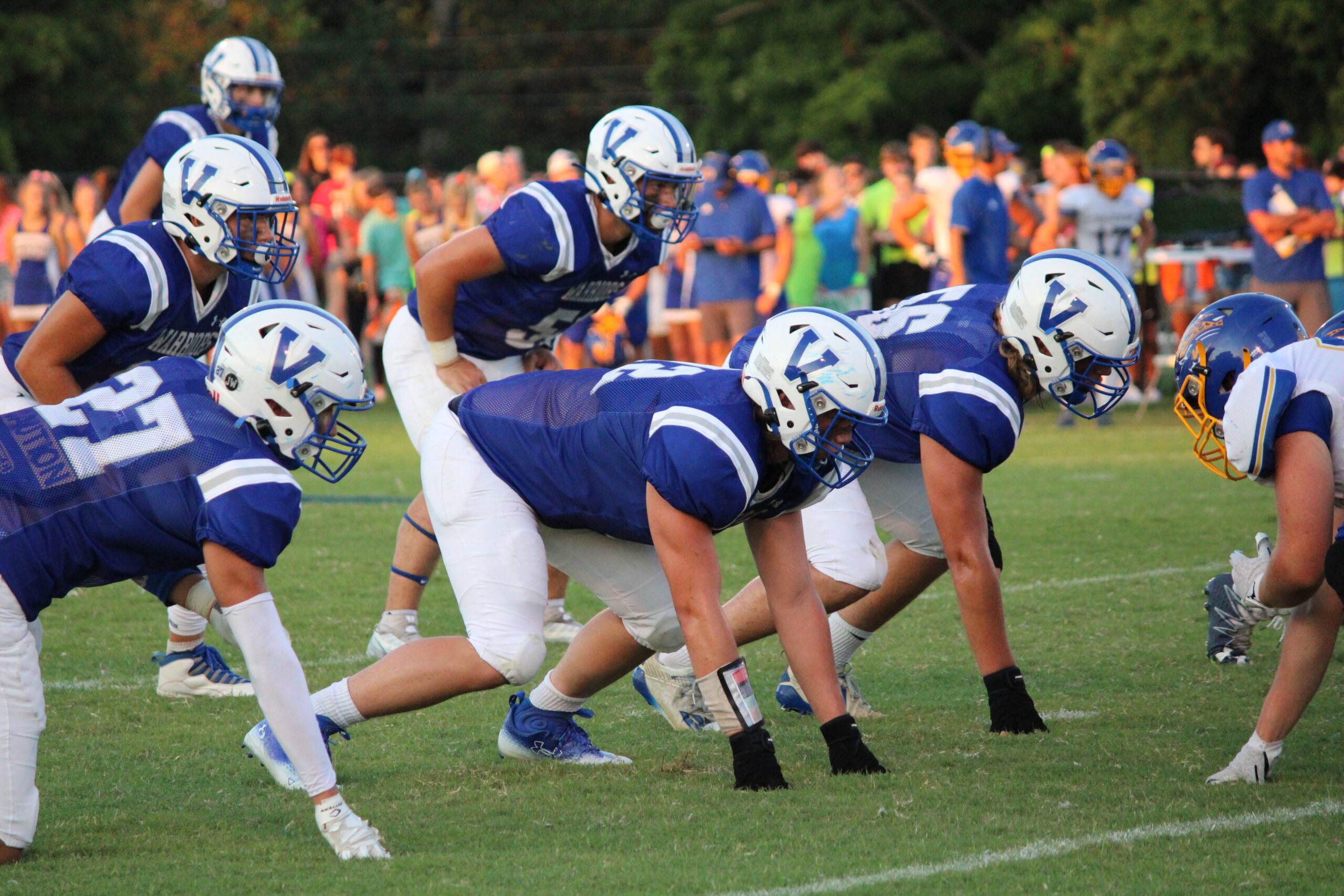 An incredible fourth-quarter comeback, featuring five TDs, propels the Valle Catholic Warriors over Seckman for the program’s first win over a Class 6 school.

The Valle Catholic football team sent a message to other Class 3 schools in the region after a season-opening 61-36 win over Class 6 Seckman at Father John Dempsey Field in Ste. Genevieve on Friday night. The victory marked the first time Valle has beaten a Class 6 school in their storied history.

The Warriors trailed 36-27 entering the fourth quarter, but exploded for 34 unanswered points in the final stanza to earn the victory.

The five-touchdown outburst to close the game featured scores set up by a blocked punt, an interception and a fumble recovery.

As Valle fans are accustomed to seeing, their team scored first less than four minutes into the game. QB Chase Fallert hit Rylan Fallert on a 60-yard touchdown strike. Will Kuehn then knocked home the PAT to give his team a 7-0 lead.

It didn’t take long for the Jaguars to answer though. Just two minutes later, Cole Ruble took it to the house on a 56-yard run. The PAT tied it 7-7 with 6:04 left in the first quarter.

Late in the first quarter, the Warriors broke the tie on a 42-yard touchdown pass from Fallert to Bryce Giesler. Kuehn again nailed the point after to make it 14-7.

Valle showed signs of opening the game up early in the second quarter when Fallert tossed his third TD pass of the game. This time it was a 77-yarder to Sam Drury. Kuehn hit his third straight PAT to make it 21-7 at the 9:23 mark.

But, the rest of the first half belonged to the visitors from Jefferson County.

Seckman gave Valle a taste of its own medicine when Ruble connected with Anthony Westervelt on an 81-yard scoring strike to make the score 21-13 with 8:24 to go before halftime.. The Jaguars missed their PAT.

The score stayed that way until the 1:30 mark when Ruble’s big first half continued. He hauled in a 13-yard touchdown pass and ran in the two-point conversion to tie the game 21-21 at halftime.

But, the fireworks were just getting started.

Seckman grabbed its first lead of the game early in the third quarter when, you guessed it, Ruble ran it in from 48 yards out. The PAT put the Jaguars up 28-21.

Valle responded at the 3:48 mark of the third quarter. Fallert and Drury hooked up for a second time, this one from six yards out, but Kuehn’s PAT to tie it failed and the Warriors trailed 28-27.

Almost before the hometown faithful could sit back down after their team’s heroics, Seckman scored again. Just seven seconds later, Ruble broke off another huge run, this time from 80 yards out. He was able to catch his breath enough to run in the two-point conversion to make it 36-27 heading into the fourth quarter.

But oh, what a quarter it would be for the 15-time State Champions!

With 9:45 remaining, Giesler scored his second TD on a two-yard run, but Chase Fallert’s run for the two-point conversion failed and it remained 36-33.

The Warriors regained the lead at the 7:01 mark when another Fallert connection, Chase to Grant from 15 yards out, put Valle up 39-36 after the PAT failed. Then the Warriors started gaining some separation less than two minutes later when Chase Fallert scored from one yard out. He then hit Drury for the two-point conversion to extend the lead to 47-36.

About two minutes after that score, Giesler found the endzone again on a 25-yard run. Kuehn was able to knock down the PAT to make it 54-36 with 3:09 to go in the game.

The Warrior defense put the finishing touches on the remarkable turnaround when Tim Okenfuss recovered a fumble and returned it 20 yards for the score with 2:17 left on the clock. Kuehn finished off his busy night by knocking home the PAT to make the final 61-36.

QB Chase Fallert had himself quite a season debut. He completed 16 of 32 passes for 365 yards with five touchdown passes and two interceptions. He also rushed for 54 yards and a score. That’s six total TDs for all of you keeping score at home.

Sam Drury led the receiving corps with seven catches for 146 yards and two touchdowns, while Rylan Fallert, Grant Fallert and Giesler each had a touchdown reception.

Giesler also led the way in the rushing department with 84 of the team’s 125 yards and a score.

Defensively, Carson Tucker had a team-high 13 tackles, including two behind the line of scrimmage. As a team, Valle had 14 tackles for loss, but the team’s lone sack belonged to Okenfuss, who also had the forced fumble, recovery and a TD.

Valle finished with 490 total yards. Seckman had 422. The Jaguars piled up 307 yards on the ground with 220 coming in the second half alone.

The Warriors collected 15 first downs compared to nine for Seckman, and Valle committed six penalties for 35 yards while the visitors had three for 25. In the plus/minus department, the Warriors turned it over twice, while Seckman coughed it up three times.

Valle (1-0) travels to Festus (0-1) Friday night. The Tigers lost their season opener to the Warrior’s crosstown rival Ste. Genevieve, so they will be looking for blood. Valle will have to be on their toes.