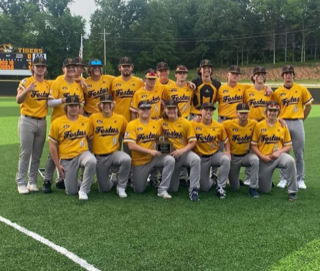 The Festus Tigers come from behind in the District Final against Windsor to claim the 2022 Class 5 Championship.

With the Class 5 District 1 Championship on the line, the Festus Tigers Varsity Baseball squad stepped up in a big way on Monday against the Windsor Owls. The long-time competitors faced off for a chance to head to the State Playoffs and, after a rocky start, the Tigers broke out with a vengeance late in the game to to take home their second consecutive title and keep their impressive season alive.

In the 4:30 tilt on Monday, May 23rd at Festus Stadium, the visiting team got off to an inauspicious start if you were cheering for the Tigers. The Owls banged out three runs in the second inning and held the Tigers scoreless through three frames to sit perched with a 3-0 lead.

Things would get worse before they got better, as Windsor tacked on an insurance run in the top of the fifth while continuing to blank the Tiger offense. Down 4-0 with the game well past the halfway point, it looked like doom and gloom for Festus. Then suddenly, the worm turned.

The Tiger bats woke up in the fifth and erupted for five runs en route to an incredible come-from-behind victory. After scratching and clawing to no avail, the offense did a 180 and wouldn’t be denied. There were two big blows that accounted for all the damage in the run column, as Connor McDonald and Kaleb Kennedy found their power strokes at just the right time. McDonald blasted a three-run homer and Kennedy popped a two-run shot to turn that 4-0 deficit into an eye-popping 5-4 lead.

The Tigers managed to keep the Owls off the board for the final two innings and held on to claim the District Championship. McDonald and Kennedy were responsible for all five runs and three of the four Festus hits on the day. Hayden Bates was the only other Tiger to record a hit in the contest. On the mound, Ian Brown got the start but didn’t have his best stuff, allowing three runs in just an inning and two thirds. Thankfully, co-ace Nate Moore was in peak form and closed out the remaining 5.1 innings by allowing one run on four hits and a walk with four Ks to claim the “W”.

The Tigers are now an impressive 25-8 on the season, and as District Champs, will get to play win-or-go-home ball until the State Final. Their first test will be on Saturday, May 28th at noon in an away game against Lutheran South. Every game is going to be clutch, nail-biting action from here on out so don’t miss a moment.

Check out every pitch, swing and dive on Ameritime Sports’ livestream page.