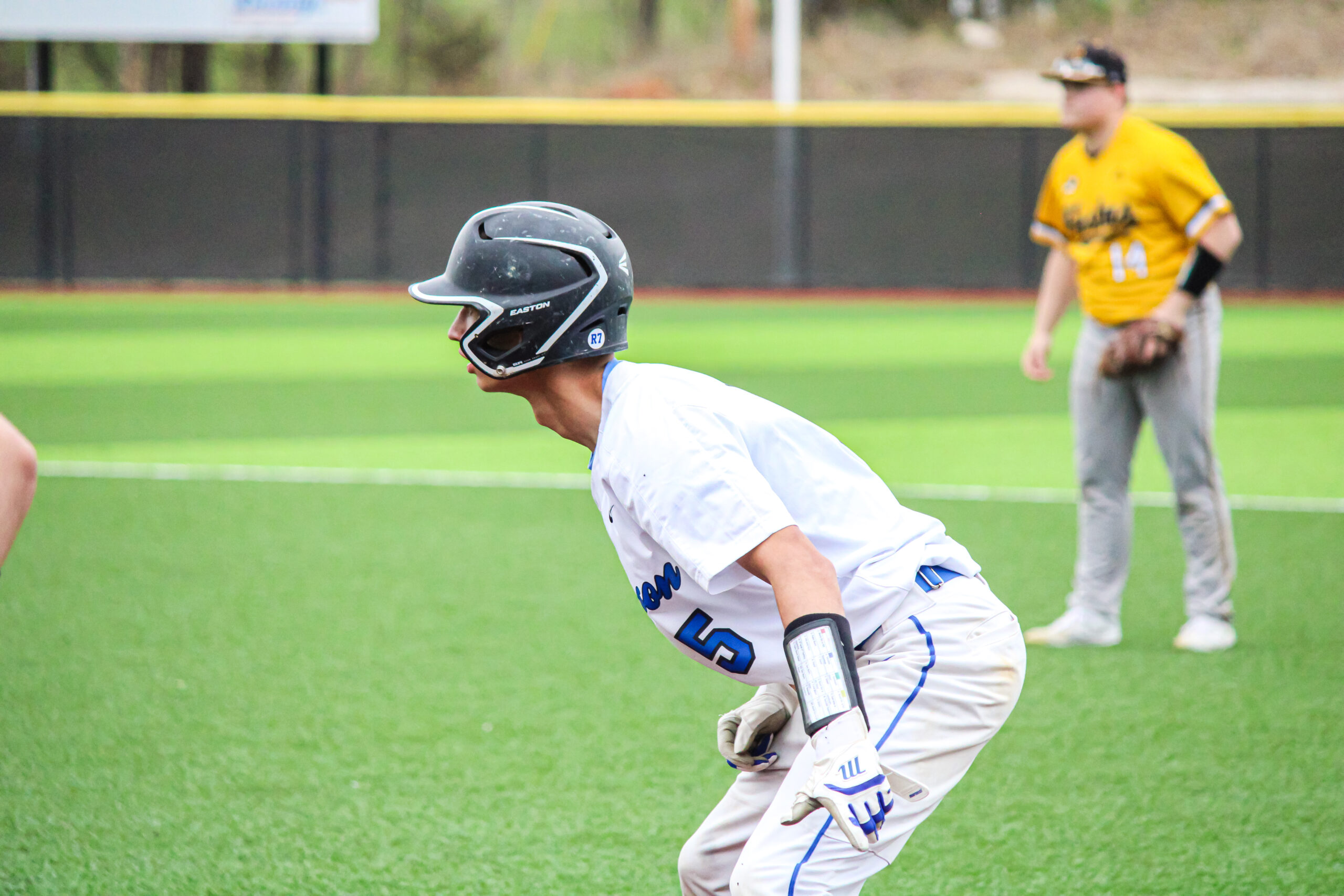 The now 5-7 Jefferson Varsity Baseball team lost three of four this past week, with the high point being a 6-3 win over Oak Ridge.

It was a challenging leg of the season for the Jefferson R7 Varsity Baseball team as the Blue Jays played four times, winning only once. The team opened the week with a 6-0 loss that hurt any momentum the team had carried over from the 10-run outing last Saturday.

The first game was on Tuesday, April 5th, as Jefferson traveled to Festus to take on the Tigers. Despite two errors, the Tigers held the Blue Jays down the entire game with quality pitching, only allowing two hits. The Tigers beat the Blue Jays 6-0.

Knowing his team could have had a better showing, Head Coach Robert Kuehnle said, “We made some small mistakes, and a team like Festus is going to make you hurt for that. All in all, our pitchers did give us a chance to win but we just didn’t seem to have it at the plate. We will use this as a building experience and go out tomorrow and try to get that win.”

Starting pitcher Max Schnitzler took the loss, pitching 2.1 innings allowing three runs, two earned, and giving up three walks, but did manage to strike out two. Sam Stokes and Gavin Theodoro each had one hit, providing the entirety of the Jefferson offense.

The next day, Jefferson hosted Kingston and fared a little better. After getting down three, the Blue Jays tied it 3-3 in the top of the fourth. However, the Blue Jay’s pitching couldn’t hold it and Kingston scored two in the bottom of the inning. That would be the way the game ended, as Kingston beat Jefferson 5-3.

There were a few more bright spots for the Jefferson bats though, as both Jack Hueter and Schnitzler each had two hits. Kole Williams and Nolan Naucke each earned one RBI on one hit apiece. On the mound, AJ Ciliberto took the loss, giving up five runs on eight hits, but did strike out three.

Thursday turned out to be the high point of the week as Jefferson traveled to take on Oak Ridge. The Blue Jays took the early lead, getting up 2-0 before giving up the three runs in the bottom of the fourth, making it a 3-2 game. However, in the top of the fifth, the Jays’ bats heated up and the team rallied for four runs to reclaim the lead 6-3. The pitching held Oak Ridge scoreless for the final two frames, and Jefferson took the victory 6-3.

Seeing a much better performance from his team, Kuehnle commented, “We played good enough to get the win. We had great pitching performances from Colton Richardson and Stokes. We also had three guys hit doubles at the plate. It was a good day and we hope to bring it tomorrow against St Vincent.”

It was a quality outing for both the pitching and hitting. Earning the win was Richardson, as he went four innings, giving up three runs, but also struck out four. He handed it off to Stokes who racked up five Ks in two innings but did not earn the save. Stokes got it done in the box as well, lacing two hits, including a double, while picking up three RBIs. Schnitzler was also clutch, delivering a two-run single when it counted.

After the victory on Thursday, the Blue Jays hosted St. Vincent and the celebration was cut short, as St. Vincent started the game by racking up four runs in the first. Jefferson scored one run in the bottom of the inning, but St. Vincent followed that up with another in the second, three in the third and one more in the fourth to deal the Blue Jays a 9-1 loss.

The pitching just wasn’t there. Cole Robinson lasted only one inning, giving up four runs on two hits. If anything positive was to be taken from the game, Stokes crushed a home run to give Jefferson its only run of the game.

After the long week, Jefferson fell to 5-7 and will have to have a short memory as the team is approaching the heart of the season. The Blue Jays have proved in the past they can be resilient, and this is a case where they will need to dig deep to wipe the slate clean and get rolling again.