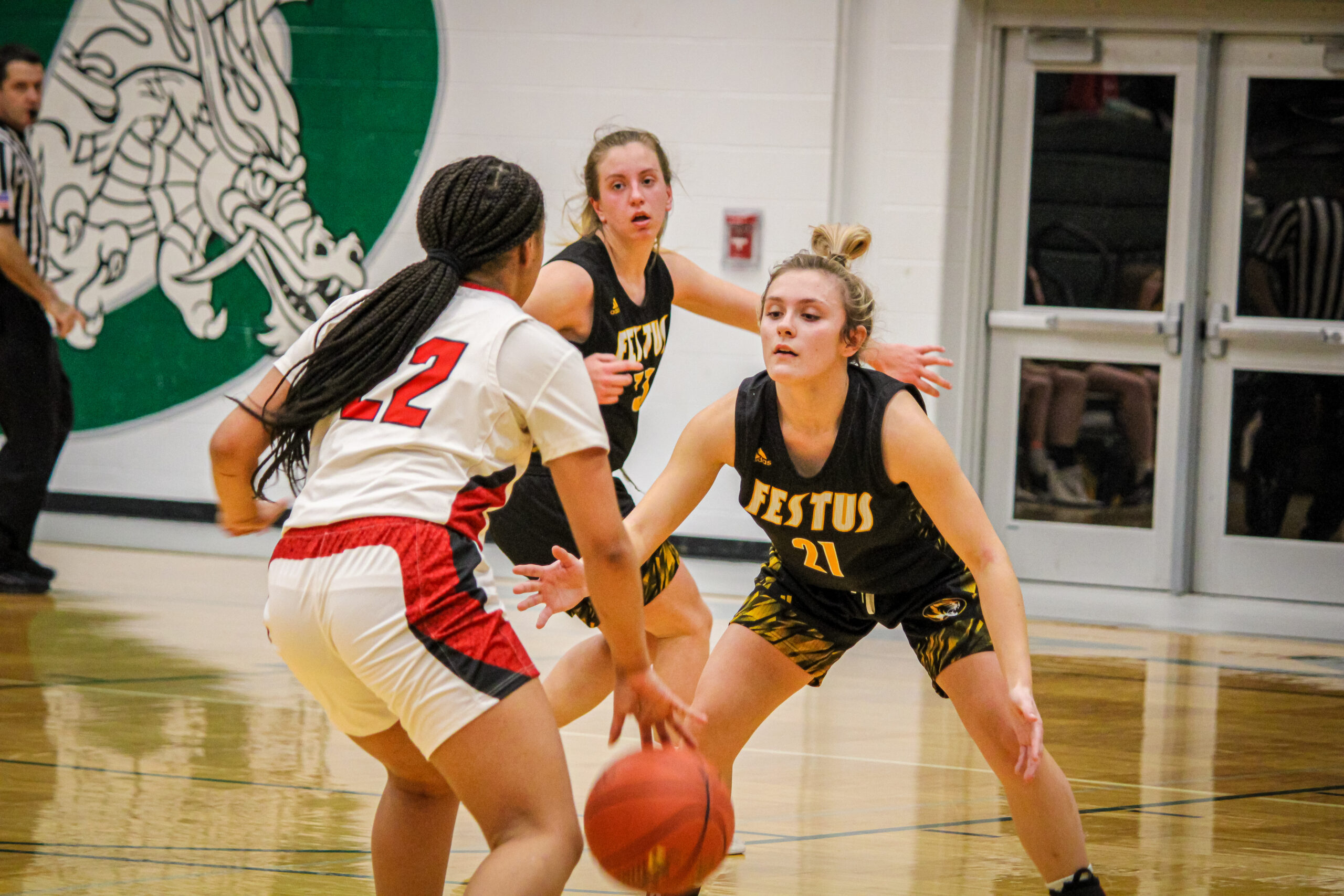 The Lady Tigers of Festus ran into trouble in the District Tournament and sadly saw their season end after a tough 71-42 loss to Sikeston.

The Festus Tigers Girls Varsity Basketball team had a remarkable season, but their 15-6 run that led up to districts was marred by a pair of tough losses that dropped them to 15-8 and effectively ended their year. A tough 54-37 defeat at Pacific spiraled into a 71-42 loss to Sikeston in the first round of Districts and put the Tigers to bed for the 2021-22 season. Despite the losses, this was a banner year for a gutsy group of girls that had their way with opponents for the majority of the season.

As for the games, the one against Pacific started out well enough with the Tigers going up 9-7 after the first quarter, but the trend of baskets being hard to come by would continue throughout the contest. Pacific broke through in the second with a 17-12 showing and suddenly Festus found themselves down 24-21 at the half.

The second slice of the game wouldn’t be any sweeter for the Tigers as Pacific won the third 16-11 before sealing the deal in the fourth with a 14-5 effort. Clock management and work at the free-throw line, which is usually a Festus strength, worked against them in this one as they fell 54-37 to leave a sour note in their mouths before the District Tournament.

Head Coach Steve McFarland commented on the loss saying, “A ton of turnovers and poor shooting, both from the line and the floor, spelled defeat tonight. Lily Knickman continued to shine on the inside as she was the only Tiger in double figures.”

The Festus Coach wasn’t wrong about Knickman, who stood out with a 13-point performance and added seven boards on top. Emily Holt was the other true standout in this one with 11 rebounds, six points and a pair of steals. It was a tough loss for such a talented group, and sadly, it wouldn’t get much better after this one.

Next the Tigers travelled to DeSoto and took on the Sikeston Bulldogs. This one did not go well from the start, as the Tigers quickly found themselves in a 24-7 hole after the first eight minutes. Things got worse in the second after a 16-10 showing from Sikeston and the Bulldogs owned a comfortable 40-17 lead at the break.

Festus fought back in the third, but still conceded the frame 20-18 and that was pretty much the end of the line. They lost the final quarter 11-7 and ultimately the game 71-42. Coach McFarland commented on the shocking loss after a long stretch of very little time on the court with, “We ran into a buzz saw tonight. Having only played one game in the last 17 days and limited practice time because of winter weather didn’t help us get off to a great start offensively, but the fact that Sikeston came out blistering the nets didn’t help.”

Josie Allen was the leading scorer for the Tigers with 15 points and managed four rebounds and three assists, while owning the only double-digit total for Festus. Holt again led in rebounds with seven in this one, and Kinsey Benack had a nice game with nine points and four boards.

This certainly wasn’t the ending the Tigers were hoping for, but that doesn’t take away from the incredibly successful season they enjoyed. All of these young ladies should feel proud of their accomplishments on the court this year and hopefully the returning starters use this as motivation to carve out a new page in the history book next season.