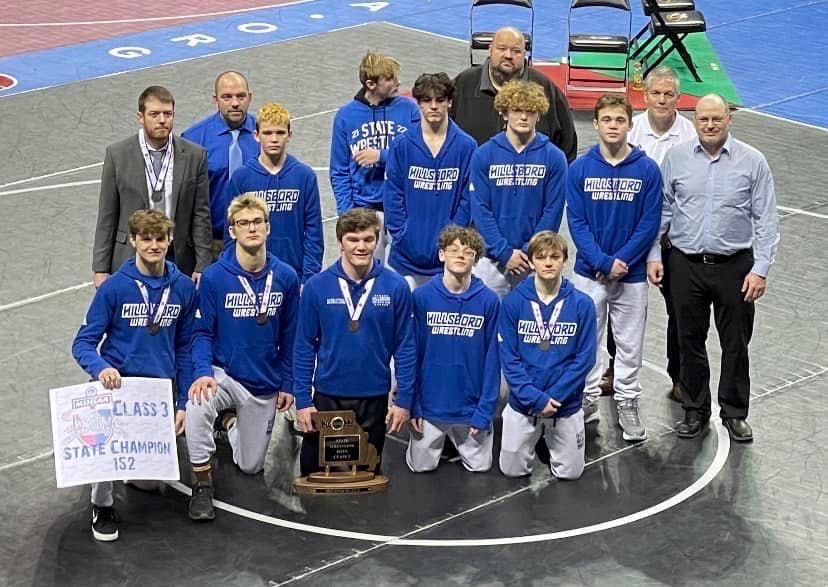 The Hawks entered 10 wrestlers into the final tournament, and five brought home hardware, which included two Bronze, two Silver and one Gold Medal.

The 2021-2022 season was incredibly successful for the Hillsboro Varsity Wrestling team. Back at the beginning, in October, the Hawks had their sites set on the biggest prize possible for high school wrestling, winning the State Championship. Last season, the team did remarkably well at the MO State Tournament, but due to a bit of inexperience, they came up short. However, their coaches knew that with a little more mat time, this team could achieve greatness.

In this past season, the team turned in many tremendous performances, the likes of which most wrestlers and coaches only dream. Hillsboro didn’t just win, they dominated, and they didn’t just dominate locally. The Hawks sought out worthy challengers across the Midwest to sharpen their skills against some of the toughest schools out there, so that they would be prepared for when it counted most, the MO State Tournament.

From February 18th through February 20th, the MO State Tournament took place at the Mizzou Arena, in Columbia, Missouri, and making their presence felt throughout Class 3, were the Hillsboro Hawks. By winning their District Tournament the previous weekend, the squad managed to advance an incredible 10 of 14 possible competitors into the State Tournament, where collectively, the team stood a strong chance of bringing home the State Championship plaque.

The first entrant for Hillsboro was Gabe Barnett who entered with a 31-11 record at the 106 lb. weight class. Barnett won his first match by pin, but lost in the quarterfinals, and the subsequent consolation match. He did, however, score four team points.

Gavin Alexander entered for the Hawks at 120 lbs. Having an impressive 33-3 record earned him a top seed, and he took advantage. Alexander pinned his first opponent, and then won the quarterfinals and semifinals by decision, but in the finals, he was narrowly defeated 3-2, to come home with the Silver Medal and 20 team points.

At 126 lbs., Jackson Tucker also had a high seed with a 44-4 record. Tucker won his first match by technical fall, and followed that with a major decision in the quarterfinals. He defeated his semifinal opponent 5-0, but unfortunately was knocked off 5-2 in the finals, to bring home the Silver Medal and 20.5 team points.

Nate Barnett came into the tournament with a 34-13 record at 138 lbs. Barnett won the first match, but lost the quarterfinals in a tight 4-2 decision. He went on to lose in the consolation round by tie-breaker. He contributed four team points.

At the 145 lb. weight class, Sam Richardson entered the tournament with a 42-6 record, and scored 22 team points after placing third. Richardson won his first match by pin, but lost his quarterfinal match, which pushed him into the consolation bracket. Richardson defeated his next three opponents by pin, including a 28 second pin in the consolation semifinals. He then went on to win his next match by sudden victory, earning him the Bronze Medal.

Evan Morris, who came into the weekend with a 40-9 record, earned 23.5 team points, and won his 152 lb. weight class. Morris won the first match by Technical Fall, 17-0. He won the next two matches by decision, but it took a sudden victory point in the finals for him to win the match, and bring home the Gold Medal.

Scoring four team points at the 160 lb. weight class was Eddie Hines. After winning his first match by pin, Hines then lost the next two, and was eliminated.

At 182 lbs. Dalton Litzsinger won his first two matches by decision, but lost in the semifinals. He went to the consolation bracket and pinned his first opponent and then won a Major Decision in the third place match to win the Bronze Medal, and add 18 team points.

Head Coach Matt Mitchell took some time to reflect on the season. He noted, “Each one of our wrestlers had the goal to win a MO State Championship. So, when you don’t reach that there is of course disappointment. As the coach though, I’m really proud of their efforts. They will look back on this one day as a great memory.” He continued, “Taking second place and bringing home the school’s second wrestling state plaque will always be special for the wrestlers, their families and the community.”

It was an outstanding performance by the entire team. When it was all said and done, Hillsboro brought home two Bronze, two Silver and one Gold Medal. Their efforts also garnered them 125 team points, earning them a second place finish as a team. Mitchell commented, “For now, they get to use second place as motivation for next season. We will only graduate two Seniors. We already have a handful of really good kids in our program at the Junior Varsity level as well that will be ready to step up next year. I’m looking forward to helping the team train and develop this offseason.”

While the Hawks certainly wanted to come out on the very top of the mountain, they must be proud of their efforts, and just as they did in the off season last year, there’s no doubt, they are already preparing for what’s next.