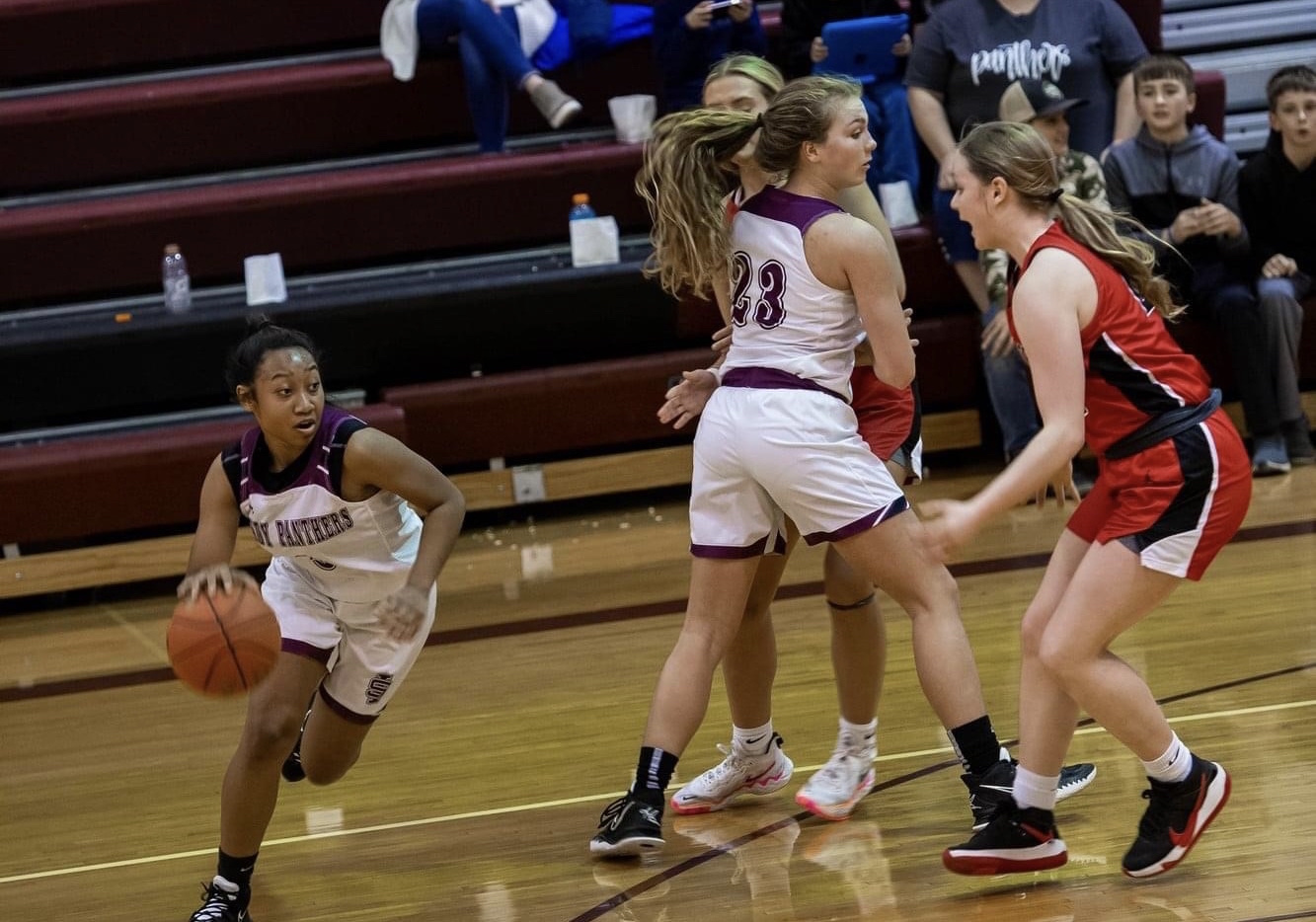 Lady Panthers Win a Pair Leading Up to District Tourney

The Lady Panthers of South Iron take down Neelyville before winning an overtime thriller against East Carter to finish up the regular season.

The South Iron Panthers Girls Varsity Basketball team had an interesting week leading up to the District Tournament, as they handled Neelyville with relative ease before winning an overtime thriller against an always tough East Carter team. The girls from Annapolis have now won a remarkable 10 games in a row and sit at 23-1 on the season.

The game against Neelyville saw the Panthers handle the Tigers from the jump. A 19-4 first quarter set the tone for a dominant first half even though South Iron was playing without Allecia Cornell due to injury. It didn’t show though, as they took down the second quarter 17-9 and established a more than comfortable 36-13 first-half lead.

The Tigers fought back hard in the second though as they won the third quarter battle 14-12 and then claimed the fourth as well 22-18. Despite the offensive barrage after halftime, the Panthers were able to hang on to the massive lead they built over the first 16 minutes of play. Execution at the free-throw line was key, as they nailed 18-of-23 shots from the line to secure the 66-49 victory.

Head Coach Lawrence Graves praised his girls’ effort, saying, “We started the game off really hot. As the game progressed, Neelyville started to push back and really cut into our lead. I’m really proud of our girls for handling that type of adversity so well. Being without Allecia, we were short handed, but our girls went out and played really well together on both ends.”

Enzley Dinkins broke out in this one with 21 points to lead all scorers and had six rebounds and three steals to boot. She was backed by Maddie Ayers (14), Anna Parker (13) and Megan Lashley (10) in the scoring department, and the team shot 42% overall while hitting 54% of their FGs inside the arc.

Next up was a much tougher challenge for the Lady Panthers, as they had to face the always-formidable East Carter Redbirds. They got a boost with Cornell returning from injury, but leveled back out quickly as they realized they would be without Lashley for this one. Coach Graves spoke to the scenario, “We knew East Carter was going to be a tough one. This was Allecia’s first game back from being injured and she’s still not 100%. Today we were without Megan so we were going to have the same struggle we’ve had for a few games now (being a lack of depth).”

The Redbirds came out of the gate firing in this one and earned themselves a thin 16-14 lead after the first quarter. South Iron battled back in the second with a 15-14 frame, but still found themselves down a point heading into the break. They evened the score after the third with a 15-14 showing, and then appeared to have the game in hand with the clock winding down in the final quarter, but East Carter hit a three-point buzzer-beater from half court that would send the game to overtime.

Thankfully, the Panthers handled the extra frame with suffocating defense and timely free throws and were able to pull out the 61-57 win after going on a 6-2 run in OT. Coach Graves broke it down for us with, “East Carter is always long and athletic, but rather than changing our game plan, we just went out and played our way. Sure we weren’t able to pressure the ball as much as we would normally have, but we still pressured the ball. This game was back and forth the whole way. We had a three point lead leading up to the final buzzer in regulation when Brooklyn Kirby (EC) hit a long 3 just across the half line to put the game into overtime. In overtime, our pressure paid off giving us a layup. We were able to get some timely free throws as well to ice the game.”

It was Dinkins again leading the charge in this one with a team-high 22 points and seven rebounds. Ayers had 16 and seven steals to pace the defense while Parker chipped in with 11 points after hitting 3-of-7 shots from downtown. A less than full strength Cornell managed four points and three rebounds in her return from injury.

This game was a big one from a momentum standpoint and certainly a confidence booster with districts just around the corner. Coach Graves offered his final thoughts, saying, “We couldn’t have asked for a better game right before the District Tournament. You want to get tested and be sharp, and tonight we got just that.”

The ladies of Annapolis will travel to Bunker on Monday to kick off the District Tourney. Tipoff is as 6pm. Good luck Panthers!

Lady Panthers Win a Pair Leading Up to District Tourney