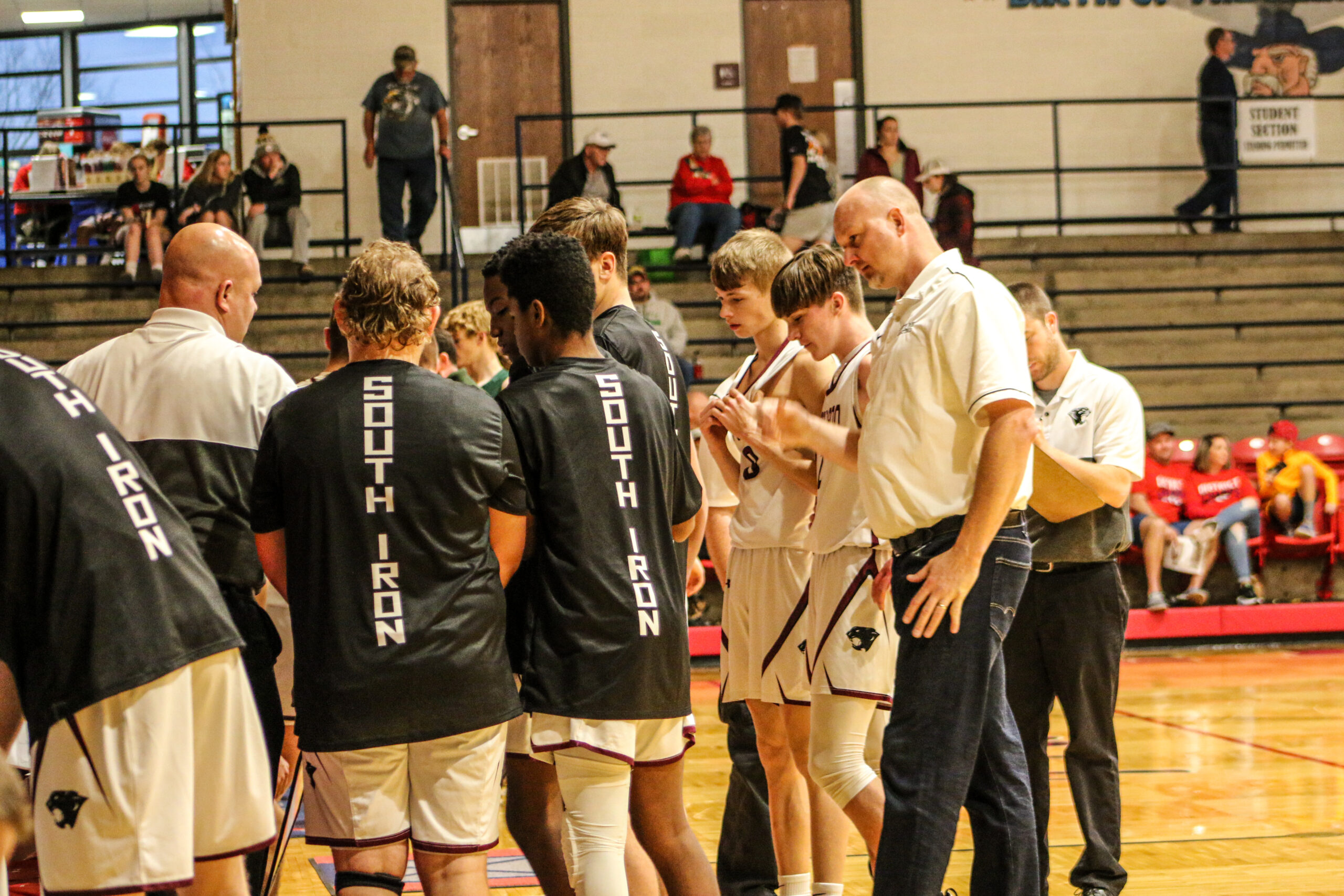 The South Iron Panthers win another Conference Championship in a wild week of basketball that saw a pair of big wins and a tough loss.

The South Iron Panthers had a wild week as the Boys Varsity Basketball squad took down Eminence and Lesterville before falling to Class 4 powerhouse Fatima despite a valiant effort. The win against Lesterville came on Senior Night and secured yet another Black River League Conference Championship for South Iron.

The Panthers kicked off their busy week by traveling to Eminence and taking on the Redwings. Things started out tight with a 15-13 first quarter in favor of South Iron, but the Panthers turned on the jets in the second. They dominated the frame 22-9 and suddenly enjoyed a 37-21 lead heading into the halftime break.

In the third quarter, the Panthers came out like a team possessed. Their suffocating defense took over and the offensive train kept rolling right along with it, as they dominated the frame 22-8. Then in the fourth they ran out the clock while keeping the defensive pressure on in spades with an 8-1 quarter that led to an easy 67-32 victory.

Drenin Dinkins was the centerpiece in this one as he racked up a double-double with 26 points and ten rebounds. He also had four assists and drained 4-of-9 shots from three-point land, while DJ Prater and Champ McMurry backed him up with 13 points apiece to round out the bulk of the scoring.

Next up was the Friday tilt against Lesterville, with the Panthers hosting the Bearcats on Senior Night for a chance to clinch the Conference Championship. This one was a no-doubter and from the opening whistle it was likely apparent to everyone in the building that the Panthers would snatch another conference title while the three Seniors shined.

South Iron went up 25-13 after the first quarter and then poured it on once again in the second with a 24-16 frame that afforded the Panthers a gaudy 49-29 halftime lead. Head Coach Dusty Dinkins touched on the dominant effort, saying, “Great night to honor our Seniors. The entire team did a great job of competing and everyone saw action.”

There would be no surprises in the second half, as The Panthers dumped another 24 on the Bearcats in the third and surrendered just nine. The final quarter was much more calm as the Panthers eased up on the attack and brought in the subs. South Iron didn’t bend though as they took the quarter 10-5 and the game 83-43.

The win gave the Panthers yet another Conference Title, and for the three Seniors, Drenin Dinkins, Prater and McMurry, it was their fourth consecutive. These three young men don’t know what it’s like to not win the conference in their High School careers, and they certainly stole the show in this one.

Drenin led the way again with 24 points, but had McMurry nipping at his heels with 22, and these two were responsible for four of the six Panther three-pointers. Prater was a monster on the boards, as he led all players with 16 and also chipped in with 13 points. It was a special night for the South Iron faithful, but especially for these Senior champions.

The Panthers then followed up that effort with a daunting task, as they hosted Class 4 giant Fatima. They couldn’t pull off the victory, but certainly held their own against one of their toughest ever opponents. Coach Dinkins spoke to the success that the Comets are known for, saying, “Fatima is one of the top Class 4 teams in MO. They have played some of the top teams in the state….Kickapoo, Blair Oaks, Father Tolten and Helias Catholic. They lost to all of those schools by 8 points or less.”

The game didn’t start out the way the Panthers drew it up, and they found themselves in a 20-5 first quarter hole. They did a solid job of bouncing back a bit in the second though with a 13-11 effort that favored the Comets. Still they had a ways to go facing a 33-16 halftime deficit.

Coach Dinkins must have had some choice words for the boys during the break though, because the Panthers came out gunning in the third. They won the quarter 18-16 and kept up the intensity all the way to the final whistle. They won the fourth-quarter battle as well (19-14), and even got to within three points at one time, but the hill was too steep to climb. They dropped the game 63-56, but showed incredible moxie and resilience in the second half.

Coach Dinkins was very pleased with the bounce-back effort after the break, saying, “We didn’t start the game with the intensity and focus we hoped for. We dug ourselves a huge hole but saw a better second quarter! We did an outstanding job of coming out in the second half with our intensity. We are really proud of our resolve and ability to make a great push in the 4th quarter. At one point late in the 4th we cut Fatima’s lead to 3 points but we couldn’t get any closer. We weren’t happy with the result of the game but are excited about our second half effort! We showed some toughness, grit, and determination. Overall, this was a great opponent and experience for us heading into Districts in a little over a week.”

Prater had a monster game in this one, racking up a double-double on 21 points and 16 rebounds. Drenin Dinkins lead the Panthers in scoring with 22 points, but struggled a bit from beyond the arc, making just two of his 11 attempts. Still, it was a solid overall effort by South Iron and a bold challenge to take on such a formidable opponent.

The Panthers now sit at 21-3 on the season and still have lofty aspirations of repeating as State Champions this year. They’ll face another couple of tough tests next week as they take on Steelville and Festus before the district playoffs begin.