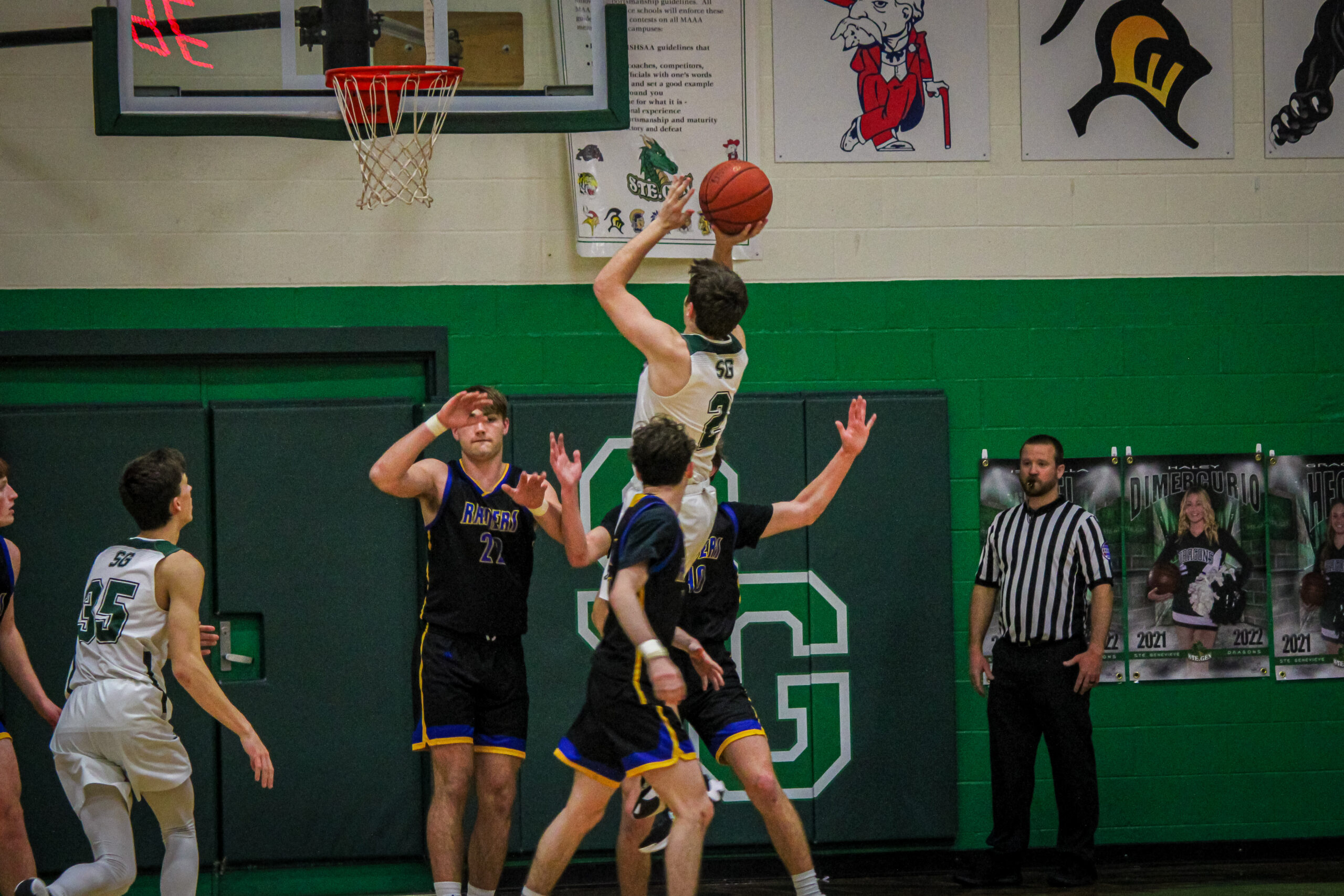 A blow-out and a comeback earn the Dragons of Ste. Gen a two-win week as the Boys Varsity Basketball team improves to 10-5.

With the regular season winding down, every game counts towards that ever important final record, which helps determine the playoff picture, making it an especially nice double-win week for the Ste. Genevieve High School Varsity Basketball Team. The Dragons were able to knock off both DeSoto and North County in back-to-back games last week, which included a blowout, and a heart-pounding comeback victory.

The first game of the week was on Tuesday, January 18th, against the Dragons of DeSoto. This one got out of hand quickly as Ste. Gen dominated the first quarter, racking up 22 points, while holding DeSoto to only five. The second frame looked almost identical as Ste. Gen tallied another 23 to DeSoto’s seven, making it a 45-12 game at halftime.

The second half was more of the same as Ste. Gen successfully held their foes down and scored basically at will, despite taking their foot off the gas significantly in the fourth quarter. The final score of the game saw Ste. Gen winning by an incredible 43-point margin, 72-29.

This one was a stat keepers dream as almost everyone earned points. Leading the team in scoring was Rudy Flieg who had 24 points as well as seven rebounds. Aiden Boyer was next as he added another 14 to go along with 10 boards. Wesley Basler was just behind him, putting up 13 more.

Head Coach Rob Coleman commented on the win, and said, “Our guys came out and started very well. Our defense was really good, holding them to five points in the first quarter and twelve points in the first half. On the offensive side, we executed very well. Everyone had at least one-assist in the game. I was very proud of how they shared the ball and executed on the offensive end.”

The second game of the week, on Friday, January 21st, against North County, was a different story. The Raiders jumped out to an early six-point first-quarter lead, 18-12. Then the Dragons came back in the second quarter and managed to cut the lead, countering with 15 to the Raiders’ 11, making it a two-point ballgame at the halfway point, 29-27.

Both the Raiders and the Dragons fought for the lead, but after three quarters, North County remained on top 46-41. This one was neck-and-neck all the way to the finish line, but the Dragons caught fire late in the final quarter as the Raiders faltered and blew their five-point lead. Ste. Gen scored an astonishing 21 points in the fourth, as North County fell apart, only able to notch 12, giving Ste. Gen the comeback victory 62-58.

This game was the Boyer show, as he carried the load with 24 points, including two from beyond the arc. Flieg also showed up strong and added 17 to the total. Ricky Hunter also contributed 14 more.

Coach Coleman again was thrilled with his squad’s performance, and commented, “Our guys did a great job of handling their full-court pressure. Early on we didn’t shoot the ball well, especially from the outside, but our guys kept their composure, kept plugging away and made a run in the fourth quarter to come away with a win. We hit our free-throws, which made a huge difference. This was a good conference win against a really good program.”

With these two victories, the Dragons improved to 10-5 on the season, which includes an even more critical 4-2 league record. Ste. Gen has no time to relax as the season presses on with two more important games this coming week. The St. Vincent Indians come to town on Tuesday, January 25th, followed by the Park Hills Central Rebels on Friday, January 28th. Let’s go Dragons!