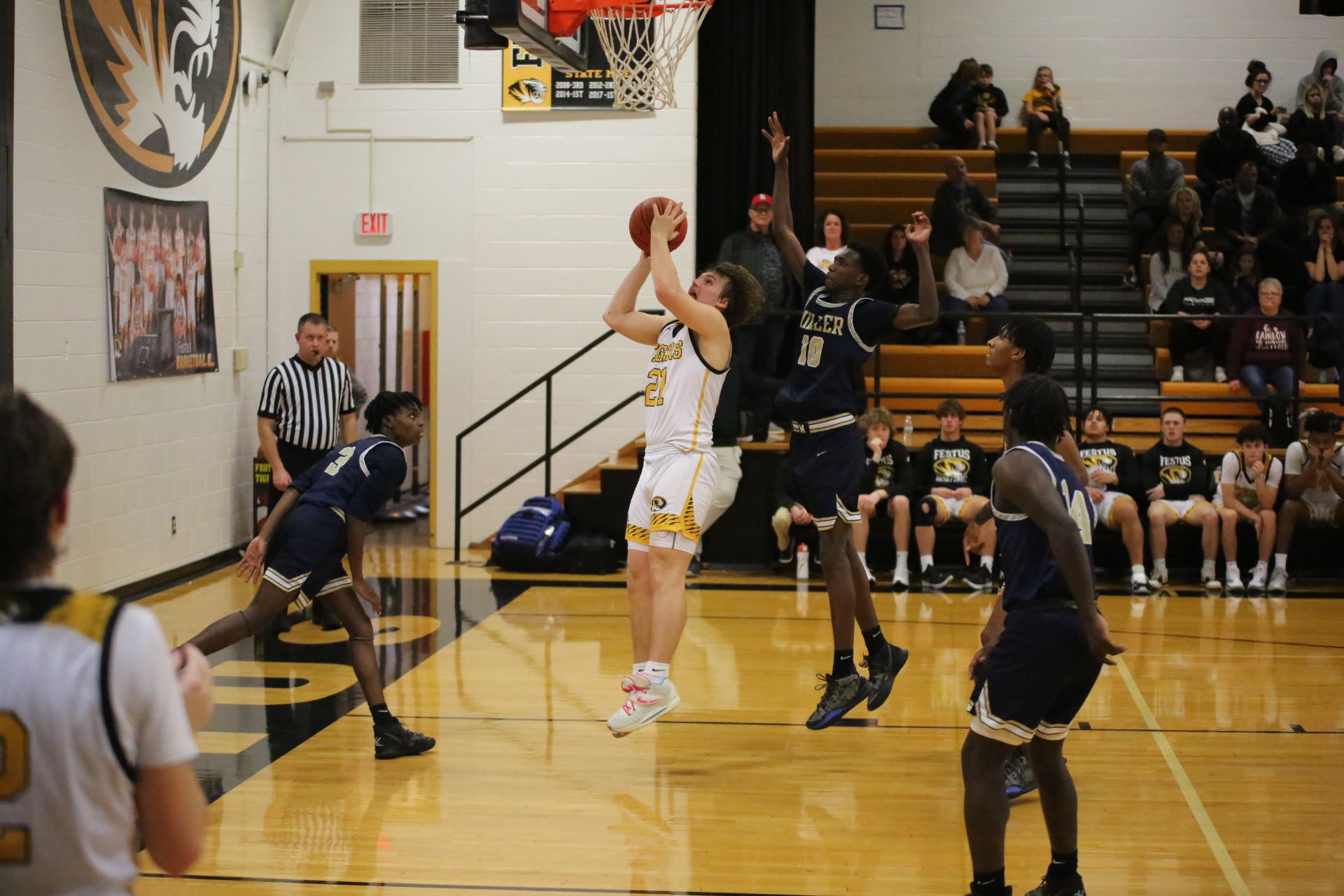 The Festus Tigers Boys Varsity Basketball team drops a tough one to MCA, but rebounds big time against Perryville to move to 12-4.

The Tigers of Festus had been cruising with three straight wins, but the Boys Varsity Basketball team ran into a buzzsaw in the form of Miller Career Academy on Tuesday. The Tigers dropped that one 80-52, but quickly rebounded three days later as they traveled to Perryville to take on the Pirates, and made them pay with 71-27 victory.

As for the game against the MCA Phoenix, the Tigers hung in admirably in the first half against the juggernaut. They trailed just 17-14 after the first quarter, and then put up 19 against the Phoenix’s 27, giving them an uphill, but manageable, battle with a 44-33 halftime score. Head Coach Jason Therrell bluntly stated, “It was a closer game than score indicated.”

The second half, however, was not so close, as the Tigers went down 15-11 in the third quarter and found themselves in a 59-44 hole. It wasn’t an unthinkable deficit to surmount, but the Phoenix didn’t take their foot off the gas in the final eight minutes. They poured in 21 more in the fourth quarter and held the Tigers to just eight, resulting in the lopsided 80-52 loss.

Cole Rickermann and Eric Ruess were the offensive standouts for Festus, triggering memories of the Tigers’ football season. Rickermann led the team with 19 points and had a pair of big three-pointers, while Ruess had 14 points, making five shots from the field. As for the overall effort, Coach Therrell simply stated, “We need to learn from it and move on.”

Move on they did, as the Tigers took all the frustration from that loss and turned it against Perryville. The Pirates would be denied any treasure in this one as Festus came out roaring in the first. They doubled up Perryville with a 14-7 first quarter before unloading in the second with a massive 29-4 advantage. That made it a 43-11 first half and essentially eliminated any hope of the Pirates keeping their ship afloat.

The second half wouldn’t offer any respite for Perryville, as the Tigers tickled the twine for another 16 points in the third and kept the Pirates in check with a 10-spot. Festus coasted in the fourth and used clock management plus solid defending to put up a 12-6 frame that led to the dominant 71-27 victory. Coach Therrell praised his guys for spreading out the offense across the board, saying, “We had eight guys score and got great energy from our team. A lot of guys contributed and we shared the ball well as a team.”

The Tigers had five players in double digits, hit five three-pointers and made 14-of-17 shots from the charity stripe to help close out the one-sided victory. Rickermann and Arhmad Branch led the team with 12 points apiece, while Ruess had 11 and Collin Weinhaus and Damarion Anderson rounded out the double-digit scorers with 10 each.

This was a total team effort and made an impact statement, saying that just because this team dropped a tough one, they aren’t to be taken lightly. The Tigers are now 12-4 on the season and look to put back-to-back wins together as they host Farmington next Tuesday.