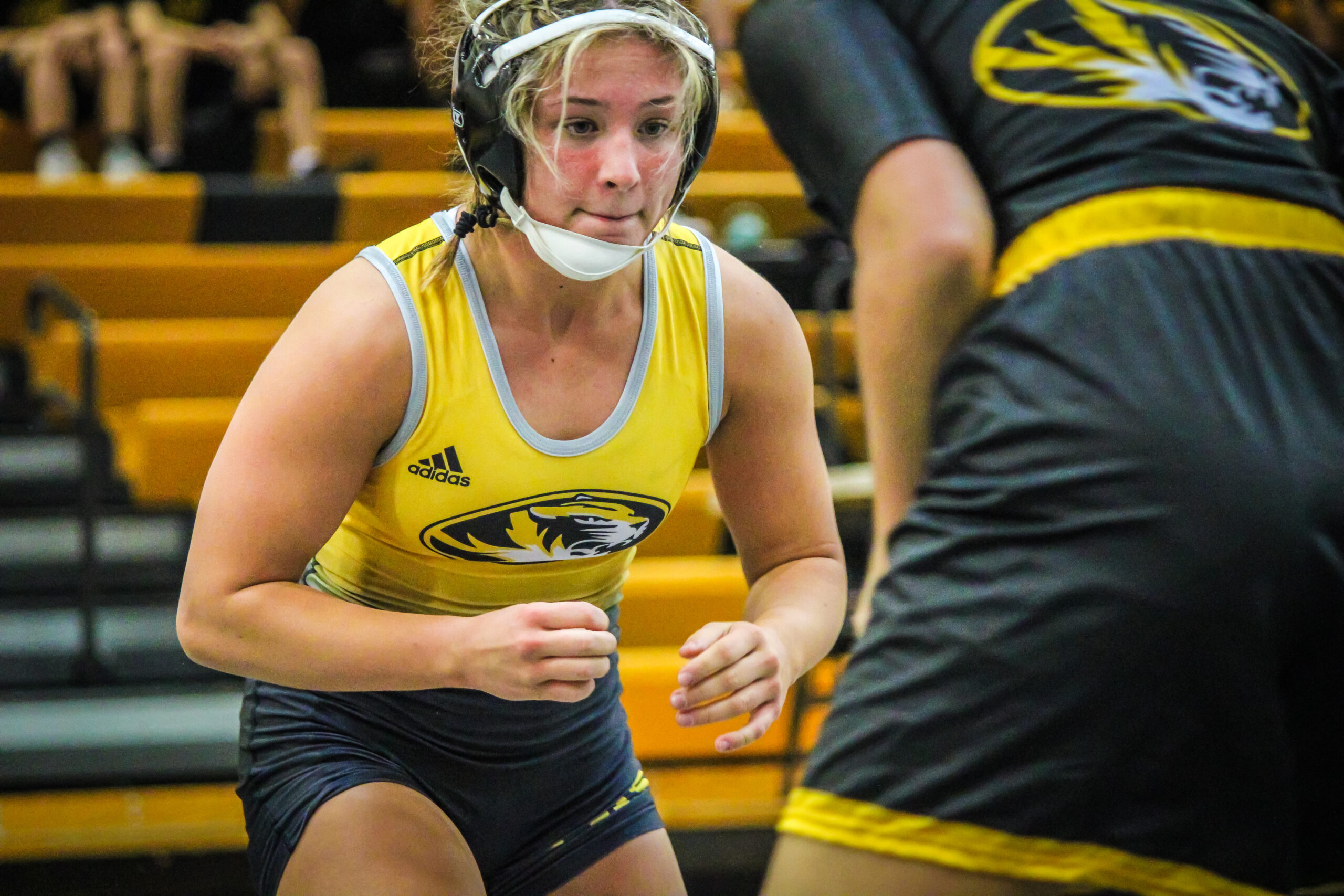 As the season concludes, these nine individual wrestlers are making waves for Festus as each look to etch their name in the record books.

It’s been a rough season for the Festus Varsity Wrestling team as they’ve struggled to fill out enough weight classes to earn the points necessary to win duals. Nonetheless, these Tiger grapplers are still competitive in every match in hopes of achieving success individually. All of these wrestlers have been putting in countless hours of hard work, and are hoping to fare well enough in the district tournament to extend their season all the way to the MO State Championship podium.

First up, Lauren Mills is a 125 lb. wrestler that currently is sporting an unblemished 20-0 record. In every match, she has earned either a pin or a technical fall (amassing at least a 15 point differential causing an automatic end to the match) every time she has stepped foot on the mat. Mills is a hard worker in the wrestling room, and as such has earned herself a fourth place ranking in the State of Missouri. She has won the Cape Central Tiger Classic, the Affton Girls Tournament and the Liberty Wentzville Tournament, and she’s only a Junior!

Another female wrestler that is making waves for Festus is Kirsten Klein at 110 lbs. She is currently 12-1 and is ranked seventh in the State. Klein has won the Park Hills Central Tournament and the Liberty Wentzville Tournament. In her Senior year, this is Klein’s last opportunity to earn the coveted Gold Medal in the MO State Tournament, and she’ll stop at nothing to achieve her goal.

At 100 lbs. and tearing up the competition, LeeAnn Dobbs has an incredible 14-1 record. She has won the Liberty Wentzville Tournament, the Affton Tournament, the Cape Central Tiger Classic Tournament and the Park Hills Central Tournament. Look for Dobbs to continue her domination as the season rolls on, and don’t be surprised to see her on the podium as well.

With all of those impressive feats from her teammates, it would be easy to overlook Sarah Gazaway. However, that would be a mistake as she is another tough Tiger grappler, and is currently 15-8 on the season wrestling at 105 lbs. According to Head Coach Jarad Sheppard, “She wrestles hard and is improving every week.” She could be a dark horse come tournament time.

On the boys side, Austin Neff at 126 lbs. has put together a dominant 13-2 season thus far. He has taken second at the Cape Central Tiger Classic, took first at the Affton Tournament and went 5-0 at the Hillsboro Dual Tournament. As a Senior, Neff is as a tough as they come, and wants nothing more than have his hand raised one last time in his final match.

Next up, only a Sophomore, Blake Sexton is currently 25-10 on the season at 138 lbs. and has medaled at the Cape Central Tiger Classic, the Liberty Wentzville Tournament and the Affton Tournament. He is looking to score some big upsets in the district tournament.

Another Sophomore, Bobby Buehre is steamrolling the competition and is 21-4 on the season at 145 lbs. He took first at both the Affton and Park Hills Central Tournament and fifth at the Liberty Wentzville Tournament. Buehre is a complete wrestler and strives to improve every match.

The last Sophomore stud is Lucas Mercurio. He is 19-9 and took second at the Park Hills Central Tournament and first at the Affton Tournament. Mercurio is a dangerous grappler and can put an opponent on their back in the blink of an eye. He’ll be one to watch as the season winds down.

Finally on the list is Freshman sensation Peyton Shaver who is currently blitzing his foes and is 30-3 on the season at 160 lbs. He won the Park Hills Central Tournament, took fifth at the Liberty Wentzville Tournament, and won it all at the Affton Tournament. The sky is the limit for Shaver who will undoubtedly draw attention during his high school reign.

Like many teams this season, however, Fetus has also been battling illnesses and injuries, and hasn’t been able to compete as often as Coach Sheppard would have preferred. Nonetheless, the schedule the rest of the way is no time to coast. The Girls team will compete at the Iron Jay Tournament on Friday, January 21st, and the Boys team will enter the Pacific Invitational on Saturday, January 22nd. Go get ‘em Tigers!