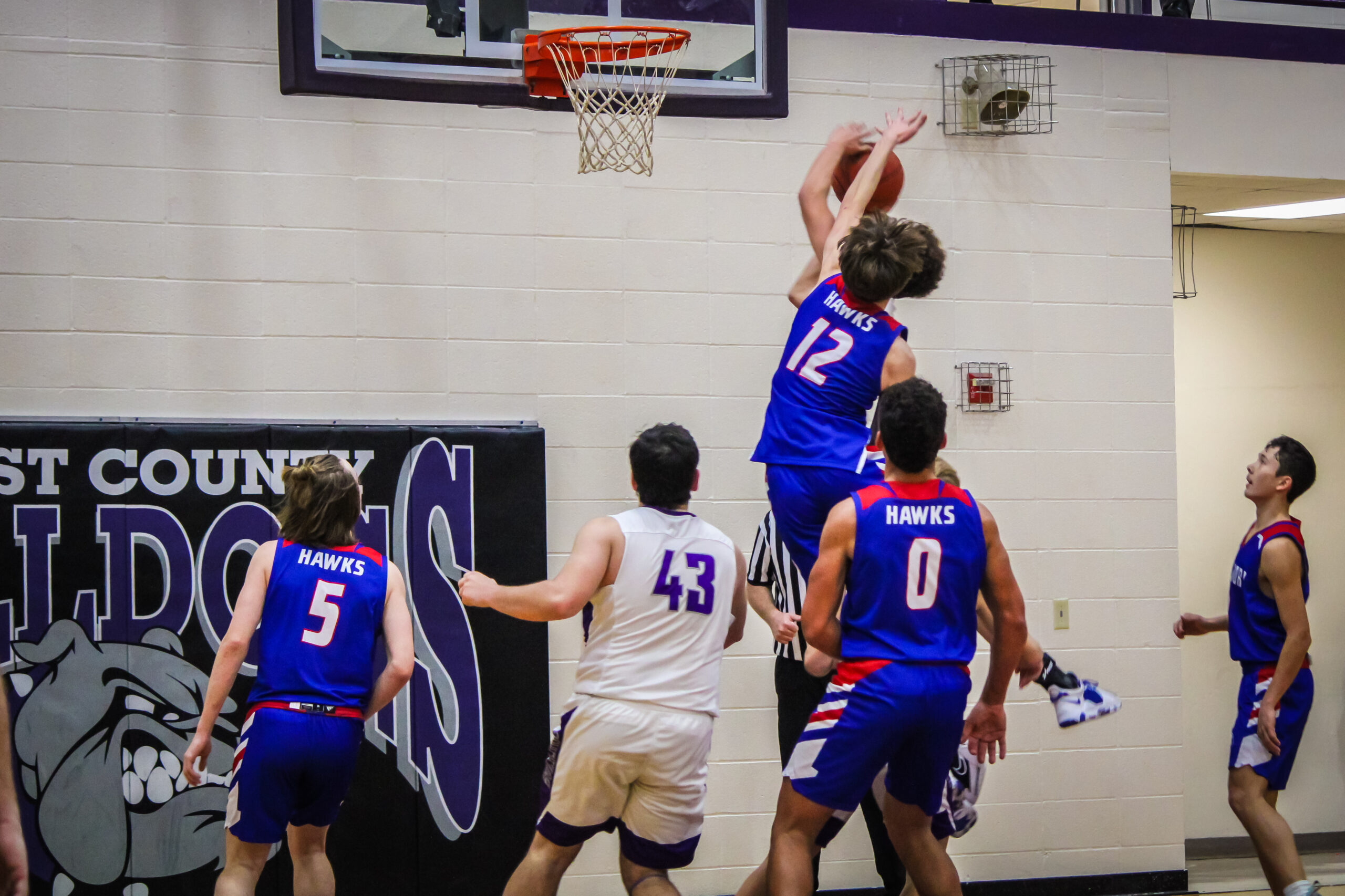 The Hillsboro Hawks Boys Varsity Basketball team mops up West County, but falls to the rival Tigers in Friday’s 64-53 loss at home.

The Hillsboro Hawks Boys Varsity Basketball team travelled to Leadwood on Wednesday to take on West County and downed their foes 63-39 to win their fifth straight. Their fortunes changed however on Friday as they hosted their crosstown rivals the Festus Tigers, and fell 64-53 after a fourth quarter collapse.

The game against West County started out as a tight one on Wednesday, as the Hawks clung to a narrow 9-7 lead after the first quarter. Some quick adjustments however got their offense back in sync as they put up 16 in the second quarter and held the Bulldogs to just 11, giving them a comfortable 25-18 lead at the break.

The Hawks didn’t rest on their laurels though, and poured it on in the second half. A 22-9 third quarter advantage pretty much sealed the win, but Hillsboro decided to lay it on thick in the final frame as well. A 16-12 fourth quarter gave them the convincing 63-39 win and bumped their record to 10-4 after their fifth straight win.

Noah Holland went off in this one as he led all scores with 23 points and chipped in with five rebounds, four assists and three steals to boot. Kyle Phipps and Luka Pool were the other big offensive threats with 14 and 13 points, respectively, and Kieren Jones was big in the paint with a team-high 11 rebounds.

Riding high after their fifth straight win, the Hawks got a bit of a reality check just two days later as they hosted the rival Tigers. This one started out tighter than sailer’s knot, but didn’t end well. The first quarter saw the Hawks barely edged out 15-14, before a similar second frame, where they were down 18-17, led to a 33-31 halftime deficit.

The Hawks came out recharged after the break though and put up their best offensive quarter with 20 points. They held Festus to 18 and suddenly found themselves staring down the barrel of a tie game heading into the final eight minutes. Sadly, that was when the wheels fell off.

The Tigers finally contained Phipps, who was up to 26 points, and it spelled disaster for the Hawks, as Festus held them to just one bucket in the fourth. The Tigers came through with 13 and easily cruised to the 64-53 bragging rights victory.

Despite the loss, Phipps was incredible with 26 to lead all scorers, and Holland had another banner game with 16 points, five boards and four steals. Jones once again led the team in rebounding with 10.

It was a solid effort, save the final frame, but the Hawks still had a strong week and own an impressive 10-5 record on the year. They will look to get back into the win column next Tuesday as they host St. Clair. Tip off is at 7pm.