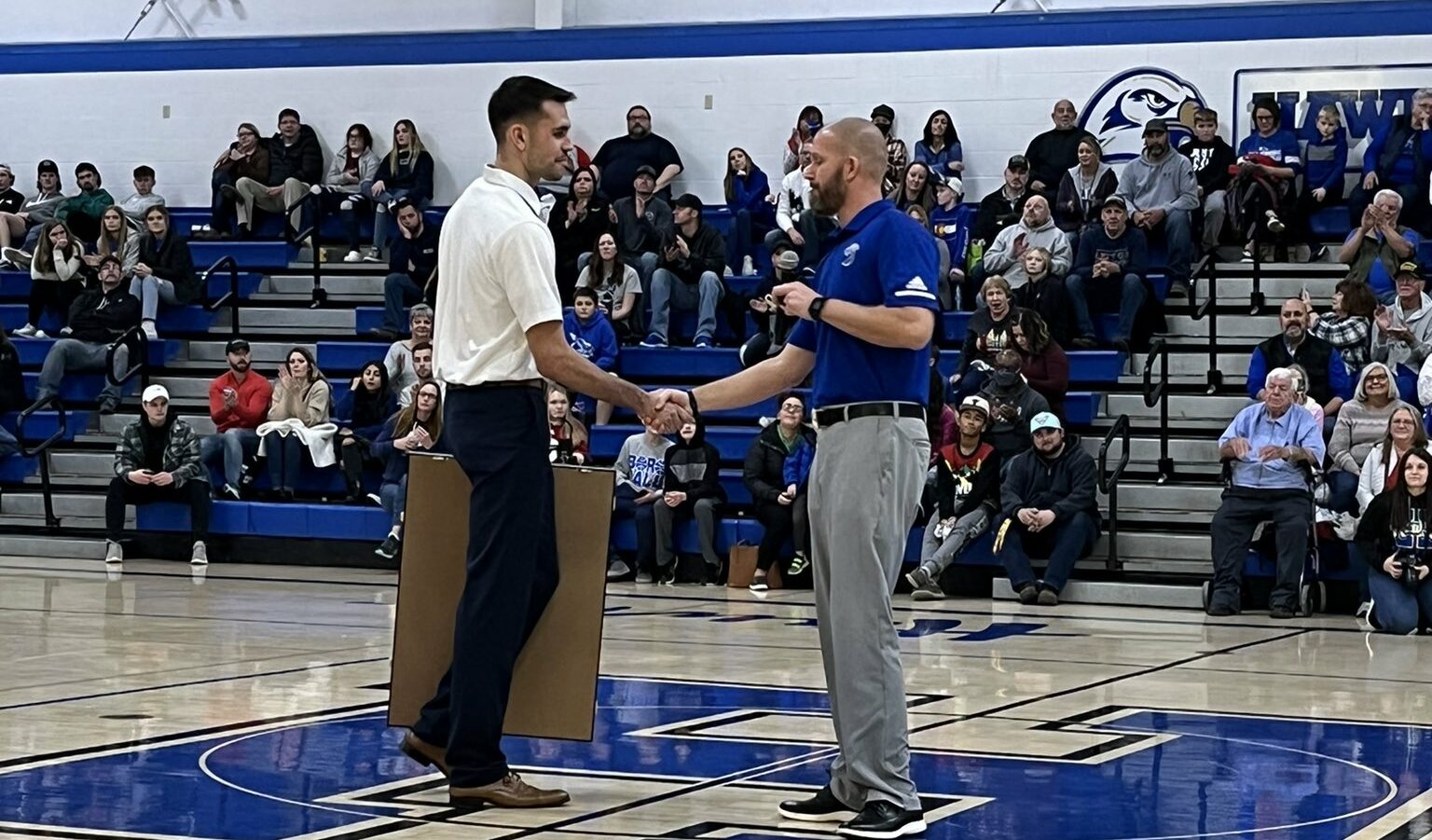 The Hillsboro Hawks Boys Varsity Basketball team retires Gavin Pinkley’s jersey and rewards him with a big win over St. Pius just before the Christmas break.

In a special home ceremony, the Hillsboro Hawks Boys Varsity Basketball team got to retire the jersey of one of their all time greats, as they honored Gavin Pinkley. The now standout for the University of Central Missouri was a beast at Hillsboro and was justly praised in their game against St. Pius on Tuesday.

As for the team, they continued their back-and-forth trend this season as they fell to the Windsor Owls, but quickly rebounded to defeat the St. Pius X Lancers. They now have the luxury of coming off of a win heading into the annual Park Hills Christmas Tournament.

Despite nature dictating them being the smaller bird, the Owls have had the Hawks’ number this year. The 4-3 Hillsboro club has Windsor to thank for two of its three losses on the season, and this last one wasn’t any easier to stomach than the first as the Hawks fell 58-47.

It was actually a pretty close game until the wheels came off in the fourth quarter. The Owls jumped out to an early 14-10 lead in the first, but the Hawks rebounded in the second and put up 15, which would tie the score at 25 headed into the break. Hillsboro then came out firing in the third with a 17-14 advantage, but the Owls went hunting in the fourth. They poured in 19 and held the Hawks to just five to cruise to their second straight victory over their divisional opponent.

Kyle Phipps once again led the way for the Hawks in scoring with 14 points, while Noah Holland and Luka Pool were close behind with ten points apiece. Kieren Jones was the most impressive on the glass with eight rebounds to lead the team, and he chipped in seven points as well.

The game against St. Pius was of a different sort. The Hawks pulled off identical 11-9, 11-9 quarters to start the game and went into the break with a tight, but confident 22-18 lead. They kept the momentum flowing in the third as they put up another 14 and held the Lancers to just seven. That set them up for a seemingly comfortable fourth quarter with a 36-25 lead, but St. Pius had other plans. The Lancers exploded for 17 points and looked like they were going to steal a win, but the Hawks held strong, put up nine of their own and eked out the 45-42 victory.

Phipps was huge in this one as he led all scorers with 20 points, going 9-of-16 from the field. Holland had a complete game with 12 points, four rebounds and a pair of assists, and Jones again led the team in boards with eight, chipping in four points to boot.

The win, lose, win, lose, rinse, repeat method for the Hawks this season has to be frustrating, but they are in a perfect spot to use the momentum from this last victory. They need to take that positive energy from a clutch win and pour it into the Christmas Tournament. It would be a heck of way to get their first set of back to back wins.