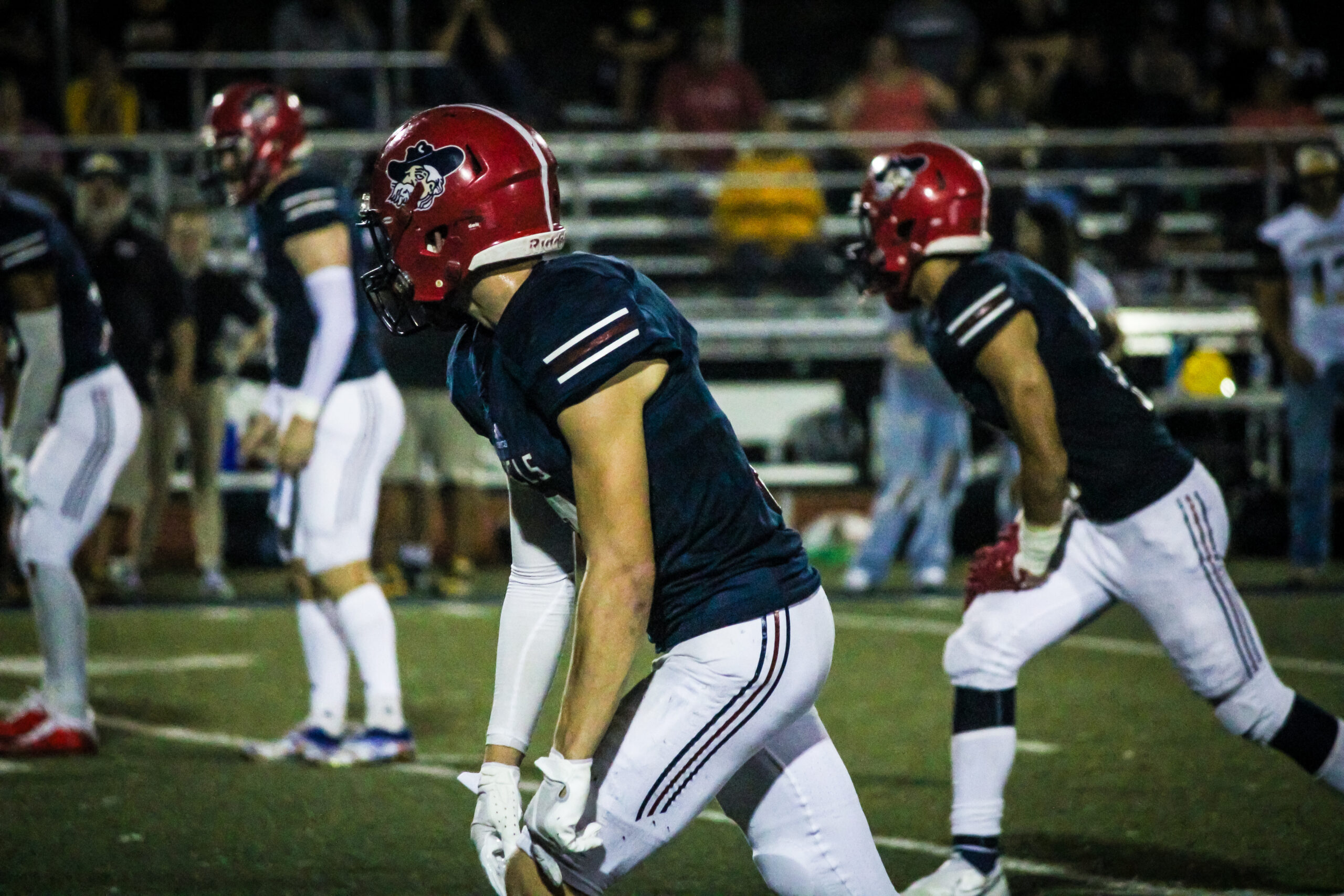 The Park Hills Central Rebels Varsity Football team runs over the Farmington Knights by the score of 49-14 to finish on a seven game win streak, earning the number one seed in their district.

Share
Tweet
Share
Share
Email
Comments
The Park Hills Central Varsity Football team is definitely hot! After defeating the Farmington Knights 49-14 last Friday night, October 22nd, the Rebels have now won the last seven games of the regular season, and haven’t lost since week two, giving them an incredible 8-1 record. Central is also a perfect 5-0 in their district, earning them the number one seed in the playoff bracket.
The defense set the tone early for the Rebels, quickly forcing a Farmington punt. On the very first offensive play, Daywhawn Welch caught a screen pass from Quarterback Jett Bridges for an 80-yard touchdown, putting them up 7-0.
After another defensive stop, Bridges found Ruger Sutton from 13 yards out for a touchdown pass, putting the Rebels up 14-0 with only 2:03 left to play in the first quarter.
In the second quarter, Farmington got on the board scoring a touchdown of their own on a two-yard run, cutting the Central lead in half 14-7. Then in an uncharacteristic play, Central fumbled the ensuing kickoff back to Farmington. However, Grant Manion picked off a pass to put the ball back into the hands of the high-powered offense.
It took only five plays to get back into the end zone, and Welch made an incredible play to end the drive. He caught an eight-yard pass at the goal line, but was immediately pushed back five yards. However, he never went down, and was able to shake off the would-be tacklers to take it to the house, making the score to 21-7 with 5:45 left in the half.
A few plays later, the defense came up big again, as Manion forced and recovered a fumble. On the first offensive play, Bridges then found Manion from 38 yards out to strike again, putting the score at 28-7 with 4:04 left in second quarter.
Then, a few penalties hurt Central and allowed Farmington to get into scoring position with only 16 seconds left in the half. The Knights scored on a two-yard run to again cut the lead, making it 28-14 at the break.
Central received the ball in the second half and wasted no time. On the first offensive play, Welch ran it 55 yards for another touchdown. The score was now 35-14.
The next offensive possession, Jobe Bryant got in on the scoring, catching a 37-yard pass from Bridges for a touchdown, making it a 42-14 game. After that, the Rebel defense held strong and forced a turnover on downs at the Central 12-yard line. Then, for the fourth time, Central scored on the first offensive play. This time it was an 88-yard run by Welch to put Farmington out of reach. The final score was 49-14.
Central ran only 30 offensive plays, but racked up an insane 550 total yards. Bridges was nearly perfect, completing 15 of 16 passes for 303 yards and five touchdowns.
Welch, however, was unstoppable. He had only six carries for 170 yards and two touchdowns, to go along with his three catches for 89 yards and two more touchdowns.
Sutton added six catches for 90 yards and one touchdown, while Bryant had two catches for 57 yards and a score. Manion had three receptions for 60 yards and a touchdown.
The Rebel defense was impressive, and allowed less than 100 rushing yards. Interestingly, Farmington actually possessed the ball for nearly 40 minutes, while Central had the ball for only eight.
The Park Hills Central Rebels couldn’t be in a better spot, firing on all cylinders, as they will now prepare for the first round of playoffs. Whoever has to face them could be in hot water.
The Rebels’ exceptional season has earned them a first round bye, so they will have an extra week to prepare for their first game in the District Playoffs.
Park Hills Central Football Finishes Hot