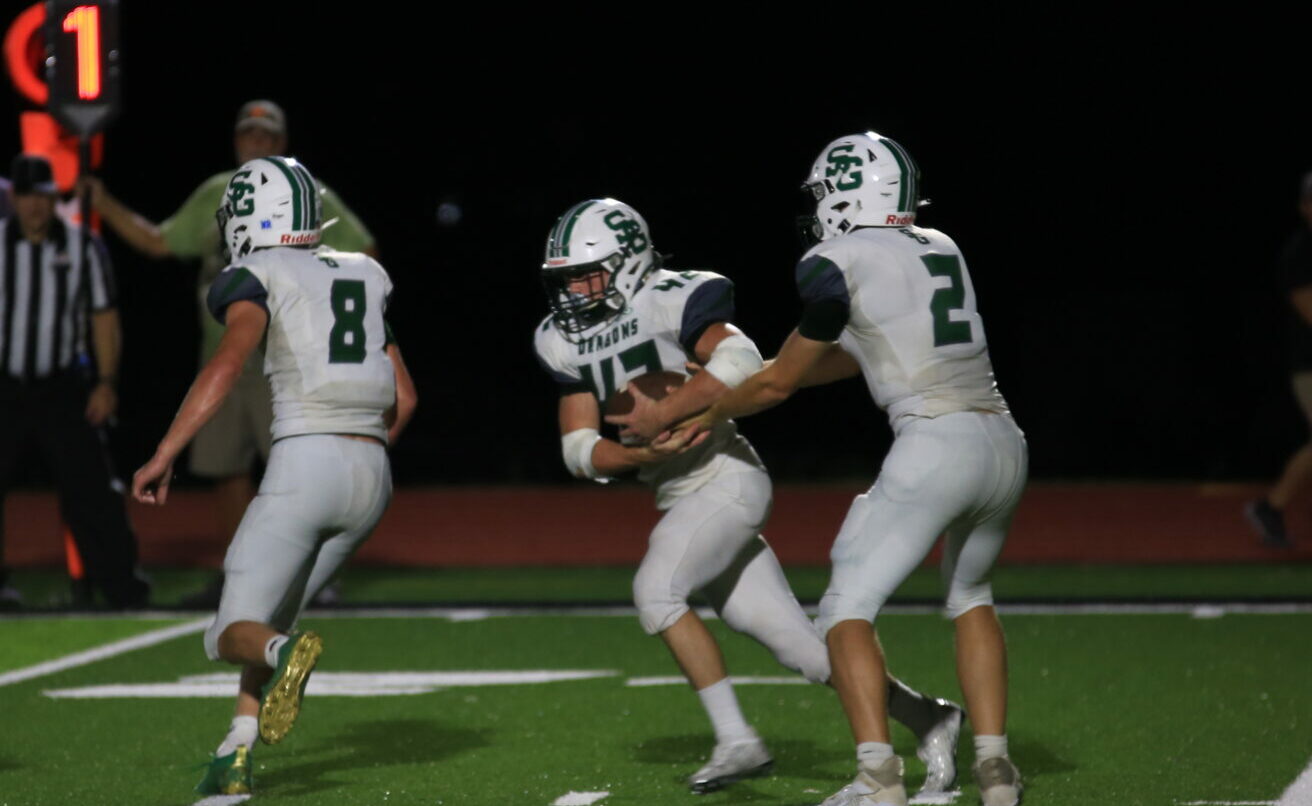 Ste. Gen Blasts De Soto 54-15 in the Battle of the Dragons

The Ste. Genevieve Dragons Varsity Football squad beat up on the De Soto Dragons 54-14 on Friday. Ste. Gen runs up against Brentwood on Friday, October 22nd in their regular season finale.

Ste. Gen loves to get points on the board quickly, and that’s exactly what they did in this battle of the Dragons. “Air BnB” picked up where they left off when Aiden Boyer heaved a 54-yard touchdown pass to Zach Boyer that opened up the scoring. Then the Ste. Gen defense put some points on the board when Kaden Flye returned an interception for a touchdown. Shortly after, Wyatt Springkamper caught a 26-yard touchdown pass from Aiden Boyer that put their team ahead 21-0.

Zach Boyer then gouged the defense once again when he carried the ball 64 yards into the end zone. Aiden Boyer tossed his third touchdown pass of the game to Kaden Buatte, which put Ste. Gen ahead 34-0 and capped off the first-quarter scoring.

Springkamper found the end zone again in the second quarter as well. This time it was a rushing touchdown from 16 yards out. Then, Aiden Boyer found Zach Boyer yet again for another bomb of a TD from 49 yards out. Ste. Gen went into the half ahead 48-0.

De Soto finally got on the board in the third with a 20-yard touchdown pass, and then the game fell quiet until De Soto scooped up a fumble and ran it in for a score. Cue Austin McBride, who put the cherry on top of the blowout when he ran in a 34-yard touchdown. Ste. Gen wrapped up the 54-15 victory and improved to 5-3.

Jacob Johns led the defense with four tackles, while Thomas O’Brien, Klayton Squires, Carter Burr and Bryant Schwent all had three tackles. O’Brien and Burr each had a sack. Flye had a tackle and a pick-six. Overall the Dragons held De Soto to 86 total yards of offense.

That’s two straight wins for the Dragons and their high-flying offense is in full effect. They score fast and often and it can be very hard for the opposition to keep up. They’ll look to keep it going on Friday, October 22nd when they run up against Brentwood in their regular season finale.

Ste. Gen Blasts De Soto 54-15 in the Battle of the Dragons