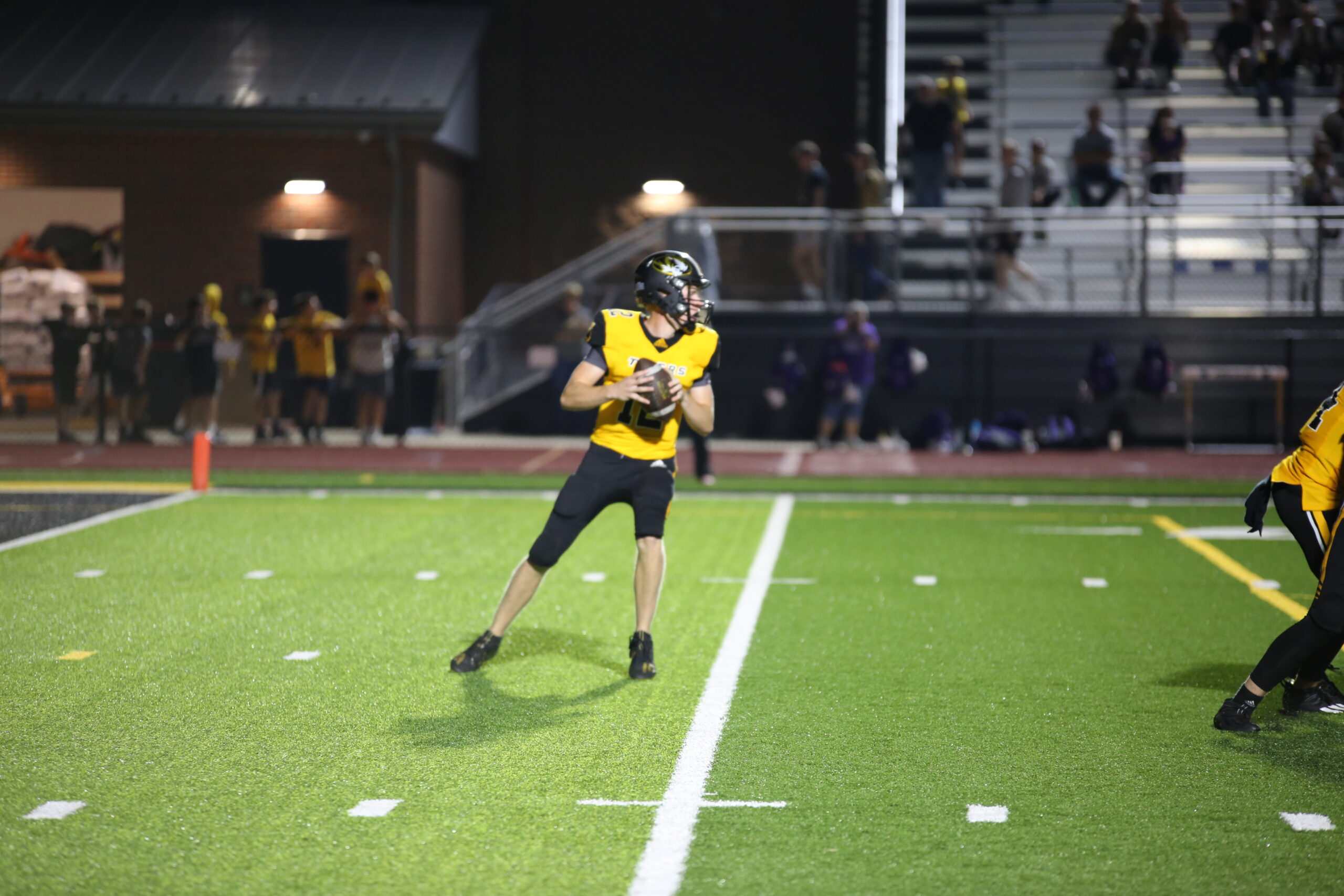 Tigers Hang On For Big Win vs Pacific

The Festus Tigers Varsity Football team rebounds from a pair of tough loses to secure a much-needed victory as they take down the Pacific Indians 35-32 on Friday.

The Festus Tigers needed a win like you wouldn’t believe, and in week seven Head Coach AJ Ofodile‘s team came through. The Varsity Football squad that had lost its previous two games in heart-breaking fashion, rebounded on Friday with a big fourth quarter comeback to take down the Pacific Indians 35-32 and move back over .500 with a 4-3 record.

The game started out on a sour note with the Indians finding the end zone at the 6:16 mark, but the Tigers got their offense moving just a minute and a half later when Dalten Yates ran one in from five yards out. That put the Tigers up 7-6, but they weren’t done in the first quarter. This time it was Landen Yates punching one in from four yards out, set up by a massive 82-yard run by Dalten, for a 14-6 lead as the quarter ended.

The second quarter then opened with a bang, as QB Cole Rickermann hooked up with old reliable, Isaac Stucke, for a 50-yard TD on a slant route that put the Tigers up 21-6. Sadly, that was just before the wheels came off of the Festus bus. The Indians went on to score four straight touchdowns, two of which closed out the half, making it a 21-18 game at the break.

The second half opened up with the final two Pacific TDs, and the Indians were staring down the barrel of a victory after three quarters. But the Tigers are a resilient pride and don’t give up easily. Rickermann got his offense moving again in the fourth quarter and found Stucke again on the slant for a massive 88-yard touchdown strike. L. Yates then ran in his second of the game from 14 yards out and Festus was suddenly up 35-32.

The Tiger defense held strong when they needed to (including a crucial interception by Trenton Young with just over two minutes remaining) and closed the door on any potential Indian comeback, but the most critical component on the stat sheet was the kicking game. Emily Holt made every one of her five attempts on point after tries, while Pacific’s legman went 0-4. Four missed extra points turned a 36-35 win into a 35-32 loss for the Indians.

Now back to the Tigers. The passing game was as efficient as ever with Rickermann throwing for 264  yards and a pair of touchdowns, while going 9-of-12. His favorite target in this one was Stucke, who caught four passes for 165 yards and both TDs through the air. Arhmad Branch was involved as well with a couple grabs for 55 yards, including one huge play that set up the game-winning touchdown.

As for the ground game, the Tigers leaned heavily on the Yates boys. Dalten ripped off 16 carries for 142 yards and a score, but had to leave the game with an injury late in the fourth quarter. Landen, however, made the most of his five carries for 89 yards and a pair of touchdowns. Pretty solid relief-rushing work on a day when feature back Kaian Roberts-Day was inactive.

D. Yates was available for comment about the big victory and had this to say, “It felt great to pull out the win. We had a rough start in the first half, but in the second half we really turned it on. We brought a ton of energy and showed a glimpse of how good we can actually be.”

The defense bent in the middle of the game, but didn’t break and Young’s interception was a key component to the much needed victory. The Tigers are now 4-3 on the season and look to keep the wins coming next week against a very tough Farmington team.

Festus will host this one though and should be able to use that to their advantage. Kickoff will be at 7 pm Friday, October 15th on the Tigers’ home turf.

Tigers Hang On For Big Win vs Pacific