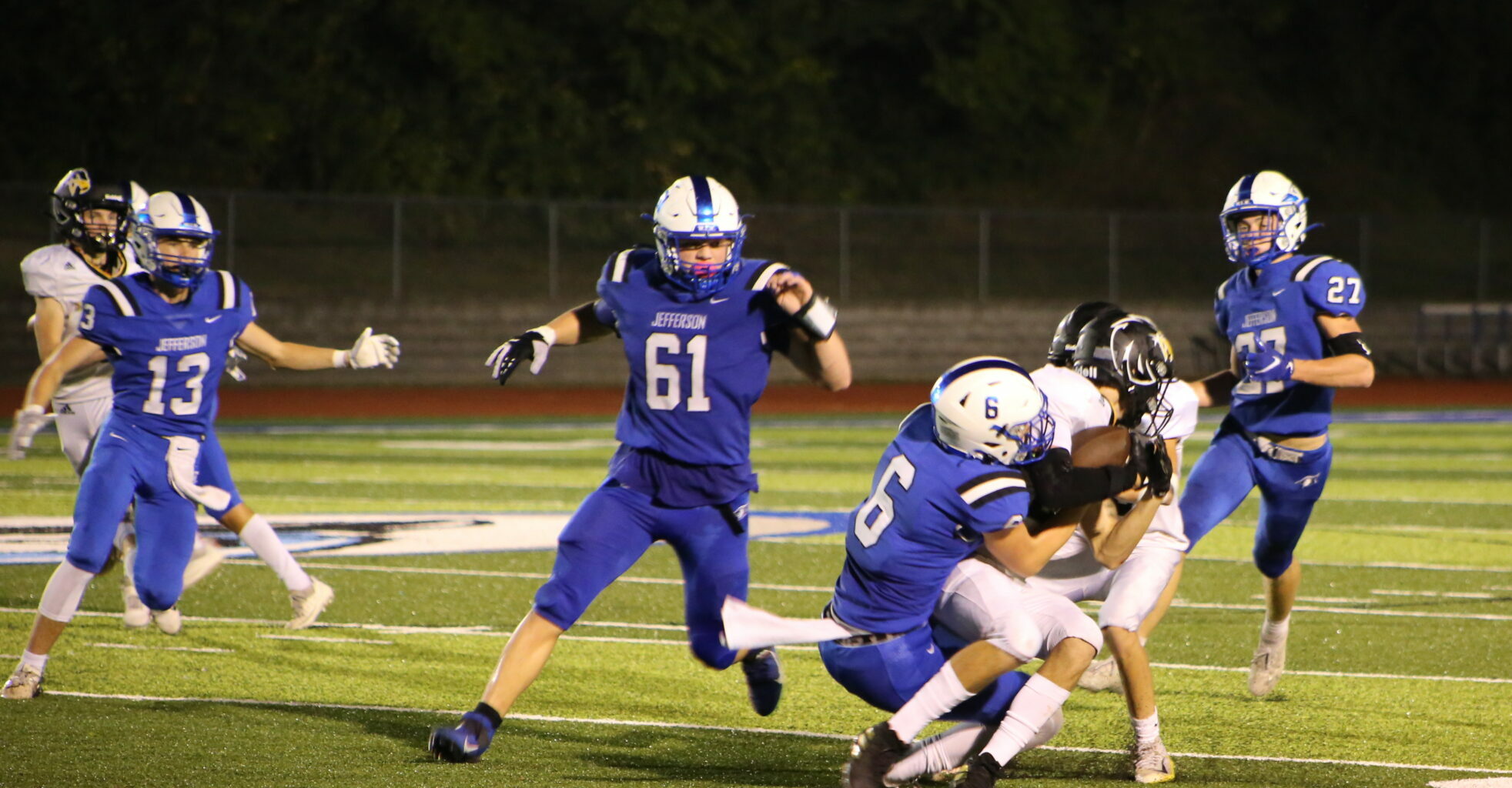 The Jefferson Blue Jays Varsity Football team’s offense put up 425 yards and seven touchdowns en route to a big 49-0 victory, putting the team back in the win column.

Last week, the Jefferson R-7 Blue Jays offense couldn’t score, as they found themselves on the losing end of a brutal 56-0 shutout by Valle Catholic. This week, the team found their offensive fire power and got right back in the win column. On Friday night, October 8th, the Varsity football squad came out guns blazing and smoked the Grandview Eagles 49-0.

Head Coach Alex Rouggly commented, “Our boys came out ready to go tonight. We had a great week of prep and that showed. I believe this was our best four quarters of football that we have played up until this point of the season. Our hope is that we continue this trend for the rest of the year.”

The scoring started quickly for Jefferson. At 9:37 in the first, quarterback Drew Breeze found Chase Politte from 27 yards out to take an early 7-0 lead.

In the second quarter, Sam Stokes caught a three-yard pass from Breeze to score the second touchdown of the game. The score would remain 14-0 for the rest of the first half.

In the third quarter, the Blue Jays really came to life. Will Breeze pounded the ball in from two yards to score a touchdown. The extra point missed, making the score 20-0. Next, D. Breeze found Colton Richardson for a 27-yard touchdown pass, and this time the extra point was good, moving the lead to 27.

On the next possession for Jefferson, W. Breeze caught a nine-yard pass for a touchdown. The Blue Jays were successful on the two-point conversion, making it a 35-0 game.

The team was successful on the ground too, rushing the ball 28 times for 171 yards. Usery did the majority of the leg work with 16 carries for 91 yards and one touchdown. Stokes had four rushes for 29 yards, while Gavin Theodoro had three for 24 yards.

Defensively, Stokes was the leader in tackles with eight, including three for a loss. Richardson had seven, while Jackson Combs had five. Politte and Breeze each had an interception as well.

Rouggly was pleased, and noted, “Our offense had over 425 yards and our defense gave up under 100. We were really pleased with all three phases of the game of football. We have to continue to have great weeks of preparation in order to continue to peak at the right time of the year. Our boys are ready for that challenge and I am excited to see how they continue to grow. This is a fun group to coach.”

Now the team will look ahead to next Friday, October 15th, as they prepare to face the Chaffee Red Devils and continue their winning ways.