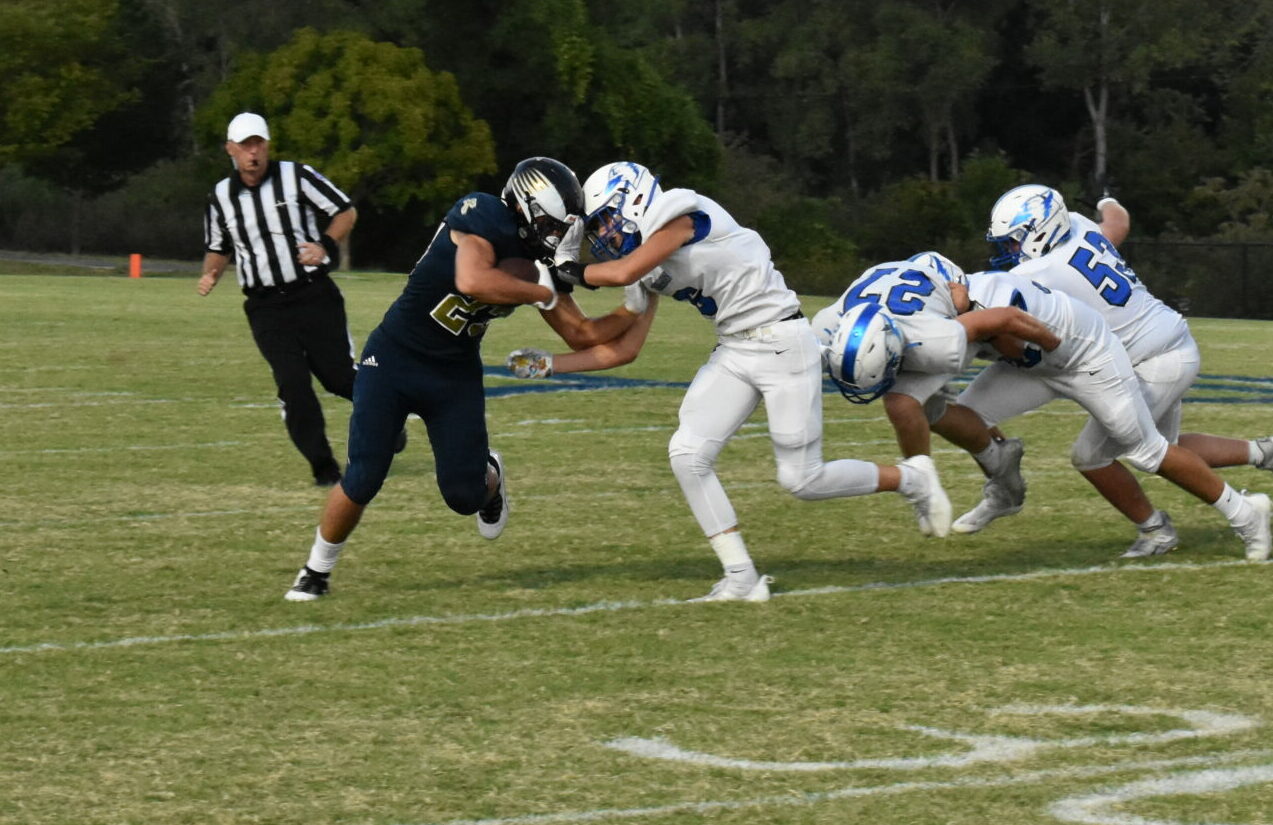 The Jefferson R-7 Blue Jays Varsity Football team suffers their first loss of the season at the hands of the St. Pius Lancers in an intense back-and-forth match-up, decided on the final play of the game. The Jays lose a heart-breaker 24-20 and fall to 3-1.

Last Friday, September 17th, the Jefferson R-7 Varsity Football team went to battle against St. Pius. It was a back-and-forth game that in the end, saw the Lancers of St. Pius defeat the previously undefeated Jefferson Blue Jays by the score of 24-20 in dramatic fashion.

Pius got on the board first with a touchdown putting up an early 7-0 lead. That’s all the scoring there was in quarter one.

In quarter two, the Blue Jays moved the ball well, but had to settle for a 29-yard Will Breeze field goal. Pius then answered with a touchdown and added a successful two-point conversion. After one half of play, the Lancers led the Blue Jays 15-3.

W. Breeze said, “We came prepared, but started slow because of a lack of discipline. This was an insane growing moment for all of us. I look forward to the rest of the season and I thank everyone for playing their hearts out!”

The third quarter started strong for Jefferson. Dylan Travica punched in a four-yard touchdown run to cut the Pius lead to five, making it 15-10. Unfortunately, the Blue Jay’s defense found themselves pinned in near their own goal line, and ended up giving up a safety. After three quarters of action, the score was 17-10.

Jefferson needed a big fourth quarter to turn it around, and it looked good early, as Travica again scored a touchdown, this time from three yards out. With the extra point, the score was now tied at 17.

With the clock running down, Jefferson worked the ball back into field goal range. With only 48 seconds remaining in the game, W. Breeze nailed another field goal, this time from 28 yards out, to give the Blue Jays the lead 20-17.

However, the game isn’t over until the final whistle blows, and St. Pius had other plans. With time running out, the Lancers threw up a 61-yard “Hail Mary” pass that was caught for a touchdown with no time left on the clock. When the dust settled, the final score of the game was 24-20 in favor of the Lancers.

Jefferson player Gavin Theodoro noted, “We played a very hard game tonight. We all played with everything we had, but unfortunately the outcome was not what we wanted. I think a positive was that we never gave up at any point during the game. Also, we need to focus on not getting as many flags. The focus for the rest of the season is to play with all of our heart and for one another, and the outcome definitely will show if we do.”

Jefferson Head Coach Alex Rouggly commented, “Tonight was a tough one. Our kids fought until the end and unfortunately were on the wrong end of things on the last play of the game. I was extremely proud of our kids’ fight to put themselves in a position to win this tough-physical football game. Our kids and program will grow from this and continue to move forward. There were many great individual efforts tonight, but I am most proud of the consistently solid teamwork our kids continue to have. Our kids have a lot to be proud of. Losses like these are always tough, but we will continue to fight to better ourselves and our program. Congratulations to the St. Pius Lancers on a hard fought victory.”

The now 3-1 Blue Jays will have a week to prepare as they set their sites on next Friday, September 24th, as Bayless will travel to Jefferson for a 7:00 p.m. kickoff.