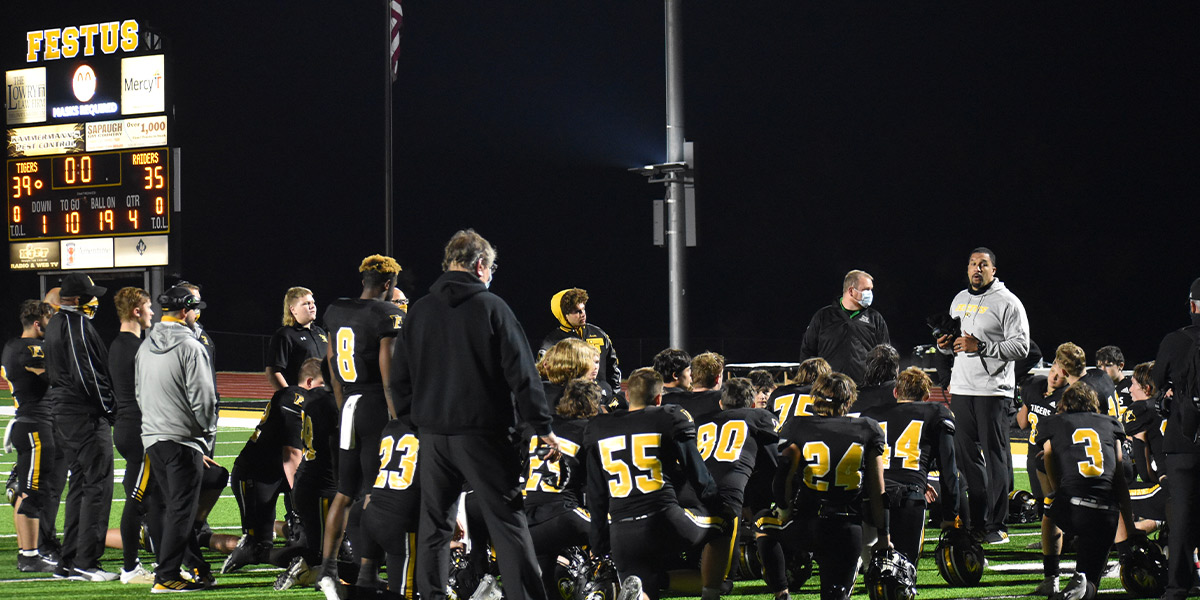 The Festus Tigers Varsity Football team make short work of the Sullivan Eagles with a 26-12 win for their first victory of the 2021 season.

The Festus Tigers Varsity Football team burst into the win column on Friday night with a 26-12 victory over the Sullivan Eagles.  The Tigers dominated on both sides of the ball and pushed their overall record to 1-1 on the young season.

Stalwart quarterback Cole Rickermann was at it once again in this one, going 12-of-13 and tossing for 262 yards and three TDs.  His big right arm anchored the offense for a second straight week and he has now accumulated an insane 606 passing yards and eight touchdowns through the first two games.

We asked Rickermann how important it was to come out and get the W tonight and what he thinks are the key things to keeping things rolling into week three.  The Tigers signal-caller responded with, “It was extremely important to come out with a victory in order to sort of get things rolling. Our defense really came out to play today. We just need to keep intensity up throughout the whole game and keep the pedal to the metal until the clock hits zero.”

Head Coach AJ Ofodile had his Tigers amped up and ready to roar for this one after a nail-biting 36-33 loss last week against Ste. Genevieve.  The Tigers came out with a bang in the first quarter.  Dual threat Landen Yates ripped off a 25-yard run for the first score of the game at the 9:14 mark and just like that Festus was up 7-0.  Sullivan got on the board about six minutes later, but the Tigers came roaring back two minutes after that as Rickermann hooked up with new addition transfer Eric Ruess for a seven-yard strike.

As the clock ticked over to the second quarter, the Tigers decided to put this one away.  Rickermann dropped a 97-yard bomb to Arhmad Branch to put the Tigers up 20-6.  Then with about four minutes to go in the half, it was Rickermann again.  This time a 45-yard strike to Landen Bradshaw for a 26-6 Festus lead.  That was all the scoring the Tigers would need the rest of the way.

Sullivan managed a third quarter touchdown, but the Tiger defense held strong and and blanked them the rest of the way.  Ruess and Dalten Yates (his second INT in as many games) were huge on defense once again and the collective Tiger D-men suffocated the Eagles’ overall attack.  Smart clock management, killing precious minutes and stout defensive work kept the Tigers from needing to put the ball in the end zone in the second half, and led to the 26-12 victory.

On the ground, Bradshaw led the way with 12 carries for 47 yards, but it was all about attacking through the air and keeping Sullivan off the board. Branch and Isaac Stucke led the way in the receiving department.  Branch had a pair of catches for 127 yards and Stucke had five grabs for 69.

Branch commented on his second consecutive 100+ yard game and some of the keys to success in tonight’s win.  “Just to come out focused and locked in. We came out and did just that and it showed. As for me, I was locked in on running my routes and catching the ball and it paid off tremendously,” he said.

Yates followed up with some comments as well, saying, “We fixed a lot of the mental mistakes defensively and focused hard in practice. It’s a step in the right direction, but we still have a few things to clean up.”

The Tigers are certainly glad to be back on the winning track after that tough week one loss.  They’ll see if they can keep the train rolling in week three as they return home to take on the Windsor Owls.  Kickoff is at 7 pm on Friday, September 10th.