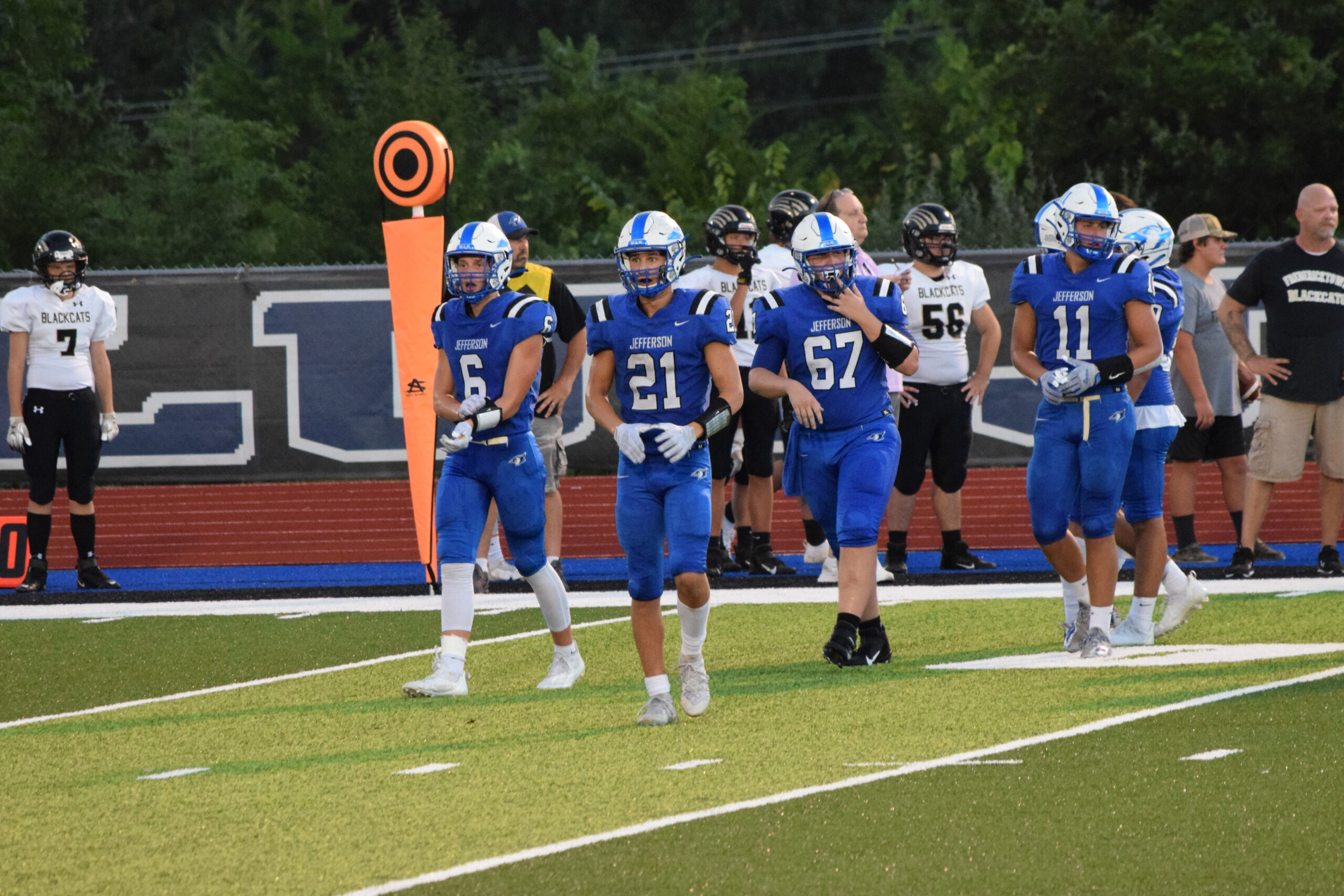 The Jefferson R-7 Blue Jays Varsity Football team’s high-powered offense posts 50 points in their home opener as they dismantle the Blackcats of Fredericktown.

The Jefferson Blue Jays Varsity Football team unloaded in their first win of the season, putting up 50 unanswered points, to defeat the Fredericktown Blackcats in the home opener, 50-0. The non-conference victory was a great way to start the season.

Head Coach Alex Rouggly was excited for the win, and said, “It means a lot to our kids. Being able to come out tonight and allow our kids to be who we know they are is a huge boost to their confidence. Our kids had fun playing the game of football tonight. That is what it is all about.” 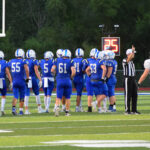 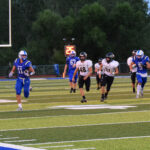 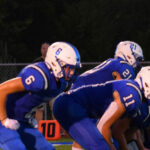 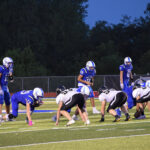 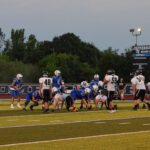 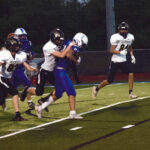 Rouggly said of his quarterback, “Drew is one of the best game managing quarterbacks I have ever coached in my 17 years in this profession. His calm, cool and collective demeanor speaks volumes to what he means to his team. He is willing to do whatever it takes to put his team in a position to succeed. That is what you want in that QB position.”

Richardson commented on his team’s success, and said, “It felt great to be back on the field with my team. I think what led to our win tonight is that we have something to prove coming off our season last year. Our expectations for this year is to all be leaders, because if you have guys that all act like leaders, it can take you a long way.”

At 5:31 of the second quarter, Gavin Theodoro scored a touchdown carrying the ball 23 yards. D. Breeze completed a pass to Nate Breeze for the two-point conversion. At 1:26, Sean Usery carried the ball five yards for another touchdown. The extra point was no good, making the score 35-0.

In the third quarter, Usery added on another touchdown at 7:26, scoring from one-yard out. W. Breeze tacked on the kick to make it 42-0.

The final touchdown of the game came from Karson Haefner on a 27-yard touchdown run. D. Breeze found N. Breeze again to tack on the final two points, for a 50-0 win.

Offensively, the team ran the ball 38 times for 329 yards. Usery led the way on the ground attack, with nine carries for 62 yards. Theodoro was just behind him with seven carries for 61 yards. Sam Stokes also had four rushes, good for 61 yards. Rouggly noted, “We had a committee of kids who carried the football. Not one of them had over nine carries. That says a lot to our depth and the continued growth of our offense. Stokes, Usery, Breeze and Theodoro had a great night rushing.”

The passing game earned the Blue Jays another 89 yards, on five of seven completions. W. Breeze picked up 41 yards on one catch. Richardson had 31 yards on 2 receptions, and Chase Politte had another 17 yards on two catches.

D. Breeze was amped up, and stated, “It felt great to be back with the team. I’m really excited for this year! We played physical and fast. We were flying around and getting stuff done. I have high hopes for this season. It’s a new Bluejay team! How can you not be excited?”

Rouggly was complimentary of his team and their performance. He said, “Friday Night was the perfect example of selfless football. Our kids have bought into the concept of each other more so than themselves and it showed. We came out with a point to prove. These young men had a great week of preparation. They battled through the adversity of the heat by having perfect attendance for two days of 5am practices. This group is hungry. We’re excited to see how we continue to progress.”

The Blue Jays will now turn their attention to next Friday, September 3rd, as the team travels to Cuba, MO to take on the Cuba Wildcats in another non-conference game.