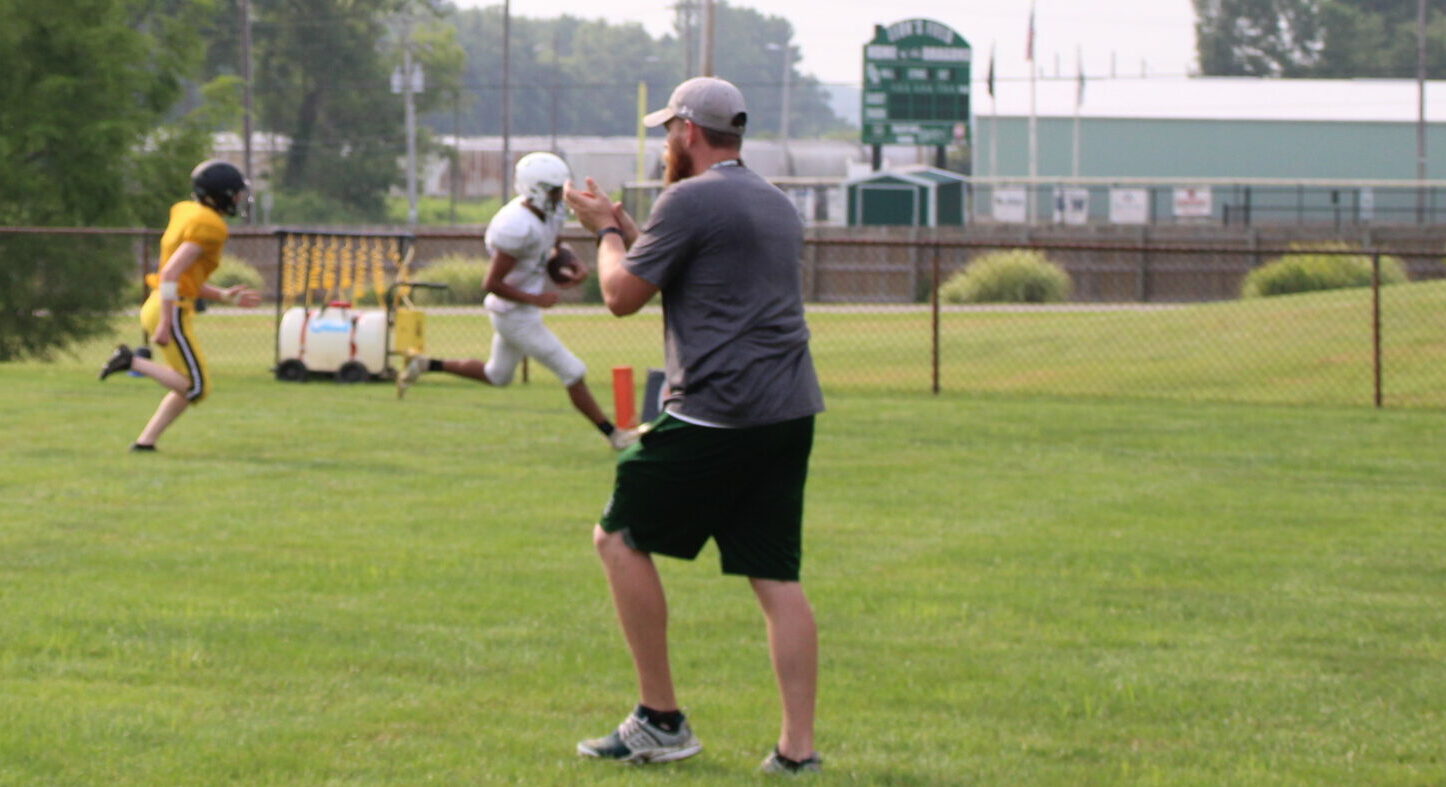 Ameritime Sports caught up with the Dragons’ new Head Coach Jay Pope, and asked him five questions on the new hire, his background and the upcoming season.

The Ste. Genevieve Dragons are moving in a new, yet somewhat familiar direction in 2021.  A change at the top of the coaching regime should shuffle things up after a somewhat disappointing 4-5 season last year.  The Dragons will turn to an experienced and familiar face as they bring in Jay Pope to take over head coaching duties.

Coach Pope was a part of Ste. Gen’s football program as recently as 2019 and knows the organization well.  He’s also coming off of a State Championship season as an Assistant Coach with the Jackson Indians.  Pope has football experience in spades, is an exceptional motivator and a heck of a good guy.  Ameritime Sports caught up with Coach Pope and we asked him five burning questions about his transition to his first head coaching job and what the season ahead looks like for the Dragons.

1. You have an extensive football background, but this is your first season coaching the Dragons.  What determining factors led you to make the move and take over the Ste. Gen program?

“It was a culmination of several things. First and foremost, having served in the district previously, I knew that Ste. Gen. High School has outstanding people working within its halls, and I consider many of my colleagues as great friends. Additionally, after serving the Jackson Football team, and reflecting back on the 2020 season, I came to the realization that there was probably nothing I could ever do as an Assistant Coach to surpass that experience. The natural progression at that point was to wait for the right opportunity as a Head Coach to present itself and pursue the challenges that come with that job title. So, when the position came open at a school with a rich football tradition, in the town I have spent my entire life, it seemed like the obvious perfect fit.”

2. A new organization can be tricky to breakdown and discern in the beginning, but what are your expectations for the year and is there a shot at making a playoff run with your new squad?

“Honestly, I don’t view it as a new organization as I was on the football staff for the 2019 season. Serving the team for that year allowed me to get familiar with the players and coaches, so coming back in, I had a good sense of how the organization operated. As far as expectations go, we don’t focus on results, we focus on the small steps that will make us better each and every day. Every team expects to win, every team has the same goal of winning trophies, but it’s the process that separates the teams from their goals; we choose to focus on the process.”

3. You coached at Valle as well.  Is the head-to-head matchup with the always-formidable Warriors your biggest test of the year?  And do you think your time at Valle gives you an edge?

“Valle is always a big test, regardless of the year, as they are so well-coached. To say they’re the biggest test of the year though would be disrespectful to the other great teams on our schedule. The biggest test of the year will always be whoever the Dragons are playing on that given week. If anyone thinks they have an edge on Valle they’re delusional. The only thing that comes close is the assembling of all-star teams that some of the St. Louis private schools have done in recent years.”

4. You were also an assistant coach at Jackson.  Did you pick up anything along the way working with Coach Naeger (Valle) and Coach Eckley (Jackson)?

“I’ve been very blessed to have worked for these two great men, both of whom will inevitably end up in the Hall of Fame. Their football acumen puts them in the ranks of some of the best to ever wear a headset, but what sets them apart from others is their ability to lead their teams and communities. Both are great models of leadership and sacrifice, and their success is the direct result of those characteristics. They have taught me countless lessons and I am very grateful to consider them as not just mentors, but also great friends.”

5. Do you have a long-term plan to grow the Dragon program and bring some hardware back to Ste. Gen?

“The long-term plan can be summed up by the team’s theme for the 2021 season: Raze The Standard. Everyone associated with the football program at Ste. Genevieve High School must raise their standards in everything we do; whatever you’re currently doing, be the best at it. “Good enough” is no longer acceptable, and we hope that mindset leaks over to the other areas of the players’ lives. Don’t set out to just be a good enough friend, an average student, and an okay person; be a great friend, be an overachieving student, and be the best person you can be. If we can instill that approach to life in every student-athlete that comes through the program, then we will be more successful than any hardware can ever denote.”

The respect he shows his competition, the motivation to better his athletes’ lives along with their play on the field and the philosophy to focus on one week at a time are just a few of the characteristics that will surely make Coach Pope an instant and positive impact on the Dragons’ organization.  Here’s to Coach Pope “Razing the Standard” in 2021.

Good luck, Coach.  And good luck to your Dragons.