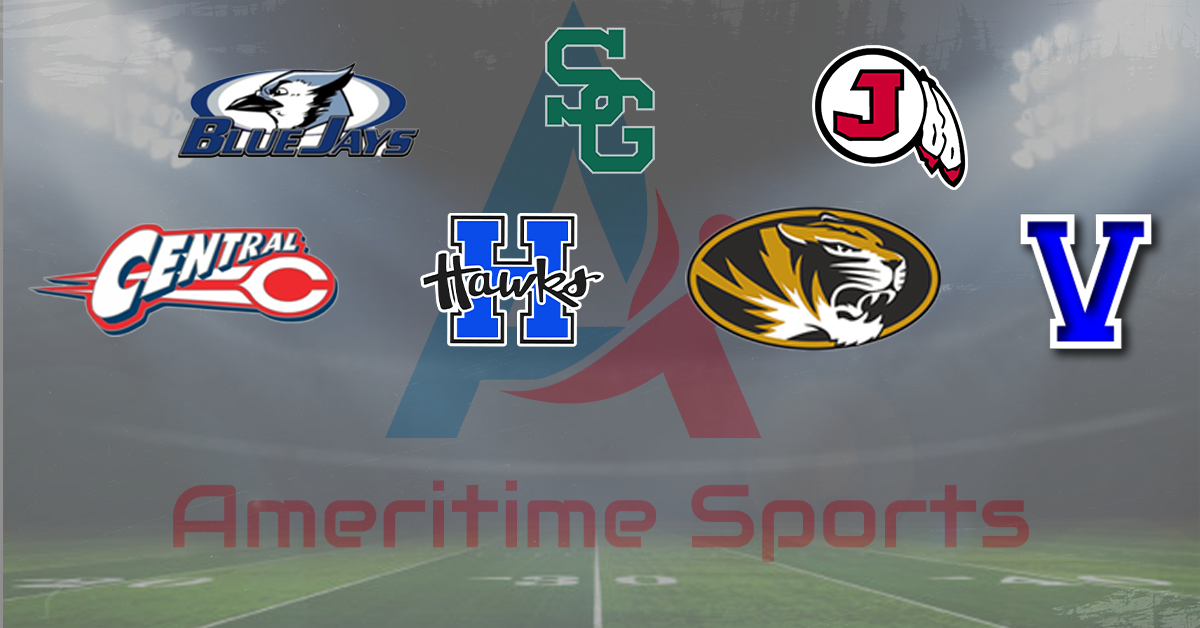 Ameritime Sports will be expanding its football coverage in 2021, adding three new schools to the roster. Park Hills, Jackson and Valle Catholic will all receive in-depth Ameritime coverage this season.

The Ameritime Sports Team is excited to announce our debut campaign of expanded football coverage for the upcoming fall season.

One of the newest additions to the Ameritime lineup is the Jackson Indians. Jackson has had an incredible run the last three seasons that includes a Class Five State Championship in 2020 and a Class Five State Runner Up performance in 2019. They have a record of 38-2 in their last three seasons combined and have not lost a game since December 7th, 2019. They dominate games week in and week out and we can’t wait to see what they are capable of in the coming seasons.

Another new addition to the Ameritime family is the Valle Catholic Warriros. The Missouri football record books could not be written without Valle Catholic. They have 15 State Championships in their school’s history, with the most recent coming in 2019. The Warriors have won six State Championships since 2009 and have finished as the runner-up three times as well. They are a perennial football powerhouse and should be a ton of fun to keep up with this season.

The Park Hills Central Rebels are also a new addition to Ameritime Sports Coverage. The Rebels went on a run of six straight District Championships from 2012-2017. They have been working to get back to their dominant ways in the past three seasons, and are off to a good start, as they capped off an 8-2 campaign with a loss to Cardinal Ritter in the playoffs last year.

The Ste. Genevieve Dragons are coming off of a 4-5 2020 campaign. This was their first season under .500 since 2010. Ste. Gen has a new head coach taking the ropes for the 2021 Ste. Gen squad and Jay Pope is motivated to get back to their winning ways in this upcoming season.

The Hillsboro Hawks are back and looking to improve on their 5-5 finish to the 2021 season. From 2011-2017, the Hawks did not finish a single season under .500 and snagged two district championships along the way.

The Festus Tigers are coming off of one of their best seasons to date. They finished with a record of 10-2 and a District Championship. They lost to Union in the Quarterfinals of the Class Four State Playoffs. They return many key players and are looking to improve this season.

The Jefferson R7 Blue Jays are coming off arguably one of the best seasons in their school’s history. They finished the year 9-3 and captured a District Championship. R7 started the year 2-2 before rattling off seven straight wins that led them all the way to the Final Four of the Class Two State Playoffs. Unfortunately the journey ended there with a loss to Lamar. The Blue Jays are going to do their best to carry over some of that success into this season.

Overall, Ameritime is very excited to add these great new schools to our pool of coverage. Follow any and all of these teams’ journeys through the 2021 season at Ameritime Sports.